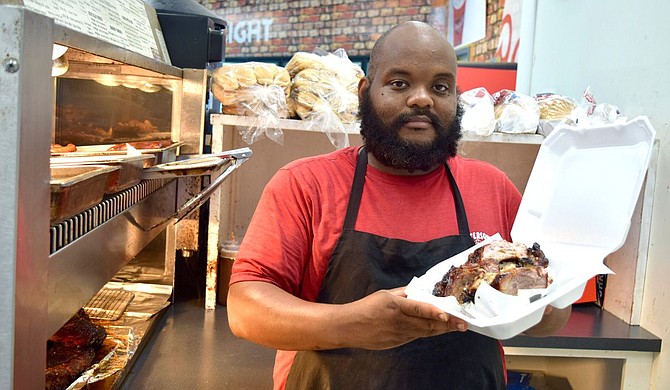 Growing up, Roche Jefferson enjoyed watching his grandmother and mother cook and has since opened his own barbecue business, Jefferson’s Grill, which currently resides within a Velero station on Old Canton Road. Photo courtesy Shaye Smith

When Jackson native Roche Jefferson was studying political science at Hinds Community College in Raymond and later at Tougaloo College, the Lanier High School graduate expected to break into the governmental-affairs field as an elected official

Instead, Jefferson entered the food industry around nine years ago, working as a manager for two years before opening his own restaurant and catering service, Jefferson’s Grill. The barbecue establishment originally opened in Byram but has since changed location a handful of times before settling into its current station on Old Canton Road.

Recently, Jefferson spoke with the Jackson Free Press on how he started his business and offered some tips that others lighting up their grills this summer can implement in their own cooking.

Tell me about the journey you went through to become a cook and start your business.

I got into barbecue back when I worked full-time for Hinds Community College in Raymond in student housing. The department would always tailgate at home games, and they would let us do it on the field, on the track. That’s when I developed many of my barbecuing tricks and trades, so to say. We’d be out there with everybody eating, and I remember telling one of my student workers, “You know, I think these may be good enough to sell.”

Beyond the practice you had preparing it at home games, were there other reasons why you wanted to focus on barbecue cuisine for your restaurant?

Barbecue is one of my favorite forms of food. Once I got into it, I realized how much I enjoyed it. … It worked for us, worked for me, and we just stuck with it.

Do you have any grilling tips that you live by?

One of the things I would always encourage people to do first and foremost is to purchase quality meat. The quality of your meat plays a big role in the quality of your product. That’s one thing I like to brag on: At Jefferson’s Grill, we use top-grade products. (For example), even though they are very expensive right now, we use baby-back ribs. They’re our number-one seller.

Second of all, for the people who are using charcoal or wood, I would say that you gotta be sure you’re able to control your fire. That plays a very, very huge part in the texture and the overall flavor of the meat. You gotta be able to get the right temperatures. My pit may be different from your pit, so you have to understand your equipment and what you’re working with.

What are some easy mistakes people make while barbecuing, and how can people avoid them?

The most obvious mistake I’ve seen people make that I’ve observed is the overuse of lighter fluid, propane gas and similar accelerants. Sometimes, people cook meat too fast, which rushes the outcome of your product.

Oftentimes, you gauge the doneness of meat by the color. When people cook the food too quickly, the outside appears done, but the inside isn’t there yet. A lot of the time, the outside will look beautiful, but when you bite into it and actually eat it, you can tell it’s been cooked too fast because the meat is not as tender as it should be.

Sometimes you’ll see someone go out in the backyard and take a liter or gallon of lighter fluid and think they’re supposed to use it all just because they have it. You can tell because it’ll be like you’re fighting a fire sometimes. Once you get the grill lit and you have the greases and juices from the meat falling, it becomes easier for the grill to flame up real quick, so you have to be careful.

Additionally, when it comes to grilling, just by natural course the grill can become hotter in some spots than it is in other spots, so one of the best things to do is to always identify your hotspots so that you can pay a little bit more attention to them so that you don’t end up burning your food.

How does Jefferson’s Grill cook its meat?

We old-school barbecue meat. I’ve studied the industry in our area. A lot of people have gone to using propane smokers where you don’t have to use a lot of charcoal or wood, and I understand why they do it because it does make the job easier. But we are old-school. We don’t boil our meat before we do anything with it; we clean our meat, we season our meat with our special rub, and we put it on the grill. Now the way we do it, I’ll admit, is much more difficult—it’s a whole lot more work—but we do it the way it’s been done for a long time.

Do you have any preferred beverages to drink with barbecue?

I have seen across the South a beer and barbecue concept being developed. I do not drink alcohol myself, but I will tell you that in my opinion, especially when you’ve been outside, that there’s nothing like some good ole lemonade. I think of barbecue as heavier food, so something light like fruit juice or lemonade feels like the way to go.

Did you have anything else you wanted to say about you or your business?

Southern barbecue is a good food industry to be in, and the support in this area is really strong. We’re proud to be one of the leaders in the barbecue scene in Jackson and especially in the gas-station setup as a leader in gas-station food.

We’re really proud of that.