‘Figure Pulled Out of the Sky’: Mayor Swipes at Council for Approving $500,000 for Deputies | Jackson Free Press | Jackson, MS

‘Figure Pulled Out of the Sky’: Mayor Swipes at Council for Approving $500,000 for Deputies 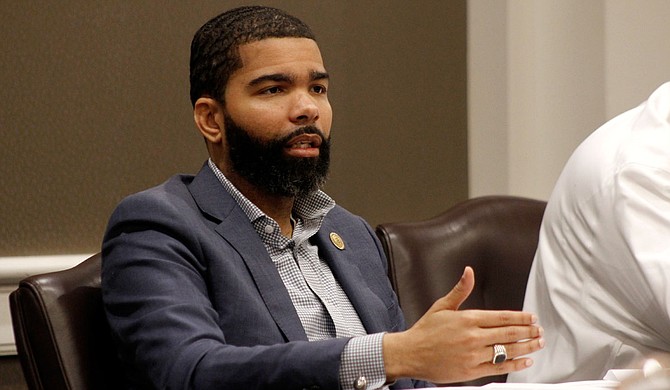 Mayor Chokwe A. Lumumba said providing $500,000 for more Hinds County sheriff's deputies to work in Jackson is a misdirection of funds. File Photo by Stephen Wilson

Putting $500,000 into the hands of the Hinds County Sheriff's Department to put deputies in the capital city is "fiscally irresponsible," Mayor Chokwe A. Lumumba told the Jackson Free Press in a phone interview on April 3.

The Jackson City Council on March 30 passed an order "authorizing the Mayor to execute an interlocal agreement" between the City of Jackson and Hinds County to provide $500,000 to "engage deputies of the sheriff of Hinds County" toward public safety.

The mayor said such resources can provide additional and needed resources to the Jackson Police Department, for youth and mental-health programs, and other "programmatic solutions that can help with the issue of crime."

At the council’s March 30 meeting, Ward 3 Councilman Kenneth Stokes brought up the order, which eventually passed 5-2. “We need to be concerned about all citizens in this city; everybody knows that we need some sheriffs on the ground," Stokes said. "Give them a chance; if it doesn't work out—fine, but at least we try. People deserve to be safe in our city by any means necessary."

Ward 1 Councilman Ashby Foote asked where the $500,000 will come from since the order did not indicate it. Stokes said it will come from the fund balance, which is money unspent from the previous budget period.

The mayor said that the council is not considering future emergencies, debt and bond-servicing needs of the City by proposing the idea of taking money from the fund balance. "What you have to understand (is that) the council has no real understanding of where money is (and) what's going on," Lumumba told the Jackson Free Press. "So they just throw (a figure) out, not considering the fact that in the fund balance, we have a myriad of things that we have to pay for."

"You had all of the debt that we have for institutions that have not been functioning, such as Thalia Mara Hall; you have the debt for the convention center that we have to help them pay," the mayor added.

"We're the backstop because the convention center hasn't been opened in the midst of the pandemic, you have all of these things that the expenditures have not yet come up,” the mayor continued. “But we've been holding them because we know that even though those institutions haven't been functioning, we still have to pay. We still have to support them because the bills still come due."

Lumumba pointed to the lack of details of the proposed interlocal agreement, saying it's "backward" to give the money before clarity on its use.

"(The) legal (department) can't actually even create an order until there is some direction of what is to be ordered and what is to go forward, and what is the interlocal agreement and how does it function, how does it work?" the mayor said. "And to be honest, my conversations with legal (is that) they don't even really know where to begin because it's so nonspecific, is so ambiguous, that (it) is difficult to create a plan around (it)."

After the council approved the order on March 30, with Ward 5 Councilman Charles Tillman and Ward 7 Councilwoman Virgi Lindsay voting against it, Interim City Attorney Monica Allen said at the meeting that she doubts if the Mississippi attorney general's Office will approve of an interlocal agreement that lacks specificity.

"We need specifics," she said. "The order that was passed, that can be the terms, but I don't know if that's going to pass the muster of it getting approved by the AG's office."

In the interview, Lumumba also said the math on what the order’s supporters promised didn’t even add up.