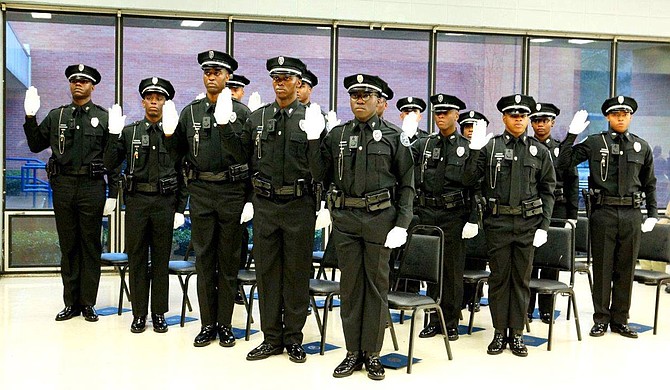 Recruits to the Jackson Police Department will now earn $30,000, up 15% in the 2020-2021 financial year budget from the previous $26,000. The Jackson City Council approved the budget increase at a special meeting on Sept. 10, as well as improved health-insurance coverage for single City employees.

The finance committee met 11 times between Aug. 10 and Sept. 3, listening to presentations from different departments and finalizing the budget details. The council had insisted on a better pay scale for the police as part of the budget to make JPD pay more competitive.

Mayor Chokwe A. Lumumba said that the new pay scale makes a JPD officer's salary on par, if not better than, what surrounding jurisdictions offer. After one year, recruits will get $31,000; in their third and fifth year, they will earn $33,000 and $35,000, respectively. Those currently in service will get pay bumps corresponding to their years in service. An officer presently gets a pay increase from about $26,000 to $31,659.72 after the first year in service, and the next pay increase is in the 10th year.

"In addition, we are offering to pay their health insurance," Lumumba added. "They will have more take-home in Jackson. It is better than Pearl; it is better than Vicksburg."

"We are doing a very significant thing to try to change things in Jackson to make us a safer city, to make us a city where people want to work so we stop losing the talent battle," he said. "What we are doing on the health-care front is not free health care. We are subsidizing premiums so that people don't have to pay biweekly chunks out of their paycheck to be a part of our system. They still have to pay deductibles. They still have to pay co-pays."

Ward 5 Councilman Charles H. Tillman moved a motion for an amendment to the budget to add to the number of chief deputy council clerks from one to three.

"Looking at the city council budget, there is a need, in my opinion, to restore the two chief deputy council clerk positions." he added. The amendment passed 5-2.

Ward 3 Councilman Kenneth I. Stokes proposed another amendment for contracts with other jurisdictions to offer jail spaces for misdemeanors, saying it will help make the city safer.

"We need to have jail spaces," he said. "We can rent jail spaces for misdemeanors and have a place to take them. The money will come from the savings of this budget year, from the fund balance."

When Banks questioned him about the price tag for that proposal, Stokes said $500,000.

Stokes said that it is not acceptable to make arrests and then immediately release those who offend because there is no place to put them.

"It's coming from the police department concerning the misdemeanor holding facilities that they are arresting these people on misdemeanor (charges),” Stokes continued. “They are not taking them in jail, Hinds County is not taking them, they don't have room for them, and everything else, so they are releasing a lot of them, and you send a message to a criminal that it's OK to do crime.”

However, the mayor said for the move to be successful, there are hurdles to cross.

"We acknowledge the issue, and I think there are some questions that we need to answer in the process," he said. "We will need some cooperation with the county. Even if we are talking about sending inmates to another county, you have to get them to and from the court; all of that transport has to take place, so we will look into that."

He said some of the issues involving the release of some people from jail go beyond JPD.

"I want people to understand what the issue is because JPD gets a bad rap on it, where they are actually arresting people, and there is a call that literally goes out on the radio that says no misdemeanors, nothing but violent crimes and DUIs coming to the jail. That is literally out of our control."

He said the novel coronavirus virus pandemic adds to the issue.

"There were a lot of inmates before COVID that were released," he said. "It went under the radar, nobody even knew about it. I think it was like 80 or more people that were released because no cases have been going to trials."

"Then you have people that are being dropped off in the city," he added. "So we recognize the problem. That may be the solution, but there are some questions that we have to fill in before we will be prepared to go in that direction."

"I like it when an issue like this comes up, (that) somebody really takes the time and study and brings it back to the city council," he said. "It's a good idea, but I want to make sure we vote on something we can actually afford … rather (than) just (allocating) money and then going out and trying to plan it. It might cost more than $500,000, and then we start, then stop. I just like to see a big plan first."

"I will like more information, and if we wait a couple of weeks, we still can deal with it," Lindsay said. "I just would like for it to be presented to us with real comprehensive information on how it's going to work. But I do think we need to move on it quickly."

Three council members were opposed to Stokes’ amendment—Priester, Ward 5 Councilman Charles Tillman and Ward 7 Councilwoman Virgi Lindsay—but the measure passed 4-3 with Banks and Ward 4 Councilman De’Keither Stamps and Ward 1 Councilman Ashby Foote joining Stokes. Banks said that if approved, the mayor should negotiate with other jurisdictions that can offer the spaces.

"I will say Councilman Stokes, that is something that I agree is necessary in fighting crimes," he said. "If this passes, mayor, I think it's been a (while) since we had anybody in the executive to negotiate with the others," he said. "Like with Madison, Ridgeland, I do know that the price is high, it's anywhere between $36 and $40 a day, but I trust that you will negotiate that if this passes."

Stokes wanted another $500,000 to fund an initiative to bring reserve deputy sheriffs into the mix of law-enforcement personnel in the city.

In response to that move, Stamps said it is also essential to not just focus on the law-enforcement part of the crime picture.

"I appreciate the move to strengthen our police force and putting (money) towards (it), but we also have to balance that by putting money towards economic development," he said. "Because when a man can pick up a paycheck, he'll put down a gun, and so we have to have that balance as we focus on what needs to happen for the future."

The mayor also wants attention paid to other things beyond law-enforcement, but he did not mention what those things are.

"We could be putting money into a space that will not do what you are attempting to do," he said. "I agree with the notion that the issue of crimes is bigger than the issue of policing."

"Policing is a part of the problem," he added. "There are other things we need to look in and invest in."

However, Foote quickly responded by saying, "I think police is part of the solution."

A few moments later, the mayor denied saying the police is part of the problem, which he clearly stated.

"And so we are fully prepared and want to do that," he said. "But also there are some components that we are not talking about. When a man decides that he's going to kill his mother and his sister, the police can't be there; when people are shooting people in hotel rooms, the domestic violence that we are seeing, the police just simply will not be in those rooms; and so when I say that it's deeper than that, it's not taking away the component that the police solve, it's looking at the (other) components, that if we are serious about crime, if we have to do something, then we should take a full view at the problem, that is what I am saying."

The motion to fund reserve deputy sheriffs failed by a 2-5 vote, with only Stokes and Foote voting for it.