'We Are Beat Down’: Citing Crime and Defying Mayor, Council Clears $500,000 for More Deputies 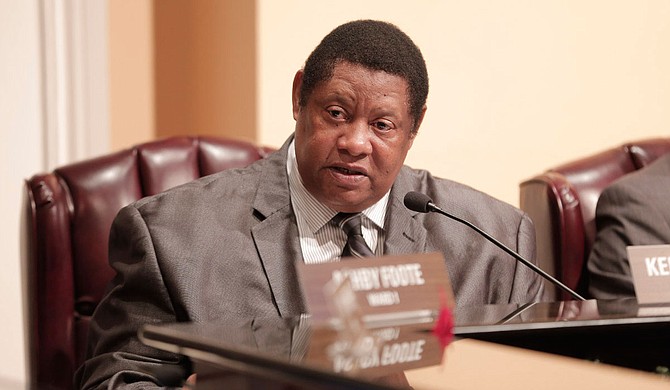 Ward 3 Councilman Kenneth Stokes said at the Jackson City Council meeting on March 30 that getting more deputies on the streets will help with security. File Photo by Imani Khayyam

The Jackson City Council has approved $500,000 for the Hinds County Sheriff’s Department over the objection of the mayoral administration and two council members in an agreement that no one has put on paper, yet. On March 30, in a 5-2 vote with Council Vice President and Ward 5 Councilman Charles Tillman and Ward 7 Councilwoman Virgi Lindsay opposing, the council passed the order proposed by Ward 3 Councilman Kenneth Stokes, a former member of the Hinds County Board of Supervisors.

The order is for an interlocal agreement between the City of Jackson and the Hinds County “to engage deputies of the sheriff of Hinds County to assist with public safety activities within the City of Jackson.” It is tied to the two resolutions the city council passed on Oct. 13, declaring a crisis of violence in the city based on increased reported crimes and calling for assistance from the county and federal law enforcement officials.

Stokes first introduced the item at a Sept. 10 special council meeting for budget approval. The council shut it down in a 2-5 vote at that time after it approved $500,000 to rent jail beds in nearby counties for misdemeanor offenders.

"(Jackson Police Department,) you're doing a good job. I had to call them all the time, but they need some help," Stokes said on Tuesday. "As soon as (crime) keeps spreading from the poor neighborhoods to Wards 1 and 7, then y'all gonna say, ‘we need some help.’"

"We need to be concerned about all citizens in this city; everybody knows that we need some sheriffs on the ground," he added. "Give them a chance; if it doesn't work out—fine, but at least we try; because next, I'm asking for the National Guard. People deserve to be safe in our city by any means necessary."

Tillman and Lindsay said their reticence in approving the measure is due to a lack of detail about the interlocal agreement. "I just have some real fundamental objections to funding them when we know our police department has so many needs, and I have not seen the plan," Lindsay said.

Council President and Ward 6 Councilman Aaron Banks said Hinds County Sheriff Lee Vance presented a plan to the planning committee, and the order moves the process forward. But Tillman, a member of the planning committee, said that plan should be written down. The Hinds County Board of Supervisors has to concur at a later date, Banks explained. Vance served as Jackson police chief previously, but stepped down from Mayor Chokwe A. Lumumba’s administration and later ran for sheriff.

"We budgeted (this year) for 402 (Jackson police officers, but) we froze 50 positions, that's 352. Even if we throw extra money at it, they cannot go above 352 because they're locked at 352,” Banks said in explanation for the order’s rationale. “What we talked about in our planning committee (was) that (it is for an) additional 50 officers from the Sheriff's department, since we're locked at 352."

Tillman suggested amending the budget to unfreeze the positions, but Banks said that will mean reversing the salary increase for entry-level JPD officers.

Ward 2 Councilwoman Angelique Lee and Ward 4 Councilman and District 66 Rep. De'Keither Stamps said their support for the move is not an aspersion on JPD, but a response to dire security needs.

"(JPD) can have all the recruit classes in the world, but our attrition is not outpacing our demand on (policing) hours," Stamps said. "If the police department came in today and say, I need more money, let's put the item on their agenda and discuss it, I'm ready to vote for it today.”

"But right now, we need more visibility, especially in our higher crime areas in peak crime times," he added. "And the fastest way to do that is to get the sheriff’s department some additional resources so that then they can do it."

Stamps said this is not a long-term investment, but a new approach for an immediate intervention to "get a handle" on the problem of crime in the city "before summer break." "We are beat down, and we need help. Our police officers need help," Stamps said.

Councilwoman Lee said the number of homicides already recorded in 2021 is a cause for concern. "We're at our 36th homicide in 2021, and I've spoken to some members of the sheriff’s department, and they are ready to come in and assist JPD," she said." And I think they need us to support them with the resources to do that."

Mayor Lumumba said a one-time city donation of $500,000 to Hinds County is not enough without continued support for existing police officers and noted that the Jackson Police Department needs more resources. "JPD has a multitude of needs," he said. "So even if you didn't want to expand the number of officers that we were adding, there's other resources and other things that they're asking for each and every day that we're trying to meet."

City of Jackson Chief of Staff Safiya Omari said that since the sheriff’s department has an obligation to the city, as part of the county, there is no need for a different payment to do their job.

"And I've heard several council people say this is not a slight to JPD, but if you're fighting to give half a million dollars to another agency, you're taking resources of much-needed resources away from our own police department," Omari said. "We have to be very judicious in how we spend our funds and paying the county for what they're already obligated to do. (It) just doesn't make sense to me. [It] doesn't seem like it's a sound fiscal decision."

Sheriff Vance said that the money would help him put more deputies on the ground in Jackson in an interview in February with WLBT. "It will be to hire officers while they are off duty, and working overtime because we cannot pull from other parts of the county, just to put inside Jackson,” he said.

"The proposed interlocal cooperative agreement would continue from the effective date as until such time as the crisis has been abated, the funds have been expended, and the activities contemplated by the interlocal agreement have been completed," the order said.