City in the Grass at the Museum, Connect JXN and MPB Classroom TV 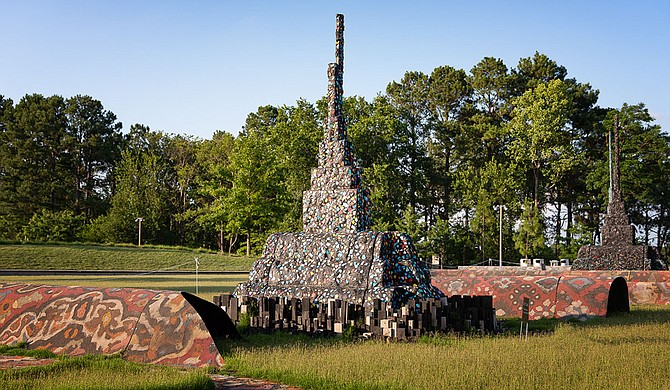 The Mississippi Museum of Art debuted a new exhibit called "Leonardo Drew: City in the Grass" on Saturday, Sept. 26. The exhibit, which New York-based artist Leonardo Draw created, is a participatory, public art sculpture that the museum encourages people to directly interact with along with the space it occupies while maintaining social distancing.

"City in the Grass" is an outdoor sculpture that incorporates materials like wood, metal and canvas that Drew distresses by hand. The 100-foot-long and 30-foot-wide sculpture is intended to degrade naturally over time through exposure to the weather and physical use.

The exhibit consists of painted aluminum in an undulating, wave-like pattern, three 16-foot skyscraper-like towers that each have a unique surface treatment and mosaics of wooden blocks that form a miniature cityscape around each tower.

The City of Jackson and partner organizations will launch a virtual town hall event called Connect JXN on Monday, Sept. 28, at 4 p.m. The town hall is part of a year-long effort to hear directly from residents about their vision for the city in the next two decades, a release from Mayor Chokwe Antar Lumumba's office says. The City will broadcast the meeting live on its Facebook page.

During the virtual town hall, community members will receive an overview of the project and learn more about the public engagement process. They will also be able to give input via a project survey with the goal of receiving responses from a minimum of five percent of the population from each municipal ward.

Survey responses and focus group feedback will serve as the city’s 20-25 year guiding framework for future growth and development, the release says. Key objectives of the plan include land use, zoning decisions, transportation plans, maps and policy recommendations.

The Central Mississippi Planning and Development District is leading the Connect JXN project. One Voice is leading the public engagement process in partnership with Jackson State University Mississippi Urban Research Center and the City of Jackson Planning Commission. For more information, visit connectjxn.com.

Mississippi Public Broadcasting has partnered with the Mississippi Department of Education to create a new television channel called MPB Classroom TV. The channel will begin airing Monday, Oct. 5, on weekdays from 7 a.m. to 8:30 p.m.

MPB Classroom TV will provide instructional content to pre-kindergarten through 12th-grade students. The channel will include pre-recorded 25-minute lessons from certified teachers aligned to the Mississippi College and Career Readiness Standards.

Viewers do not need internet at home to watch MPB Classroom TV, but the channel is not available on cable and satellite services. To receive and watch the channel, viewers must use an antenna on their televisions. Cable and satellite subscribers will need to purchase a low-cost antenna and change the television’s input setting. Those who only use antennas will need to rescan their televisions to pick up the new channel.