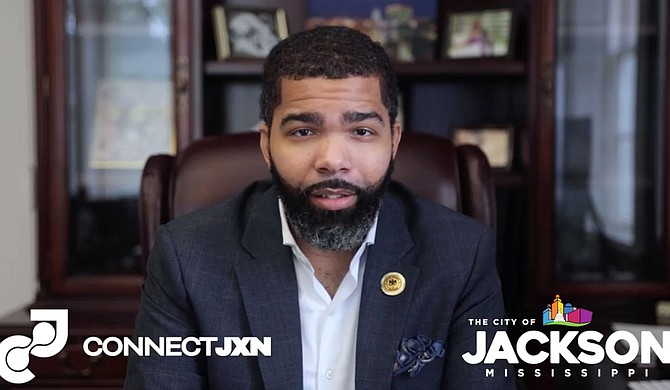 Mayor Chokwe A. Lumumba said the people need to come together to initiate the direction of the city of Jackson by contributing to a comprehensive plan. Photo courtesy City of Jackson

The people of Jackson have the opportunity to contribute to a new comprehensive plan for the city, with the public engagement phase lasting for the next three months, Mayor Chokwe A. Lumumba and Director of Planning and Development Jordan Hillman said at a press conference Monday.

Following his collective-genius mantra for his administration, Lumumba said that process will help the city develop a vision of the future.

"The last time that the city of Jackson actually engaged in a comprehensive planning process was 2001; a lot has changed since 2001," he said. "And scriptures tell us that a people without vision perish, so it is very important for us that we build and create our processes around the city based on where we would like to go."

"I have said on many occasions that we have failed in being a city that chases projects as opposed to a city which chases a collective vision," he added. "(We have to make) certain that every decision we make, every investment we make, works in conjunction with prior decisions which either has been made or a future decision that we intend to make."

Hillman said that the comprehensive plan, named Connect JXN, will be a legal document for deciding where housing and business growth should occur, the transportation system needed to support that growth, types of businesses and jobs encouraged, the basis of granting development permits, and the values the community espouses.

"The plan sets the framework for the land use pattern of the city," she said, "And what is allowed and where it is allowed, it also provides the basis for the building types, the parking, the sign standards. and the subdivision standard and all the development regulations."

"The plan is also the basis of what type of economic development priorities we pursue," she added. "So most of us don't realize that this plan is in the background until they have something happening in their neighborhood, a zoning action, or a new development moves in that they are not content with, or they want something that is not allowed by law."

The director emphasized the importance of the public's contribution to the process in the current public engagement phase. "Once it comes to making the decision based on this plan, it's too late to engage," she noted. "Now is when we build the plan, and it does not get personal until something happens in your neighborhood, then you understand the purpose of this plan."

Hillman explained that developing the comprehensive plan, which begins with community engagement, will eventually end with the city council's final approval.

"Our planning team, which is the Central Mississippi Planning and Development District in partnership with One Voice Mississippi, will draft a plan based on (the public engagement) engagement," she said. "We will present that plan to the Jackson planning commission (to) review and engage with that draft plan, and allow an opportunity for the public to continue engaging with it, and finally the planning commission will make a recommendation to the council for the council to adopt that plan."

Hillman enjoined those who want to participate in the public engagement process to fill out a survey at connectjxn.com and sign up to receive updates on the project. Other initiatives to facilitate public engagement include visits to the various neighborhood meetings and other meetings and conducting focus groups and interviews.

"Throughout the next few months, if you want more information, you can visit connectjxn.com and make contact with us, or you can contact me at the planning department," she added. "But most importantly, please engage in the survey, and your engagement in the survey will lead to us following up with you for future engagement."

State of the City Speech on Oct. 29

Lumumba announced that he will give his state of the city speech virtually at 6 p.m. Oct 29 from the Museum of Art.

The annual event allows the mayor to address community leaders on his achievements in the past year and plan for the future.

"There (are) a lot of accomplishments as well as challenges that we will like to speak to, based where we find ourselves at this particular point in time in our city's history," he said.

The mayor said that though the city has experienced development, it has not been inclusive as some parts are behind.

"We are proud of the fact that the city of Jackson had experienced three percent growth in two consecutive years," Lumumba said. "However, what we are not satisfied with is the fact that that growth had not been inclusive, it has not been throughout all sectors of our community."

He said that developing a comprehensive plan will help rectify the situation in areas that have suffered divestment.

"There are areas that we know we have to lift up a little more and so having a plan and working that plan, a plan in conjunction with the community is conducive for making certain that we realize the potential for all of Jackson and we look forward to people participating in that," he said.