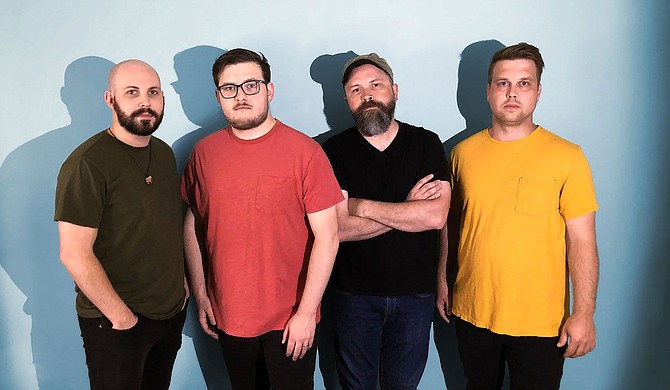 “There will never be an end to all the blood and sweat I’ll lend to make it work,” sings former Jackson Free Press music editor Micah Smith, the leader of indie-rock band Empty Atlas. Those words are in the single “Maximal,” which the band released in April in advance of its full-length album, “Kairos,” available June 12.

In this record, Smith’s lyrics ponder the balance required between being an artist and being a human with financial and social responsibilities. The song and album deal with a question many music artists struggle with: “At what point does sacrifice turn into actual joy and passion for the thing you’re creating?”

The band hopes to schedule an east-coast tour for “Kairos” once the coronavirus pandemic crisis passes.

The JFP spoke with Smith about the new single and upcoming album.

The tour has been postponed, but the album is still releasing as scheduled, correct?

We talked about whether it was weird to put out an album at this time, and we kind of struggled with it. … To me, when I get to hear new music, it gets me excited despite all this stuff, and I thought, “Even if we can be that for like 10 people, I would be really happy that we made somebody’s day a little better, somebody’s week a little better by putting out the album now as opposed to waiting.” Even though I know we’re throwing it out into a lot of junk that seems scary, it’s really an album about hope and finding joy, so I feel like now is the time that I would need it, so I hope it can be that for somebody.

Talk about any themes or ideas that "Kairos" centers around?

In December 2016, I put out the first full-length studio album from Empty Atlas, called “Hestia.” I started writing songs for that album when my wife and I first got married and were moving into a house and I was starting a new life as a husband. But I knew I wanted to make music for a living, (so) I wrote the record around balancing those two things.

“Kairos” is kind of the opposite of that. As I’ve gotten to play music more and meet more bands, a lot of people have this weird balance of going, “Well yeah, yeah, I want to enjoy my life and stuff, but right now I’m going to be focused only on making music, and I’m going to be pushing everything else to the side.” And they think that life sort of has to start later or that it can’t look like whatever they want it to look like.

[But] you don’t have to sacrifice everything to feel some kind of joy.

The Greek god Kairos was the embodiment of opportunity, and the idea behind him is that he had this golden hair. The myth is that if he ran past you and you didn’t grab him by that hair, then you’d never see him again. And I know a lot of people who treat success in their life as this thing that is fleeting and that if you don’t do everything for it right now then you’ll never have any success.

But for me, I started working with the guys I’m writing music with now, and (we’re) finding joy even if we’re playing for 10 people in Birmingham or wherever. There’s so much joy around getting to play music and being around these guys. So the record is about that idea of going, “OK, but you can find success however you want to measure it.” That to me is where a lot of the passion and joy comes back to music, is being willing to change your perspective of, “OK, if I get X number, then I am successful.”

You can be with the people in your life who make you happy and do the things that make you happy without having to make these crazy sacrifices and eventually feel joy.

Why did the band choose "Maximal" to be the single to precede the album?

“Maximal” is the opening track on the album. I think it is the clearest example of the toxic view that I and a lot of people can have, where we think, OK, but because I have this vision for where my life could go, then why am I letting anything be in the way of that? Well, let me push everything else out of the way to get to that.’ That was something that I think everybody can struggle with at some point. …

So it’s really a song about this character realizing that hey, sometimes it’s not going to go the way you think it’s gonna go, and being willing to sacrifice every relationship and every good thing in your life to reach an eventual good thing is not the way to find happiness.

How would you describe this album's sound, and how does it compare to your previous album?

For me, this is the most clear vision of what Empty Atlas is. With “Hestia,” I wrote it largely by myself and had a different group of musicians play it in the studio with me, but (for this album) I wrote every song with these guys and would bring them in with an unfinished song and say, “I’ve got a little bit of a song; let’s turn it into something great together.”

So I’ve surrounded myself with just the most talented dudes in the world. … You bring each of the musicians into the song together and let each person’s musicality be its own thing in the song. It’s made me really excited to hear these songs whenever we play together.

It feels like a very different album in different moments in the best way, to me. I wouldn’t want us to write songs that make you feel like you heard the same thing three songs ago. I wanted every song to feel like its own thing and its own story. It’s definitely darker and emotional at times.

Then we have some songs that are more fun and uplifting and brighter. And sometimes that’s even true within one song. It’ll have these shifts in tone.

We’re really excited to be able to share this album with people. These songs mean a lot to us and really speak to who we are and how we’ve grown together, so I hope we can reach people in that same way.

“Maximal” and other releases from Empty Atlas are available on Apple Music, Spotify, Amazon Music and other streaming platforms. Preorders for “Kairos” are now open and include limited edition T-shirts alongside the physical CDs. For more information, visit emptyatlas.com or find the band on Facebook, Instagram or Twitter.