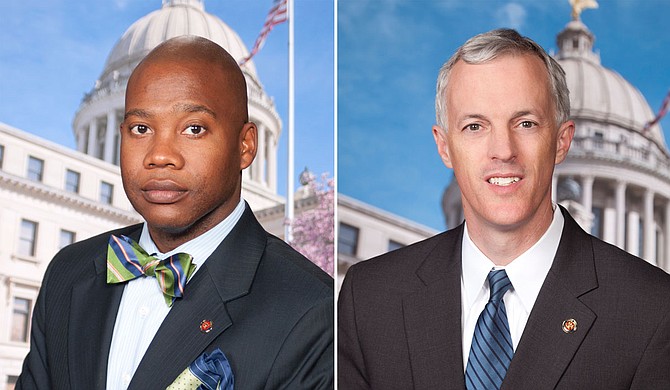 Mississippi legislators began a formal process to change the state flag today with an ambitious attempt to revive Senate Bill 2446, which would put an end to the Confederate symbolism on the official state flag.

This afternoon, Senate Minority Leader Derrick Simmons, D-Greenville, and Sen. David Blount, D-Jackson, introduced a suspension resolution to revive SB 2446, which died in the Rules Committee in early March. The resolution would require a two-thirds majority to return the bill to life, requiring a sizable, veto-proof coalition of both Democratic and Republican senators and representatives to join the effort.

In an interview with the Jackson Free Press, Simmons expressed optimism about the resolution in the current moment. “There’s a bipartisan effort in the Senate and the House to change the current flag that I’m very optimistic about. There are a lot of Republicans on the House and Senate floor in favor of changing the current flag,” Simmons said.

One of those Republicans may be Sen. Brice Wiggins, R-Pascagoula, who indicated to WLOX on June 9 that he may be ready for a flag change. “I know from where I sit and from what I’ve heard from my constituents is that this is a divisive issue, and we have too much divisiveness going on right now, and we need to represent the will of the people,” he said on the program.

Wiggins shared his thoughts on the flag after conducting a Facebook poll that overwhelmingly supported the Stennis Flag as a symbol representative of all Mississippians. Wiggins neither discounted the possibility of another referendum nor definitively committed to changing the state flag.

In an interview with the Jackson Free Press today, Blount acknowledged that the resolution needed more votes, particularly from Republicans. But, the senator said, “It’s past time to make this change. … We are going to make every effort every day we possibly can to get this done. We are for any viable alternative to replace the current flag.”

‘A Splinter In My Hand’

The move comes shortly after an interfaith coalition of religious leaders met on the steps of St. Peter’s Catholic Church in Jackson to demand the removal of the Mississippi state flag and its Confederate imagery.

“The walls of Jericho came tumbling down with a long shout,” Bishop Joseph Kopacz of the Catholic Diocese of Jackson said. “Our voices are strong to make sure the flag comes down.”

The push to replace the state flag of Mississippi comes in the midst of a national conversation about racial inequity and police brutality, spurred by the brutal death of George Floyd in Minneapolis. Just this weekend, at the largest protest in Jackson since the Mississippi Freedom Summer of 1964, organizers included as one of their key demands the removal of Confederate symbolism, including the Confederate battle saltire on the flag of Mississippi.

“For me, the Confederate flag is like a large splinter in my hand every time I see it,” Bishop Joseph Campbell of the Church of Christ (Holiness), South Central Diocese said.

Bishop Ronnie Crudup Sr. of New Horizon International Church told the press that changing the would mark a new chapter in state history. “Let the world know it is a new day in Mississippi. A day of change,” he said.

In an interview with the Jackson Free Press after the event, Crudup expressed confidence that the time had finally come for change. “I’ve never been this confident in my life,” Crudup said. “The fact that we have seen so many white Mississippians who not only were out on the street, but have been calling people of influence … I think this is the moment.”

The speakers acknowledged that the flag was symbolic, but collectively argued that the symbols chosen to represent a state or a people have real power. “We've been made unequivocally aware of significant divisions between us. We need to make sure signs and symbols do in fact represent us,” Bishop Brian Seage of the Episcopal Diocese of Mississippi said, adding that “We come together asking Governor Reeves, Lieutenant Governor Hosemann and Speaker Gunn to come together and remove a symbol that has been a source of division.”

The push for a new state flag comes nearly two decades after the last attempt, a 2001 referendum in which Mississippians voted to keep the flag that has represented Mississippi since 1894. Religious leaders present argued that the drawn-out, politicized process of a referendum was not the ideal way to seek a change to the flag, but called on leadership in the Legislature to make the decision as representatives of the people.

Gov. Tate Reeves, for his part, has repeatedly refused to answer questions about the state flag, dodging requests for his personal thoughts on the issue, saying only that he would respect “the will of the people” if a new referendum ordered the flag to change.

Simmons, however, remains hopeful that the Republican governor will come around in time. “There would be no better governor than Tate Reeves to get this done. I look forward to his leadership,” he said.