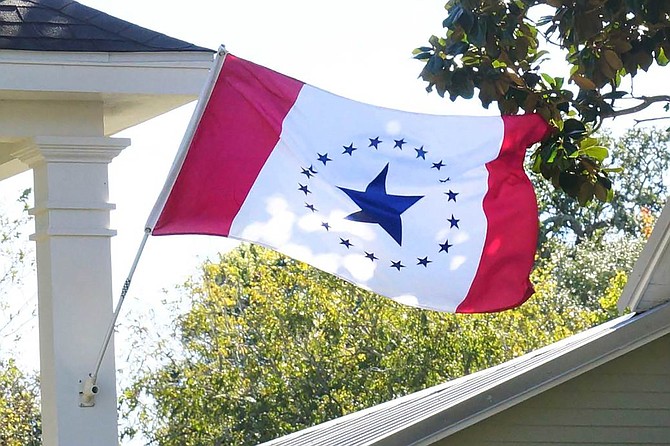 JACKSON — A new grassroots group of Mississippians is advocating for replacing the controversial Mississippi flag for urging residents to fly a different one themselves. The Stennis Flag Flyers are based in Bay St. Louis on the Gulf Coast and encourage Mississippians to begin to fly Jackson artist Laurin Stennis' flag in place of the current one to encourage lawmakers to change the state flag.

Mississippi's flag features a Confederate battle emblem in its canton corner. While debates about how to change the state flag have flared up in the past few years, no legislation or ballot initiative has become a viable option for voters to change it.

Laurin Stennis is the granddaughter of late U.S. Sen. John C. Stennis and designed the banner in 2014. The flag is on a white background with red bars on either side. In the center, 19 smaller stars encircle a larger blue star, representing Mississippi joining the union as the 20th state. The circle of stars symbolizes wholeness and is "drawn from the artifacts of indigenous peoples to our region, particularly, the Choctaw Nation," a press release from the group says.

Chris Roth came up with the idea behind the Stennis Flag Flyers because he realized that if lawmakers decide to change the state flag, picking a design could slow down the process. The group is nonpartisan, including Republicans, Democrats and independents.

"I thought ... maybe we can short-circuit this process and get a flag that would be representative of all Mississippians and have that be a flag of choice when the time came," Roth told the Jackson Free Press.

Roth, who lives in Bay St. Louis, got together a group of people on the coast and told them about his idea. The Stennis Flag Flyers were born soon afterward.

"If we can get enough citizens—not special-interest groups—flying this flag, it may motivate the Legislature to make a change, and if so motivated, this is what they will change it to," Roth said.

Roth said the group does not plan to lobby or rally to change the flag, however, leaving that to other groups and lawmakers.

"It's an alternative strategy to what's going on now, and it gives the silent majority the opportunity to speak up simply by flying a flag, and if we can accomplish that, then we've accomplished a whole lot," he said.

The group is not selling the Stennis flag or profiting from sales, but Mississippians can purchase them at A Complete Flag Source in Jackson or online.

The Stennis flag design is a popular option among Democrats who want to change the state flag in the Mississippi Legislature. Rep. Kathy Sykes, D-Jackson, has promoted the Stennis flag regularly during the legislative session with stickers and introduced legislation with Stennis' design last session. No bills to change the state flag made it out of committee in either the House or the Senate this year.

Correction: A previous version of Mr. Roth's quote that said "solid majority" should have read "silent majority." We apologize for the error. Email state reporter Arielle Dreher at [email protected]. Read more about the battle and reasons for changing the flag at jfp.ms/slavery.