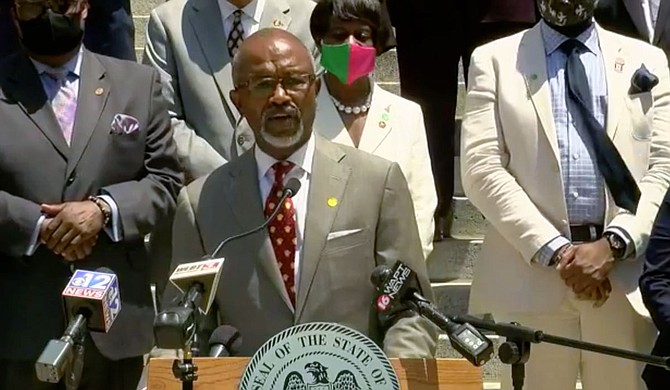 Mississippi will have its legislative showdown over a new State flag, Democratic leadership said Tuesday in a press conference outside the Capitol building, in the fading days of the coronavirus-extended 2020 session. “Before we leave here, we’ll be in a position to take a vote on the flag, up or down on some measure that will be able to get rid of the flag,” House Democratic Leader Rep. Robert Johnson, D-Natchez, stated.

“We need a flag that unites us, not divides us,” Senate Minority Leader Derrick Simmons, D-Greenville, said at the same press conference. “We need a flag that is about healing and reconciliation, and not about hate. Now is the time to act “to remove and replace that Confederate flag.”

The pressure on the Mississippi Legislature to change the state flag continues to mount today, with a coalition of legislators, business associations, sporting institutions and religious congregations speaking out against the Confederate iconography on the Mississippi State Flag.

Today, Lt. Gov. Delbert Hosemann, Philip Gunn and an enormous swath of business leaders, represented by the Mississippi Economic Council, publicly joined calls for an immediate change to the state flag without a referendum.

“The Legislature in 1894 selected the current flag and the Legislature should address it today. Failing to do so only harms us and postpones the inevitable,” Hosemann said in a statement released early today.

Baptists on Board for a New Flag 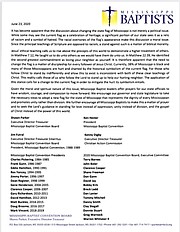 The Mississippi Baptist Convention held a press conference yesterday in which its executive committee unanimously called for a new state flag that no Mississippians see as “a relic of racism.”

Jim Futral, former executive director-treasurer of the MBC board, said the responsibility lies with the Legislature. “We're not asking you to rewrite history,” he said. “That is an impossibility. But we can impact the future. And we can write a script for the future. And the Legislature can find a way to help us write a new day.”

On June 12, the Mississippi Economic Council came out against the current state flag, releasing a statement saying that “the current flag is harmful to Mississippi's image and reputation for those outside our state and is hurtful to many fellow Mississippians. MEC encourages state leaders to take action to change the flag.”

In 2016, MEC unveiled a Mississippi Bicentennial flag that some are now talking about now as either a temporary or permanent choice should the Legislature vote to bring the current flag down. It has the state seal in the middle, which contains the words “In God We Trust.”

Today, both Hosemann and Attorney General Lynn Fitch mentioned those words in statements in apparent support of changing the state flag. “The addition of the motto ‘In God We Trust’ from our State seal is the perfect way to demonstrate who we are to all,” Fitch tweeted.

Hosemann also endorsed “In God We Trust” in his tweeted statement: “In my mind the flag should bear the Seal of the Great State of Mississippi and state ‘In God We Trust.' I am open to bringing all citizens together to determine a banner for our future.”

Old Flag Not An Option

The road is not an easy one for advocates of a legislative change to the flag. Here, deep into an extended session, a new bill to force legislative action would require a suspension of the rules and thus a supportive vote from two-thirds of the entire chamber, a move that would require significant support from Republicans.

Over recent weeks, multiple Republicans in both houses have publicly supported a change to the state flag, including Sen. J. Walter Michel, vice chairman of the Rules Committee, a powerful Senate Committee that would, under typical circumstances, receive a bill calling for a change to the State flag.

Previously, Lt. Gov. Delbert Hosemann sent the original resolution, which would have replaced the current state flag with the Hospitality Flag, popularly known as the “Stennis Flag,” to the Constitution Committee, where it had no chance of escape. Now, with the changing tides turning against the 1894 flag, Hosemann’s public support for the change means a chance for a resolution to face the Senate floor.

Another initiative is in the works, however, which Sen. Hillman Frazier, D-Jackson, is championing. Frazier supports the Legislature determining the future of Mississippi’s flag, but stressed that even in the case of a referendum, Confederate imagery was an intolerable choice. “That old flag should not be on the ballot as an option,” Frazier said.

In the House, Rep. Jeramey Anderson, D-Moss Point, and Rep. Sonya Williams-Barnes, D-Gulfport, introduced their own resolution today to suspend Legislative rules and order a new state flag. “It is past time for the Legislature to step up, do its job and remove a flag that is so divisive to so many Mississippians and replace it with a flag that we can unite under,” Anderson said in a statement.

“The change of the state flag is long overdue, it is time for Mississippi to make a change and this change should be done by the Legislature,” Williams-Barnes added.

Crystal Welch, professor and supervising attorney at the Mississippi College School of Law, shares the confidence that has been growing in the state since the historic Black Lives Matter protests swept the nation—and Mississippi with it. “No one fighting this fight thinks we won't win. The participants are optimistic,” Welch said.

Welch prefers the flag designed by Rocky Vaughn, which includes the Magnolia, Mississippi’s state flower. She is opposed to the “Stennis flag” because it inverts the Confederate-era Bonnie Blue flag.

But Welch is open to other ideas. “Any flag that doesn't include Confederate iconography,” is better, Welch explained.