‘Today I Feel Like a Mississippian’: State Flag Consigned to History in Bipartisan Vote 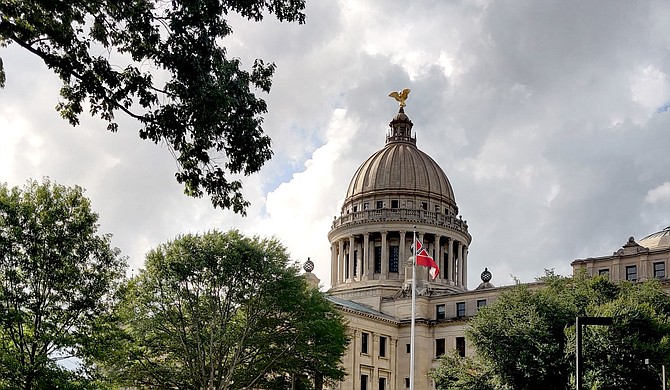 Mississippi will have a new state flag without Confederate symbolism after a legislative supermajority voted to retire the 1894 design. The old state flag flew for the last time above the Capitol on Sunday, now consigned to history with the Confederacy it once honored. Photo by Nick Judin

The contentious Mississippi state flag is officially no more today, consigned to history after a legislative supermajority voted Sunday to retire it for good. House Bill 1796, passed with a larger, veto-proof vote share than the suspension that allowed it, now awaits Gov. Tate Reeves’ signature, a formality the governor acknowledged Saturday that he will provide.

Contention over Mississippi’s flag, with its Confederate canton, stretches far back into history, but the most recent push began at the Black Lives Matter protests on June 8, the largest anti-racism protest in the state since the Mississippi Freedom Summer of 1964. Thousands of Mississippians gathered in the capital city to call for an end to the structures and symbols of racism with Mississippi’s Confederate flag chief among them.

Pictures from the Mississippi State Capitol's Saturday deliberations over the state flag on June 27.

A struggle that had not yielded the desired result for decades coalesced in a matter of weeks. Support for a new state flag flooded in from across the state and the nation. After Mississippi State football player Kylin Hill tweeted on June 20 that he would not play as long as the state flag flew, both the SEC and the NCAA athletic associations threatened a moratorium on championships played in the Magnolia State as long as the Confederate saltire flew over the Capitol.

The Mississippi Economic Council and large swaths of the state’s industries joined forces to challenge the current state flag, arguing that its imagery was inherently offensive to much of the nation, especially Black Americans descended from the enslaved peoples the Confederacy fought to keep in bondage. Religious institutions, too, from the Mississippi Baptist Convention to the Catholic Diocese of Jackson, joined the swelling call for change.

The movement succeeded over the weekend as the newly formed coalition faced the challenges of introducing legislation this late in the session, which the COVID-19 pandemic had already derailed. In order to bring up House Bill 1796 for consideration, the Legislature needed to first suspend the rules, a move that required a two-thirds majority in both chambers, as well as support from key figures in the House and Senate Rules Committees, with Republicans chairing both.

‘No Longer A Relic’

Shortly before the deliberations, three of the young Black Lives Matter Mississippi activists who organized the historic protests earlier in June—Taylor Turnage, Calvert White and Timothy Young—stood outside the Senate gallery, anxiously awaiting the first legislative culmination of their activism.

Young, along with the rest of the trio, understood the significance of the moment. "Protests and organizing communities is imperative, but making sure there is lasting physical change ... that's legislation—being here and having numbers here,” he told the Jackson Free Press in an interview. Young is a Jackson State University alumnus.

Black legislators agreed while waiting for the initial vote.

“No longer shall we be a relic of the past,” agreed his colleague Rep. Cheikh Taylor, D-Starkville.

“Mississippi’s emblems didn’t represent me,” Karriem admitted. “I didn’t feel loved. But today I feel like a Mississippian.”

House Concurrent Resolution 79, the rules suspension necessary to consider the flag bill, first passed the House 85-34, after a brief but spirited debate and several failed attempts to convert the bill into a referendum on the matter.

Speaker pro tempore Jason White, R-West, introduced House Concurrent Resolution 79 with an impassioned speech in favor of change. “Whether we like it or not, the Confederate emblem on our state flag is viewed by many to be a symbol of hate. There’s no getting around that fact,” White said.

The Republican leader then quoted Abraham Lincoln: “We cannot escape history,” he said, looking out across the House chamber. “We will be remembered in spite of ourselves.”

"Love thy God and love thy neighbor," House Speaker Philip Gunn said after the vote, calling the decision to remove the state flag an example of biblical love and the right move for Mississippi, indicating that the action followed confirmation from Lt. Gov. Delbert Hosemann that the Senate had the bipartisan supermajority needed to confirm the resolution.

Conscience Asks the Question, 'Is It Right?’

For a brief time after the vote in the House, sources varied on the likelihood of immediate action in the Senate. While the immediate release of the resolution allowed for same-day action, Sen. Chris McDaniel, R-Ellisville, led a group of roughly 20 legislative holdouts, presenting the greatest threat to the change in the entire process.

McDaniel argued that the people of Mississippi should decide the flag issue through direct democracy, though in an interview with the Jackson Free Press he cautioned against the idea of putting the measure on the ballot in 2020. He cited campaign-finance loopholes that a referendum would provide and the threat of COVID-19. McDaniel’s design was to plan a referendum for 2021.

But it would not come to pass. The Senate Rules Committee swiftly passed the resolution the same day it came to them, and it passed to the Senate floor, the air thick with uncertainty over the razor-thin margins upon which Mississippi’s old flag would live or die. "You can't freeze frame a moment in history ... and judge it for that mistake," McDaniels pleaded, warning of a “terrible, slippery slope” down which he said opponents of Confederate imagery led the nation.

Hosemann made the final call, delivered over the total stillness of a state waiting with bated breath. The vote was 35-14, the exact margin needed to allow for a rules suspension and overcome a gubernatorial veto. The chamber erupted in cheers, senators crossing the aisle to embrace their colleagues, the eyes of the nation on them. Victory was ordained.

The following day, an even greater legislative margin passed HB 1796, with no meaningful attempts to delay or derail the change.

The day of the rules suspension, with much of Mississippi celebrating around her, Rep. Hester Jackson-McCray, D-Horn Lake, sat on a bench outside the Capitol, smiling as the crowds milled out of the building. It was another momentous day in her first year in office.

For Jackson-McCray, who endured a challenge to the legitimacy of her election merely to take office, an end to the 1894 flag was only "half a victory." Now, she said, "It's time for us to get a flag that we're proud of. A flag for our grandchildren and their children, too."