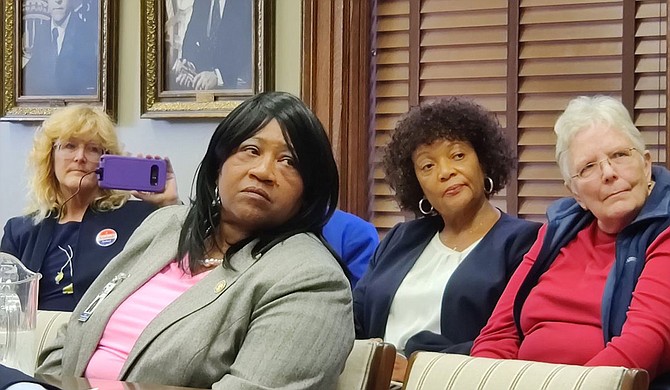 Rep. Hester Jackson-McCray will likely retain her House seat after a contentious committee hearing and the testimony of two DeSoto County officials. Photo by Nick Judin

A black Democrat is likely to keep her seat in the Mississippi House of Representatives after a long and contentious committee meeting Monday at the State Capitol. Rep. Hester Jackson-McCray, D-Horn Lake, defeated the Republican incumbent, Ashley Henley, by 14 votes in the November election. After almost four hours of testimony and deliberations, the committee voted 5-0 to seat Jackson-McCray, a recommendation that now returns to the House floor, where a formal vote will permanently settle the matter.

While the committee's decision is not binding on the full House, chairman Rep. Rob Roberson, R-Starkville, told the Jackson Free Press he is confident the House will accept the recommendation.

In contesting the vote, Henley, alleged improper procedure on the part of DeSoto County election officials, as well as voter fraud. Henley chose to press her case with the Republican-controlled House of Representatives, rather than local courts where other contested elections went for review. The House will make the final judgment on District 40's election, either certifying the results, calling for new elections or seating Henley outright.

The key testimony in the special committee's proceedings came from the DeSoto County officials in question, Circuit Clerk Dale K. Thompson and Election Commissioner Danny Klein. Both officials, themselves Republicans, unequivocally stated that the election of Jackson-McCray was fair and unblemished by fraud.

"I assure you that if there were any unfair circumstances we would not have certified this election," Klein said. Henley's reports of irregularities primarily related to sign-ins on electronic voter rolls, which are not the means of determining the winner of the election. Klein insisted that the physical signatures in the voter receipt book matched the ballots cast on Election Day.

Sam Begley, a Jackson attorney who served as Jackson-McCray's counsel during the deliberations, pointed to Klein's sworn testimony as definitive proof that the election results should stand. Henley represented herself during the hearings.

While the minutiae of electoral process determined the committee's final decision, the path from Jackson-McCray's narrow win in November to her unanimous victory last night was highly contentious and, at times, strikingly personal. Before the discussion of the electoral issues began, Begley attempted to have Henley's petition thrown out based on improper filing procedures, including the question of whether or not Henley properly delivered the petition to Jackson-McCray directly.

Henley acknowledged difficulty in finding Jackson-McCray in order to personally serve the victorious representative with the petition challenging the election's results. Henley described visiting Jackson-McCray's house, seeing the porch lights off and admitted that her husband "would not allow" her to visit Jackson-McCray alone. Henley expressed a particular enmity for Commissioner Klein, asserting that he told her that under no circumstances would he vacate the results of the election.

The committee of four Republicans and one Democrat rejected Begley's procedural objections to Henley's petition, but after the testimony of Thompson and Klein, the closed session deciding the committee's findings took only minutes. Roberson declined to comment at length on the decision, because the House must still officially determine the petition's fate.

Jackson-McCray smiled on her way out of the Capitol. It was night outside when the committee finally adjourned, but the uncertainty that loomed over her new position had vanished. "I'm looking forward to getting to work for the people," she told the Jackson Free Press. "Which is why they sent me here."

Email state reporter Nick Judin at [email protected] and follow him on Twitter at @nickjudin. State intern Julian Mills contributed to this report.