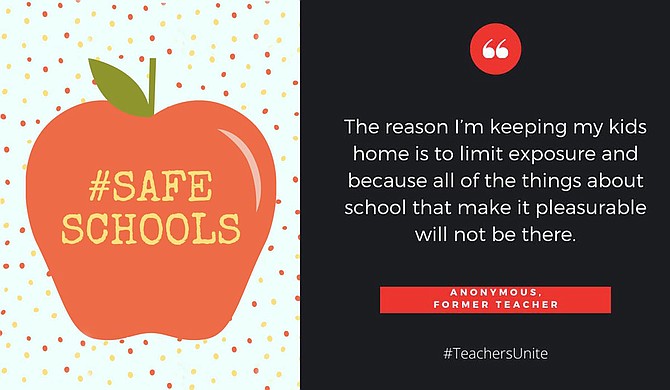 With the fall academic season right around the corner, many Mississippians are worried about making the right choices for their children as they try to adapt and incorporate safe measures amid COVID-19.

Jackson County native and JSU Alumni Donald Turner, 32, has two sons of his own and has put his compassion and concern into action since moving back to Mississippi from Texas this summer.

“This came about for me because a friend of mine is a teacher, and they were going back to a district that wasn’t offering distance learning,” he says, further explaining that he and other concerned citizens need to speak up for teachers who are bound by teaching contracts.

Without better options for teachers and parents across the board in Mississippi, Donald and his wife Keshia would rather homeschool their children before allowing them to go back to school during these life-threatening conditions.

He, along with other families and allies, will be joining together at the Mississippi State Capitol (400 High St.) for the “Mississippi Teachers Unite Rally” on Friday, July 17, which will begin at 11 a.m. The rally is a grassroots effort made up of a coalition of teachers, parents, school staff, community members and students who are concerned about reopening public schools.

As opposed to being run by any official organization or entity, “it’s really just a group of people who give a damn,” Turner says. “We just want campuses to remain closed until they are safe to return.”

One of the safety guidelines recommended by the Center for Disease Control and the World Health Organization is for campuses to remain closed unless they are in a county that’s gone 14 consecutive days with no new case of COVID-19.

Turner says that he is not suggesting students do not begin the new academic year; rather, he and others believe that districts should engage in similar remote learning and distance learning procedures as they did when the outbreak first hit Mississippi in March when case numbers were lower than they presently are.

“To be clear, this isn’t just a teacher issue; it's a community issue. I think (COVID-19) is one of those things that expose the gaps in terms of how we as a country, as a society takes care of each other,” he says. “Because it is a systemic problem, it shouldn't be left up to parents and teachers to figure it out. This is why we have legislators who have to take a stand to do what’s best for Mississippians, as opposed to just following federal instructions from a Secretary of Education who wouldn’t be qualified to teach in a Mississippi classroom.”

Instead of reverting to how education had been conducted in Mississippi before the pandemic, Turner says the supporters of distance learning should take what has been learned from COVID-19 and be willing to support and fund other viable options for learning, as well as stir awareness for Mississippi-based education programs that have already laid a foundation before the pandemic began.

“We have to move forward, and we have to engage in forward-thinking solutions. Why not do something different? Why not change the model?” Turner says. “When you’re talking about schools, you’re talking about a population that’s mostly women and children. In literally any other context, in literally any other scenario, these are the people that you would protect first. Why are we fighting this? You cannot prioritize profit over people.”