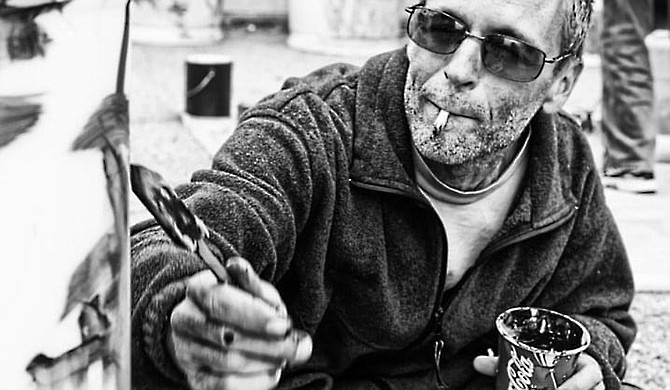 Sorensen was born and grew up in Fondren and attended St. Joseph Bruins High School before going on to the University of Southern Mississippi, where he majored in English.

In 2006, Sorensen's wife of 11 years divorced him, and he decided to give her their three-bedroom house in Fondren and everything else except his motorcycle. He also lost his job as a security guard at Mississippi Baptist Medical Center not long afterward. He spent some time living in a tent in the backyard of his friend Hunter McGee in Fondren, but when Mcgee later moved, Sorensen relocated to a spot in the woods near the G.V. (Sonny) Montgomery VA Medical Center in Jackson that he came to refer to as "The Swamp."

"Scott had set up his own compound out there where he decided to live off the grid his own way and built everything himself," Ron Chane, owner of Studio Chane in Fondren and a longtime friend of Sorensen, told the Jackson Free Press. "He set up an elevated tent, he built his own solar-powered heated shower out of wood, campaign signs, piping and concrete and brought in water for it, he built a leg lift for exercise, he made a bicycle RV he used to deliver his art and he even built his own cooler out of insulation and wood. His compound was a place he made with his own hands to get away from everything and do his art."

Chane says he first met Sorensen in 1988 on his first day at Hinds Community College, where Sorensen was also attending at the time. The two met again during the 2000s and later became reacquainted around 2011, when Sorensen had taken up art, painting and drawing portraits with colored pencils and acrylics and selling his works out of a backpack at places such as Cups and Sneaky Beans in Fondren.

"At first when he started making art while going through that rough patch in his life, he seemed to be doing it as a way of passing time," Chane says. "However, he got truly into it and there was serious talent there. As an artist myself I found him intriguing and he became a close personal friend. Over the past several years he helped me with art projects at home, helped me build a deck, shoveled rocks for another art project and was just generally a positive influence on me." 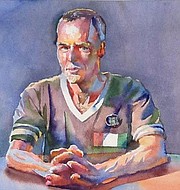 Sorensen sourced materials for his projects from local stores in Jackson and used found materials as well, such as metal pipes left over from helping Chane build his deck, which Sorensen used to make geometric dome-shaped art installations. He also liked making smaller geometric pieces out of popsicle sticks and other materials, Chane says. Sorensen painted a wall mural on Fondren Corner and created thousands of individual pieces, many of which went on display at places such as the Arts Center of Mississippi and Gravity Gallery Coffeehouse & Cafe in Clinton.

During the last months of his life, Sorensen was living in an apartment in Belhaven Heights with a friend named Heidi Hoffer, and was paying all of the utilities with money from selling his art.

"Scores of people reached out to Scott before he set up his compound and had invited him in, but he was determined to live on his own and that was what he wanted to do," Chane says.

Chane is working together with the Fondren Renaissance Foundation to set up six commemorative plaques in honor of Sorensen at places he frequented, such as a bench in front of Cups in Fondren, at Sneaky Beans and at the site of his Fondren mural.