Fondren After 5 Reboot, Health-Care Facility and Restaurant Ready to Launch 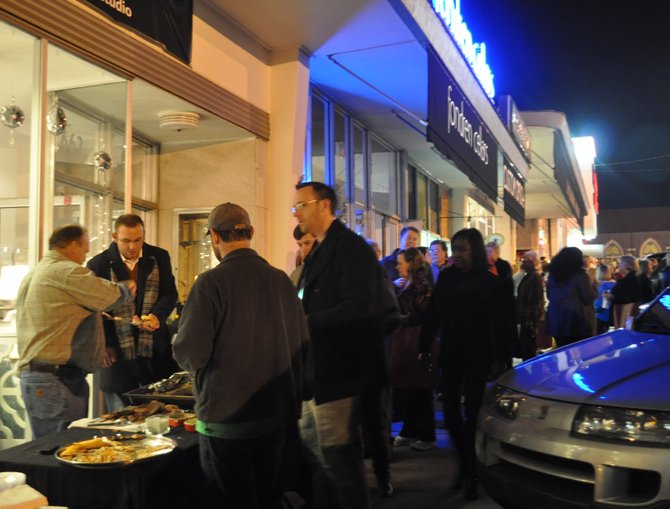 Fondren After 5 gets some new attention and relaunch. Photo by Trip Burns.

Fondren After 5 Gets a Re-launch

Each month, the Fondren Association hosts Fondren After 5, an event in which local Fondren artists and merchants gather to open up for an additional night of commerce and creativity. Ron Chane, an unofficial organizer for the event since mid-December last year, recently decided it was time to kick the event up a notch.

"My store, Swell-O-Phonic, is going to be at the head of an effort to re-launch Fondren After 5, since it was getting a little slow and weak," Chane said. "Starting February 6, we'll be trying to create a mega-platform of traffic for artists, designers and musicians, dreamers and doers, for an event at Fondren Corner."

In addition to Swell-O-Phonic, an indie cultural store that sells exclusive kicks, t-shirts, skateboards and other items, Chane is also the owner of t-shirt printing studio Studio Chane Screen Printers and two boutiques—Soma Wilai Boutique for women and Slave Bird for men.

The Fondren After 5 re-launch at Fondren Corner will feature at least 27 vendors. The Cheshire Abbey and CARA animal shelters will both be present, and Rooster's will roast hotdogs on the sidewalk. Swell-O-Phonic will position six to eight musical acts around the area. Cups, Sneaky Beans, Que Sera Sera and Fondren Guitars will all bring their own bands in as well. Chane expects at least 10 musical acts at once going on throughout the night.

Rainbow Co-op is opening its lobby for artists and vendors, and starting next month, Rainbow will open High Noon Cafe at night for future Fondren after 5 events.

For the kids, St. Luke's church on Duling Avenue will have a bouncy castle set up, kids will be able to play on a Fondren Fire Department firetruck, and Magical Creations will put on a mini carnival featuring face painting and balloon art.

FIGMENT, an art project hosted by Catherine Lee and Midtown Partners, will have a booth at Fondren Corner. SkateMS, Midtown Bike Shop, the Magnolia Roller Vixens and Hard Places will also participate.

JPD will be out on horseback throughout the neighborhood during the event.

"About 60 percent of merchants in the Fondren area plan on opening for the event," Chane said. "It's pretty great for a February. We're trying to incorporate a lot of midtown artists for this. And in the future, we're going to have Ardenland offering free concerts every Fondren After 5 starting in March."

Jackson City Council members engaged in a round of congratulatory verbal back-slapping Monday night as they welcomed a new health-care facility to the city.

The council unanimously approved a tax incentive for Urology Healthcare Properties LLC, the only item on last night's special-meeting agenda. The incentive exempts the company from paying property taxes for up to five years on a 46,000-square-foot, three-story building planned to be built near the intersection of Fortification and North State Streets. Baptist Hospital will lease the third floor, and the company expects doctors and other health-care companies to begin occupying the space in July 2015.

When it comes to economic development, "we're becoming the A team for the city," said Council President Charles Tillman, of Ward 5.

"We have international companies that could go anywhere," he said. "They want to stay in Jackson."

Councilwoman Margaret Barrett-Simon of Ward 7, where the building will be located, echoed the sentiments of her fellow council members. "This project was sought by other cities, and Jackson won," she said.

Duane O'Neill, president and CEO of the Greater Jackson Chamber Partnership, said the project falls under the state's 2012 Health Care Industry Zone Act, which Gov. Phil Bryant and the state Legislature enacted to promote the business of health care in Mississippi. Jackson will see a number of such projects in the future, he said. He expects the city to benefit financially in the long run, even with the short-term incentive in place.

"On behalf of the council, we're sold," Tillman said to Joe House, who represented Urology Healthcare Properties at the meeting.

Ward 6 Councilman Tony Yarber said that locating the new building in Jackson is a smart move. "It shows that the heartbeat of this metro area is this city," he said.

The Turnrow Set to Open in February

DeWitt DeWeese, former owner of The Dock on the reservoir, is preparing to return to the restaurant scene. After being away from the business for 10 years following the end of The Dock's 25-year run in 2004, DeWeese, 51, is looking forward to opening The Turnrow later this month.

Chris Crowson, a friend of DeWeese, is his partner in operating The Turnrow. Crowson owns the building the new restaurant will occupy, which used to be a Bear Creek Feed and Seed warehouse next door to Crowson and his wife Paulie's business, Bear Creek Wine and Spirits.

The Turnrow will primarily be a burger joint that will also offer steak and seafood specials at night, daily chalkboard items and crawfish and shrimp when in season. The restaurant will feature live music Thursday through Sunday, plate lunches Sunday through Friday, a special Sunday lunch and a 5,000-square foot outdoor deck.

The Turnrow is located at 134 Weisenberger Road in Madison. For information, call 601-506-8719 or visit the restaurant's Facebook page.