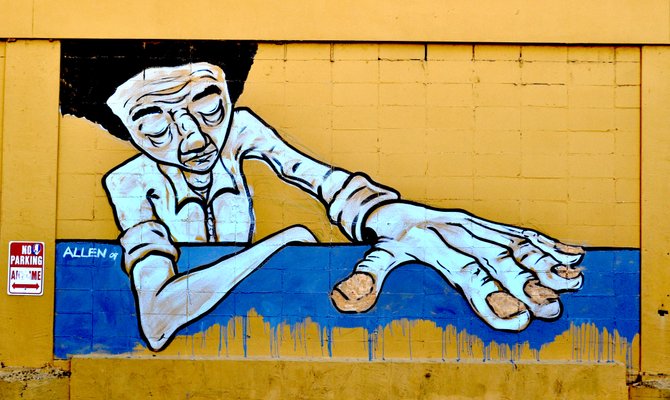 The murals by Scott Allen and others (see below) outside Sneaky Beans are as much a part of its gallery experience as what is inside. Photo by Trip Burns.

The pulse of any good neighborhood comes from the people who inhabit it. More than a collection of buildings and storefronts, it’s the folks inside and the passersby that give a place its energy. And in Fondren, uniquely, the buildings themselves are extensions of the people. The small businesses, shops and venues have real characters of their own, and it’s not by accident. Like with the murals on the walls around and behind Sneaky Beans, the entrepreneurs, artists and residents of the city created the environment in Fondren.

Byron Knight, who opened Sneaky Beans as a coffee shop, gallery and music venue in 2008, welcomes the public art that graces the property. “It definitely wasn’t as festive” before the murals were painted in 2009, he says. “(Now,) probably five times a day people will walk down there to take pictures in front of all that stuff. Even wedding pictures. They’ll have the whole bridal party down there.”

“Fondren’s not your typical neighborhood,” says Chane, a local business owner (of Swell-O-Phonic and his Studio Chane screen-printing empire), artist and proponent of an ongoing effort to see more art on the walls and buildings of Fondren. Elsewhere, he says, those murals “would freak people out, they’d call it graffiti. But it’s just another way we show how we exist; doing our art.”

A few years back, Chane organized an effort to increase the presence of public art in Fondren. He calls the larger project, still unfinished, the “Twelve Wall of Fondren,” and the murals at Sneaky Beans were some of the first to be painted as part of the effort. Work by Scott Allen, Justin Schultz, Scott Sorensen and many others fill the Sneaky Beans lower parking lot. When Chane moved his store to its current location in Fondren Corner, he brought artwork from the old Swell-O-Venue skate park and relocated it to the outdoor gallery at Sneaky Beans. All that is in addition to the other murals around Fondren, and there’s consistent talk of more to come as artists see possibilities in the blank spaces on the walls.

“Artists see an open canvas anywhere,” Chane says. “Jackson has got such a smart creative scene; photographers, plenty of artists, and musicians. There just needs to be more opportunity out there. Our art isn’t on walls, it’s on t-shirts, but we’re influenced by seeing art on walls.”

“A lot of local artists would love to have a wall, they just haven’t had the opportunity yet,” he adds. “And that’s the main reason that I want to pick the reigns back up and go back into (the project). I’m not going to make anything off of it; it’s not even going to be on my property. It’s not going to make me a dollar more or less, but it is my neighborhood, and I think that’s the sentiment of everybody who owns a shop here.”

“I remember always thinking it was the coolest place in Jackson,” Knight says of the neighborhood. And like many of the small business owners around him, his purpose in operating Sneaky Beans is to inject more energy into Fondren.

“I was one of the first parts of any nightlife in Fondren, and that was one of my main goals, to have something to do after five,” Knight says. “I come here every day so I don’t get to see it from the eyes of others, but I definitely think I added a little bit.”

Ultimately, that’s what the art at Sneaky Beans, and moreover, what the neighborhood itself, is about; individuals bringing a bit of themselves and their passions into the mix.

Chane acknowledges the importance of support from businesses and building owners to the project, and he says that almost without exception, all parties are enthusiastic about improving the neighborhood through creativity and art.

“It’s my vision that I’m going to carry out,” Chane says. “There’s still plenty of mural space out there. We’re not trying to collect opposition; we’re trying to create art.”

Expect to see even more painted urban canvases dot the landscape of Fondren. In the meantime, next time you visit Sneaky Beans, walk down and take a look at the art. Take a picture.