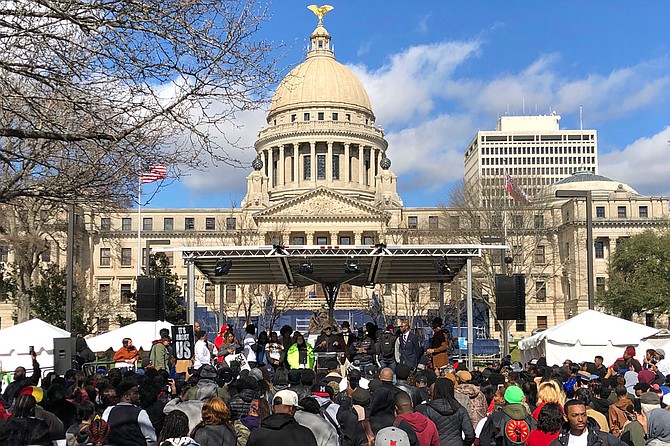 Hundreds of activists and affected families convened outside the Mississippi Capitol in downtown Jackson on Jan. 24 to protest inhumane conditions inside the state's prison system. Photo by Seyma Bayram

Families mourned the death of their loved ones while in Mississippi Department of Corrections custody and shared their fears for those who are still alive and enduring squalid conditions in a protest outside the State Capitol in downtown Jackson Friday. Hundreds of affected families joined formerly incarcerated people and activists from throughout Mississippi and beyond to protest inhumane conditions inside Mississippi prisons and jails.

Formerly incarcerated men and women spoke of unsafe drinking water and food in MDOC facilities and rat infestations, and mothers showed pictures of their sick and malnourished sons, who are denied medical attention or not given enough to eat.

"Our brothers are being humiliated, violated, eliminated and exterminated," spoken-word artist and activist Mysonne Linen told the crowd between group chants of "No justice, no peace!" and "Shut it down!"

At least 11 people have died while in MDOC custody since Dec. 29, 2019. One of those deaths occurred over the weekend. Joshua Norman, 26, was found dead from an apparent suicide by hanging in his cell in unit 29 of Mississippi State Penitentiary at Parchman. Coroner Heather Burton maintains there is no evidence of foul play.

Team ROC—the philanthropic arm of rappers Jay-Z and Yo Gotti's ROC Nation entertainment label—organized the Jan. 24 Mississippi Prison Reform Rally in collaboration with local and national criminal-justice reform organizations including the Mississippi Prison Reform Coalition, Color of Change, Until Freedom and the Reform Alliance. The protest drew hundreds of people from Jackson and throughout Mississippi and states including Tennessee, Louisiana and New York. Its message spread through the hashtag #MSPrisonReformNow on social-media channels.

Sharon Brown, a lead organizer with the Mississippi Prison Reform Coalition, honored the men who risked their lives to inform their families and the public about conditions inside of MDOC prisons. "I want to thank those brothers, first of all, behind the walls that had the courage to let the world know of the injustices, to let the world know that they are beaten, broken, tired," she said.

The protest came one day after Gov. Tate Reeves held a press conference to discuss how his administration would "restore order" to Mississippi's prisons. Implementing tighter protocols to prevent contraband cell phones from entering prisons was among his promises. "They're being used to coordinate gang activity throughout the Mississippi system and even throughout the country," Reeves said about the cellphones on Jan. 23, adding "that was (a) large part of what caused the recent series of killings to escalate as much as it did."

At the protest, families and advocates rejected the narrative of cell phones facilitating gang violence and emphasized the importance of the devices in exposing the poor conditions inside MDOC as the agency remained silent. They also pointed to the likelihood of sorely underpaid MDOC guards smuggling in cell phones to make extra money by selling them to the incarcerated.

News of prisoner deaths and dangerous conditions inside MDOC facilities first began to circulate on social media, as well as into messages to media such as this newspaper. Inmates used contraband phones to disseminate photographs and videos on Twitter, Facebook and Instagram.

MDOC did not issue a public announcement until Jan. 2, when it notified the public of a lockdown in all its facilities due to "disturbances" there. On Jan. 3, MDOC confirmed that five people had died and that others were injured at the Chickasaw County Regional Correctional Facility in Houston, the South Mississippi Correctional Institution in Leakesville and the Mississippi State Penitentiary at Parchman.

Advocates and families have pointed to a combination of overcrowding, understaffing, poor conditions, desperation and gang violence as drivers of the violence. But they rejected accusations that incarcerated men and women were simply violent gang members. Those who did join gangs, they said, did so for protection inside the dangerous prisons where some guards also have gang affiliation.

MDOC continues to struggle with severe staff shortages to oversee its population of more than 19,000 prisoners. In 2018, MDOC had more than 500 vacancies. During last year's legislative session, the Mississippi Legislature rejected former MDOC Commissioner Pelicia Hall's request for a $7-million increase to raise employee pay for approximately 2,000 employees and recruit more staff.

Mississippi currently has the third highest incarceration in the country, but advocates say the state could climb to number 2 and surpass Oklahoma, because of that state's recent criminal-justice reforms that led to a drastic decline in its incarcerated population. On Nov. 1, Oklahoma introduced a new law that would reduce simple drug-possession charges to a misdemeanor. The law is an extension of a 2016 law that had reclassified simple drug possession to a misdemeanor, but the Nov. 1 bill makes this law retroactive and renders more Oklahomans eligible for release.

Families also called for sensible reforms such as eliminating Mississippi's harsh habitual sentencing laws, which disproportionately target black people and those struggling with drug addiction, which could also help overcrowding in the state's prisons. Changes in how Mississippi defines violent crimes—currently, an unarmed house or garage burglary when no one else is present constitutes a violence offense—could also reduce extreme sentencing and lead to a lower prison population.