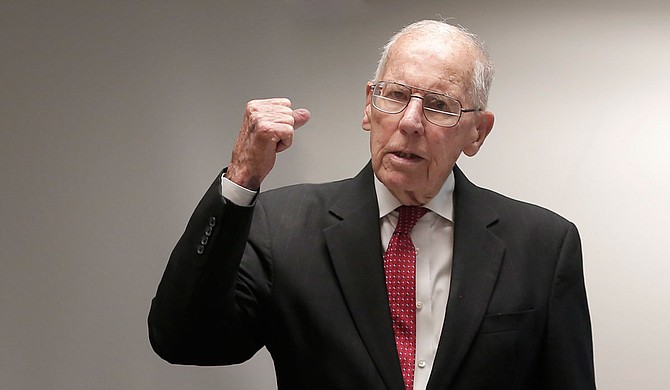 Members of the Jackson City Council recognized former Mississippi Gov. William Winter for his legacy. He died at age 97 on Dec. 18. Photo by Imani Khayyam

In its last meeting for 2020, members of the Jackson City Council joined numerous others on Tuesday to recognize the contribution of former Mississippi Gov. William Winter, who died Dec. 18 at age 97. He was governor from 1980 to 1984, serving when the position was still limited to four years.

Ward 7 Councilwoman Virgi Lindsay said the Grenada, Miss., native was a resident of her ward, a "longtime Jacksonian," and that his two main contributions were racial reconciliation and the Education Reform Act of 1982, "which instituted public kindergartens; and it was huge."

"He did so much to improve the lives of all Mississippians through those two: intense and passionate focus on public education and racial reconciliation," she said. "And I send my heartfelt condolences to his family and all the people who loved him."

Ward 4 Councilman and District 66 Rep. De'Keither Stamps described Winter as a "true statesman" whose death was a loss and said the people will miss him because of his service.

"His contribution to us was just measurable," he said. "But his legacy will carry on (as) we always put the needs of Mississippi first above other lower levels of allegiance. If we can get back to a state of our politics where we put our folks first, our mission first, we might not be like that, but we will definitely do the same thing."

Ward 5 Councilman Charles H. Tillman said he admired Winter not only for being a champion of education but someone who emphasized togetherness.

"He was really an open-minded person as far as humanity," he said. "He really had a strong feeling that if we all work together, Mississippi would move forward as a team of people together; not separate, equal and all that, but together, period."

Chief Administrative Officer Robert Blaine raised the alarm that the rising COVID-19 infection rate is now affecting the whole city, which is a dramatic change from a few weeks ago when Mayor Chokwe A. Lumumba said only some parts of the city have rapidly increasing infection numbers.

"We have moved from localized hotspots to community spread," Blaine told the city council Tuesday. "We have seen infections rising across the entire city, and our hotspots are no longer restricted to certain localities; It is spread throughout the entire community."

The city council on Tuesday approved support for a capital-city agenda for the 2021 Mississippi legislative session. They include having restrictions on police chases into the city from another jurisdiction, re-submitting water-bill legislation, approval for a land bank to deal with blight, funding for projects marking the 200th year of Jackson in 2021, and support for Pete Brown Golf Facility and Golf Park Municipal Golf Courses, as well as the Jackson zoo.

"As we know, we've seen many, many years of police chases in our city," Mayor Chokwe A. Lumumba said of the proposal to change the language in Mississippi 'hot pursuit' statute—Mississippi Code Section 99-3-13. "Some of which have been initiated for crimes that were really based on a property issue of low value."

"I, myself, almost got hit by a police chase near the Jason's Deli area," he added. "They were chasing a guy who supposedly stole some earrings from Walmart; and, you know, it really puts our citizens in danger."

"While we certainly understand that there are things that are necessary for the protection of human life, and there are some very vicious crimes that may take place, it certainly will require, what this resolution seeks to do is at least qualify some of those things that you cannot pursue over. If it's over small property issues, then we shouldn't be having high-speed traces, putting people's lives in danger."

The mayor said he has advised residents who have been adversely affected by police chases to resort to legal action. "When cities start losing funds, when they start getting hit in the pockets, then that's when people (will start) to take notice of what's taking place here,” Lumumba said.

The mayor said that the work is ongoing to resolve the concerns noted in Gov. Tate Reeves' comment for vetoing the water bill, Senate Bill 2856, in June.

"This was an item that received unanimous support from both the House and the Senate," Lumumba said. "I want to make it clear that this is a resolution that does help Jackson out of a very difficult circumstance, both as a city and for our residents."

According to the council resolution, the bill, if passed, would give room for "rate structures and customer affordability programs to assist low-income customers and to generally allow for adjustment, release, or extinguishing of indebtedness from customers water and sewer bills under certain circumstances."

The proposed land-bank legislation, according to the council resolution passed Tuesday, will empower such banks to acquire, manage, and facilitate the redevelopment of underutilized, vacant, blighted and tax-delinquent properties. The problem of blight in Jackson has led to great disaffection among the people.

“The City of Jackson's inability to adequately address these problems has led to some residents and businesses struggling to maintain presence in the city or altogether leaving the city, resulting in a loss to the City of Jackson tax’s base,” the resolution says. “These troublesome areas have become targets for illegal dumping and breeding grounds for criminal activities.”