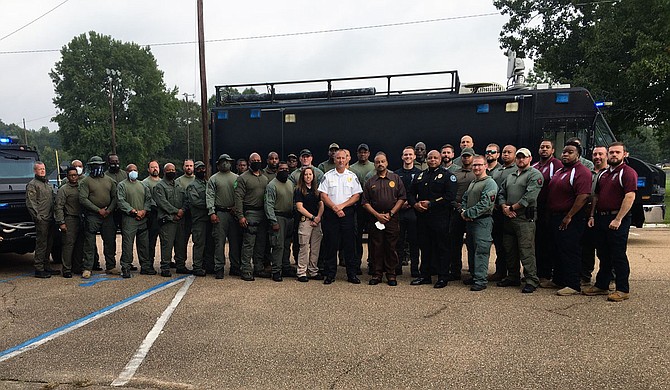 Deputies and officers from the Hinds County sheriff's office and Jackson, Clinton, and Byram's police departments are part of the SWAT unit.

"The combined personnel train together and utilize necessary resources and logistics to respond to special threat situations throughout the Hinds County area," Captain Tyree Jones, the public information officer for the Hinds County Sheriff's Office, wrote in a statement. "The officers from the other agencies will be deputized in an effort to assume individual jurisdiction throughout Hinds County when operating in the capacity of the Jackson-Hinds SWAT Team."

The team will not deploy daily, Vance told the Jackson Free Press. The arrangement continues what the late Hinds County Sheriff Malcolm McMillin, who served from 1991 until 2011, started during his tenure, Vance added.

McMillin combined the Hinds County SWAT team with that of the Jackson Police Department during his tenure. "And since then, obviously we have added the Byram and the Clinton police departments," Vance said. He said he needed to swear the members in after he took office to “maintain the status of the SWAT team.”

The city councils of Jackson and Byram entered into a memorandum of understanding for collaboration on the team. On May 18, the Hinds County Board of Supervisors committed to the arrangement, with Jackson City Council following earlier this month.

Violence-prevention expert Ron Noblett sounded a note of caution about the SWAT team in a phone interview with the Jackson Free Press on Aug. 27 after hearing of the county's plan.

"My belief is that there are some good reasons for developing a small SWAT team," he said. "Unfortunately, there is a tendency among police departments to give more and more responsibilities to swat teams and to militarize them."

Noblett is a senior consultant on conflict and violence for the Urban Peace Institute in Los Angeles, who is intimate with Jackson’s violence challenges. He was a lead on-the-ground researcher in the 2016 BOTEC Analysis studies of Jackson crime, yielding five detailed reports on causes and solutions. Then-Attorney General Jim Hood ordered the BOTEC study, and the Mississippi Legislature funded it.

"(Using the team to deal with) an active shooter makes sense, but then any situation can (be called) an active shooter (situation)," Noblett cautioned. "Domestic violence is extremely tricky; police more often than not can make a domestic-violence situation worse because they have not been trained to handle the situation properly."

The Hinds sheriff, though, argues that the SWAT team can help lower violence. "People like to see law enforcement agencies working together," Vance said. "It is a symbol of that. It is a symbol of cooperation among jurisdictions. We also believe that all of us work very hard, but we should learn how to work smart and combine three units. I think it is an example of us working smart."

"There is no extra cost to it," he said. "The key here is that I have learned down through the years that nobody has enough resources. I think it is a smart thing for us to combine resources, and this is an example of that."

Vance emphasized that the SWAT team is targeted at dealing with active-shooter situations and will not operate on the street daily.

"They are deployed into situations where a regular group of police officers really don't have the kind of tactics that are needed to resolve the situation," he said. "Therefore, we will bring SWAT in. They are reserved for problems we can't solve with regular patrol officers."

"In law enforcement now, as far as active shooters (are concerned), the first officers that respond are mandated to try to stop the threat," he added. "But if they are not successful and (involves a) barricaded person (with a gun) in (a place), what we try to do is resolve these situations peacefully, and if we can't resolve them peacefully, then we will give the SWAT (team) instruction to end the situation, take care of the threat so we can be safe."