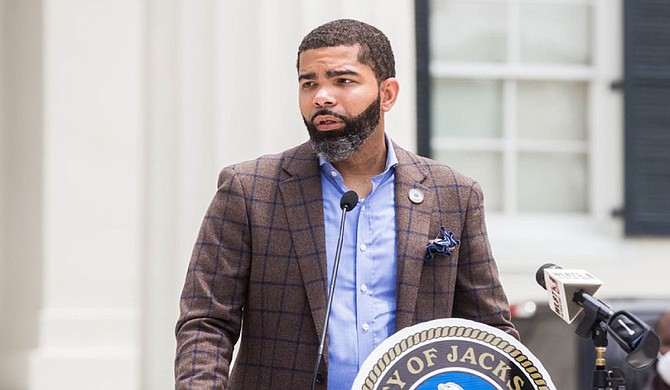 Mayor Chokwe A. Lumumba said a new data-sharing agreement with the Mississippi State Department of Health will help direct resources to specific places where the need is greater. Photo courtesy City of Jackson

A COVID-19 data-sharing agreement between the Mississippi State Department of Health and the City of Jackson will give a clearer picture of coronavirus spread for better-targeted responses in the capital city, Mayor Chokwe A. Lumumba told the Jackson City Council Tuesday.

"We will be able to say that we are moving resources into (certain) areas because of concerns about the rate of change happening (there)," Lumumba said. "(We) intend to be responsive based on that data."

The council approved the agreement.

Chief Administrative Officer Robert Blaine emphasized that the agreement, which the mayor and State Health Officer Thomas Dobbs will sign at a yet-to-be-determined date, will give a picture of the hotspots of the virus in Jackson.

"Specifically, this agreement is to be able to share demographic data on infections within the city limits of Jackson," he said. "It breaks that data down by census tract, which are groups of 2,000 citizens. What access to this data will do is allow the city to respond to hotspots around the city. It will allow us to be able to have internal (data) that is focused on how we allocate resources in areas of the city that need it the most."

The city council’s order authorizing the agreement between the two parties noted that MSDH "has been compiling an assortment of data points related to the prevalence, location, demographics and/or factors related to COVID-19 cases in Mississippi."

According to the order, the proposed MoU will improve the "provision of services and information to members of the public affected by COVID-19" and "determine where resources should be deployed to curtail the spread of COVID-19."

The order passed 6-1, with Ward 3 Councilman Kenneth I. Stokes voting no, after he asked if council members will get monetary assistance for people in their wards dealing with burial costs of COVID-19-related deaths in their families.

"These are the calls we are receiving: 'my husband just died, can you help to get him buried?’" Stokes said. "How are we going to have the fund to help these older people who lose their husband and loved ones to the virus? This is not being discussed in reality. These are the calls I am getting.

"We’ve got to have some sensitivity to these citizens who are losing their loved ones. These are the people you don't see on TV. I live by Jackson Memorial (Funeral Home). Every weekend is funeral after funeral after funeral. We are dying in this city, and people are treating this like it's a joke."

The mayor said the City can't accommodate such burial expenses, saying the City’s resources will go to preventing infection and loss of lives.

"I will love to sit here and tell you that we can start helping with funeral services, but that is not our reality," Lumumba said. "So what we do have we want to use to affect the outcome. We want fewer funerals, and we want fewer people infected, fewer families hurt by the pain of lost loved ones."

The mayor said the City had been a leader in its COVID-19 response.

"We have been leading from the bottom. If we take a measure, then the State takes (the same) measure, every single time," he said. "We were the first one to issue the mask mandate. We were the first one to shut down the city. So we take it seriously even if we get the blowback based on the effort that we are taking, all of that is aimed (at protecting) lives, to protect our citizens because that is what we hold most dear and most precious."

County-wide SWAT Team ‘Will Not Be Used Against Our Citizens’

The development of a county-wide special weapons and tactics team involving Clinton, Jackson and Byram moved a step further Tuesday when the city council approved the signing of a memorandum of understanding between the three cities and Hinds County.

This follows the earlier approval of the measure at the May 18 Hinds County Board of supervisors meeting.

Mayor Lumumba said, however, that the SWAT team will not be for domestic purposes, but focused on high-risk situations like hostage or active-shooter incidents.

"This is not a new effort, and I know there has been a large national discussion around the (concept of) SWAT teams," he said. "The Jackson SWAT team is not utilized for domestic circumstances. If there is a hostage circumstance, the SWAT team will be deployed (and) if we have an active shooter situation, which within recent history has been an unfortunate reality.

"And while there may not have been a formal agreement, it has been utilized in recent history. There was a hostage circumstance in Clinton; the Jackson SWAT team went out to assist. The Jackson SWAT team is first class in their marksmanship, many of them having competed around the world," the mayor said, "but it is not used in domestic circumstances. So it will not be used against our citizens."