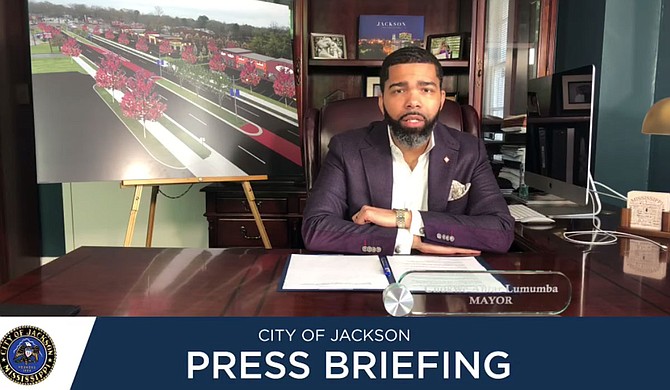 On April 9, Mayor Chokwe A Lumumba announced that S&P Global Ratings issued the City of Jackson an A+ bond rating. The Mississippi Development Bank has also approved a $40 million bond for the City to carry out vital infrastructure projects, including the beautification of the Medgar Evers thoroughfare. Photo courtesy City of Jackson

Even as the nation and world continue to plunge deeper into a possible recession in the wake of COVID-19 pandemic, the City of Jackson’s long-term bond rating for general obligation bonds has shown improvements, Mayor Chokwe A. Lumumba announced yesterday.

On April 7, the financial services firm S&P gave Jackson an A+ rating in its Global Ratings report based on the City’s pre-COVID-19 financial performance. The positive rating stems in large part from the $89.9 million settlement that the City had reached with Siemens Corp. several weeks back, Lumumba noted during an April 10 press conference streamed from his office.

The positive bond rating, combined with a recent $40 million bond initiative that the Mississippi Development Bank approved for the City to carry out vital infrastructure work, places the City of Jackson in a better position to withstand the economic fall-out of the novel coronavirus outbreak, Lumumba said.

“Despite the uncertain times that we face as a city and globally, planning and effective financial management have prepared us to weather this storm,” the mayor said.

“Through recent struggles that we have experienced, through our enterprise fund, through the financial challenges that the city has experienced in recent years, we have had downgrades in our rating,” he said.

But the City had “rightsized its operations” and hiked taxes to stabilize its finances, which contributed to the City of Jackson’s operation surplus between the 2016 and 2018 fiscal years, Lumumba pointed out. That surplus was a driver of S&P’s high rating for the City, the report explained.

“I would like to applaud my Director of Administration LaaWanda Horton and her team for the great work on behalf of the City of Jackson, putting us in a better financial position than we have been over the last several years,” the mayor said.

“We will continue to work upon this success,” he added.

The funds that the City was able to recoup from the Siemens settlement were another factor in the positive rating.

“One of the major components that was listed in S&P… was that the City took the bold measure in pursuing civil means in order to change or rectify the losses we had experienced through the Siemens contract,” Lumumba explained.

“This news from S&P demonstrates that (the) difficult choices by this administration … over the past year have yielded positive results.”

The City intends to begin work on a variety of projects through the $40-million bond, the mayor said, though he did stress that $40 million was not enough to carry out all of the work the City deems necessary.

He highlighted two improvement projects in particular during the press conference. One is a beautification project slated for the Medgar Evers Boulevard thoroughfare, between Five Points and Sunset Drive. The Hinds County Board of Supervisors has also committed to continuing the project where city limits end, Lumumba confirmed.

The Medgar Evers thoroughfare project would not only benefit the community living in that area, but it would “also give an appropriate honor to the namesake of that street, the true representation that it deserves,” the mayor said.

The City is also planning a major project on Capitol Street, the mayor said, among other improvements.

“I want our residents to stay encouraged while we are in a moment of confusion, a moment in which so many things have been turned on their head. It is good to know that there are positive things taking place,” he said.