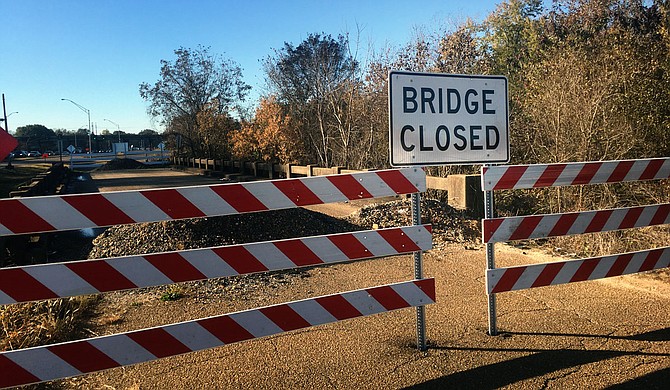 The incoming Hinds County Board of Supervisors could vote to halt previously approved road and bridge repairs. Photo by Kristin Brenemen.

The Jackson Zoo will benefit from a $50,000 grant from the Hinds County Board of Supervisors. The board voted 3 to 1 Monday, reversing its earlier decision to withhold the grant because the zoo is now closed and awaiting its new management to get its license to operate the facility.

Board Attorney Peter Teeuwissen stated at the meeting that he and Board President Peggy Calhoun had each confirmed with the Mississippi attorney general that contributions from the county to the city for the zoo are legal.

"The attorney general's office has opined that ... the county can indeed make that contribution if the board so desires," Teeuwissen stated.

Calhoun confirmed to the Jackson Free Press in a phone call that the attorney general deemed the zoo operational, even though it is currently closed to the general public.

The zoo has remained closed to the public since Sept. 30 as it awaits its new operator, ZoOceanarium Group Inc., to obtain an operational license from the U.S. Department of Agriculture. Employees lost their benefits when the zoo closed but continue to care for the animals on a temporary contract basis with the City.

Late last month, the Jackson City Council approved Mayor Chokwe A. Lumumba's proposal to apply for the City's own USDA license to exhibit animals at the zoo. Obtaining a license on behalf of the City was "one part proactive, one part protective," Lumumba told reporters, and would grant the City greater flexibility and protection if it chooses a new operator in the future.

Outgoing District 4 Supervisor Mike Morgan voted against giving the county grant to the zoo. He expressed concerns about allocating taxpayer funds to a zoo that the public cannot access—a point he had brought up during last month's vote.

"I certainly don't want to send $50,000 for a zoo that's not operating," Morgan said. He also asked if the board could insert a provision in the motion stating that the county will get its money back if the zoo does not open back up.

"So the attorney general is saying we can give them $50,000 even if they use it just to feed the animals for a closed zoo that the public can't access?" Morgan asked Teeuwissen.

"That's exactly right. And remember, my job is to cover you," Teeuwissen responded.

"I know you don't want to get dragged into a political conversation, but I fail to see the benefit ... for Hinds County taxpayers for paying for a zoo that is not open to the public," Morgan said. "I'm still not in support of this until we get some plan or announcement from the City that there is a plan to reopen the zoo. That's where I stand on this."

Morgan told the Jackson Free Press that, after last month's vote to reject the grant, he had sent a request to Attorney General Jim Hood about the legality of funding a closed zoo. Although Hood's office had signed an interlocal agreement earlier this year to allow county tax dollar spending on the capital city's zoo, Morgan wanted to confirm that this was still the case, as the zoo had closed since the signing of the agreement. The response he received was vague, he said.

"The response I got from the AG's office was 'We cannot approve or disapprove on something you've already declined to pay—we can only tell you if it is legal to pay it,'" Morgan said, paraphrasing the letter. He added that he believes Hood "sidestepped" his question.

Teeuwissen said he would follow up with the attorney general, but Morgan did not have an opportunity to speak with Teeuwissen before Teeuwissen brought up the vote at Monday's meeting.

"I trust Pieter but I didn't feel comfortable voting for it until I had done a little more homework, so I just voted against it," Morgan said.

In order to receive the $50,000, the City must request the funds through an invoice prior to Dec. 31, Calhoun confirmed.

Repair of Roads and Bridges

The status of previously approved road and bridge repairs remains uncertain with a new Hinds County Board of Supervisors set to assume office on Jan. 1, 2020.

Calhoun raised concerns at yesterday's board meeting over whether the county would complete all the projects approved under her administration before the new year. She directed her concerns to Murry Stewart, an engineer who works for the Hinds County Department of Public Works on a contract basis.

"The current board has a lot of street projects, bridges and what have you that have been approved for work, for construction," Calhoun said to Stewart before asking him about the likelihood of completion.

"I think you know why I'm asking, and that is because, with the weather getting cold, we cannot lay asphalt," she added.

"I think you can get some of them done, but probably not all of them," he said.

Stewart added that bridge work, which is not as susceptible to weather changes as paving asphalt, could resume, barring any scheduling conflicts.

"A lot of these contractors—paving and bridge contractors—when it gets to be the middle of December, they all shut down. Even if the weather is pretty, they all pretty much shut down for Christmas. ... I'm just being honest," Stewart said.

It is unclear how many road and bridge projects changes in administration could affect, as the Hinds County public works director was not available for comment by press time. But Calhoun confirmed that a new board cannot halt any construction that is already underway. Morgan also told the Jackson Free Press that the county does not pay for projects until after construction is complete.

Morgan said that district location can impact the timeline of paving projects. Districts 1 and 3, headed by supervisors Robert Graham and Calhoun, respectively, are located entirely within the Jackson city limits, which means that supervisors must negotiate an interlocal agreement with the City for each project, causing delays. But in the remaining rural districts, paving projects can begin as soon as the board approves them, Morgan said.

During yesterday's meeting, Stewart said the Department of Public Works is currently repairing at least four different bridges, and the board voted to approve two additional emergency bridge repairs on Smith Station Road, in District 2, after the State of Mississippi closed the bridges. Repairing those two bridges will cost the county $284,000, Teeuwissen said, adding that the State spends an average of $1 million to repair just one bridge.

The board praised Stewart and the rest of the public-works team for their rapid and high volume of completed projects.

"Since February 2018, we have completely reconstructed 25 bridges," Stewart said. That is higher than the average of two or three bridge repairs that most counties in Mississippi carry out per year, he said.