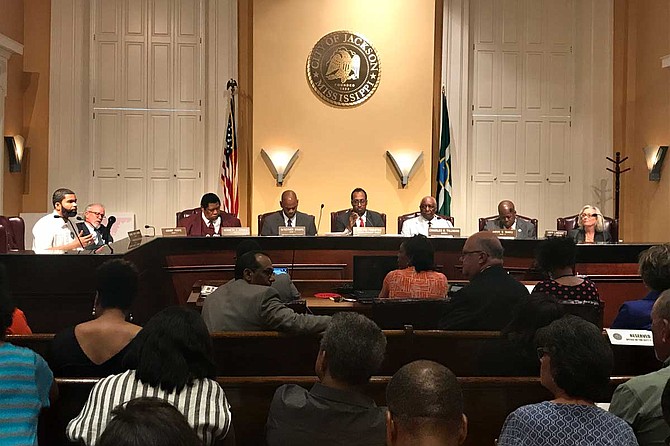 City council members discussed the events surrounding Officer James Hollins with the Jackson Police Department at its meeting on May 28. Photo by Aliyah Veal.

It was near the fifth hour of Tuesday night's Jackson City Council meeting when Ward 4 Councilman De'Keither Stamps lectured his fellow members on the value of the Farish Street Heritage Festival in October. For 45 minutes, the council deliberated whether or not to award an additional $20,000 grant to help fund the annual event, which celebrates the culture and legacy of the Farish Street District through live concerts, food vendors, and arts and crafts.

"I'm asking my council where do y'all stand on using the resources that are in the Farish Street Stabilization Fund to pay for these?" Stamps asked.

"All that we have been trying to get the answer to since you've brought this up is a confirmation that the money is there and not already spent on something. That's all I've asked," Council President Melvin Priester Jr. of Ward 2 responded.

Lee King, executive producer of the festival, had asked the council for additional money because Visit Jackson, the local convention and visitors' bureau, cut the festival's budget by more than half. Last year, he said, the event received $75,000 in funding, but this year, Visit Jackson cut the budget to $30,000.

Visit Jackson faced an overhaul and a probation of sorts last year after questions arose about its spending and budget, as the Jackson Free Press reported then. A grant request for the festival also caused council infighting a year ago this week.

Stamps and Ward 5 Councilman Charles Tillman were the only council members ready to approve King's request, but the rest wanted to hold off until they could get additional information.

King vented his frustrations regarding what he framed as the council's ineffectiveness to help keep the festival alive.

"I am at a point right now that if this city does not want Farish Street festival, we need to be real clear about it so I can go do something else," King told the council. "'Cause at this point I'm kind of tired, frustrated and just at a point where I just want to give it up."

His comments seemed to offend Mayor Chokwe A. Lumumba, who said he worried that King was trying to disrupt a process where the council sets aside unbudgeted funds for festivals and other events happening around the city.

"Once you kind of offend people about asking them to go outside of a process that they pretty much established for you, then that doesn't take into account that they were thinking about you when they created this budget to begin with," Lumumba said. "And that's what I find to be problematic."

Last year, Lumumba expressed support for the late request, emphasizing that the City should require a request-for-proposal process instead of organizers coming to council to ask for money for event late in the cycle. He suggested that Farish Street event planners come to budget hearings in the summer to learn the process. At press time, it was not clear whether this happened.

"We do all this politicking at a later hour when were talking about going into an emergency fund. ... [W]e have some very real emergencies," the mayor said a year ago.

This week, King fired back at the mayor, saying he was offended because he was not aware of that process and because he has been getting the same results from the council every year that he has asked them for funds.

"I'm still offended that for all of these years, every year, I come regardless of what you set up to ask to save this festival to no avail," King told Lumumba.

The mayor wanted to respond, but Priester interrupted him, reminding the council of how long the meeting had dragged on.

After a lengthy discussion, the council voted to award King an additional $20,000 grant. Ward 1 Councilman Ashby Foote and Ward 7 Councilwoman Virgi Lindsay were the only members who opposed the late-hour grant. Foote said he loves music, but he is "against all the music stuff." Lindsay said she wanted to see audited financial statements from previous festivals.

At the meeting, the council amended the agenda to have a discussion with Jackson Police Chief James Davis regarding events that occurred over the Memorial Day holiday involving a Jackson Police officer. On Monday, Officer James Hollins died from a self-inflicted gunshot wound on Interstate 220 before a JPD press conference addressing accusations that he sexually assaulted a minor.

"I think we all have a number of questions as a council, so I want to try to give my colleagues and myself a chance to talk to the chief and talk to the mayor," Priester said at the meeting.

Ward 3 Councilman Kenneth Stokes said the most important thing the council can do is be open and honest with the public. "We must always keep government open, and let the people know we're not going to hide anything or sweep anything under the rug," he said.

Earlier Tuesday, attorney Lisa Ross, who represents the family of a 15-year-old girl whose family saidHollins had sex with in the back of his police cruiser, told the Jackson Free Press that they were looking at "all legal options." The accusations amount to claims of statutory rape; a 15-year-old cannot legally consent to sex in Mississippi.

The council voted Tuesday night to enter an executive session to discuss personnel and litigation details with the Jackson Police Department, which lasted for an hour and 20 minutes. The council took no formal action, but following that session, Lumumba urged the media to be mindful of the words they use.

"I'd like to speak to the responsibility we all have ... to be aware that our words have impact," he told those gathered. "The power of life and death is in the tongue."

That is a reference to a biblical passage in Proverbs, which Lumumba also invoked at a press conference earlier Tuesday when he addressed Hollins' suicide and the allegations against him.

Ward 6 Councilman Aaron Banks told the Jackson Free Press that he was thinking about steps the City could take to prevent future incidents of sexual abuse.

"How do we address the culture within the police department? How do we look at things to prevent both from happening again?" he said. "How do we ensure that there are levels of method of accountability so that we won't have our daughters suffering from being victims?"

To prevent future suicides, Banks suggested providing mandatory counseling for officers put the Internal Affairs Department place on administrative leave due to accusations. "Are we using the wherewithal that we have and the tools that are necessary to keep something that we can prevent from going all the way out of control?" he said.

A Celebration of Jacksonians

In its first hour of the meeting before the later fireworks, the council recognized Conyetta Wesley, who was the 2018 valedictorian at Siwell Middle School, for his high averages in various subjects. He has a 92% in science, 90% in social studies and 92% in mathematics. He will attend Provine High School in the fall. After graduation, he hopes to attend New York University to pursue a degree in counseling psychology.

"Dreams without actions are merely wishes," he said at the meeting.

Mary Hill is a school nutritionist specialist who has worked for the Jackson Public School District for more than 35 years, helping serve breakfast, lunch and snacks to students. She attended the University of Southern Mississippi, from which she earned a bachelor's degree in home economics. The council gave her a resolution for her work with Jackson Public Schools and to celebrate her retirement this year.

"It is very humbling that I stand before you to receive this," she said. "I just want to honor these individuals in this room who have been my backbone for these 35 years."

Beverly Wade Hogan is the 13th president of Tougaloo College and the first woman to hold that position at the institution. She attended the college for her undergraduate studies, earning a bachelor's degree in psychology. She earned her master's in public policy and administration from Jackson State University. She earned her doctorate in human and organizational development at Fielding Graduate University in California. She has also received honorary degrees fromWiley College, Rust College, Brown University and Benedict College. After 17 years at Tougaloo, she plans to retire on June 30.

"I've been blessed to do work that aligns with my own personal values," she said.

The council celebrated the Southwest Jackson Soccer League for winning the state championship. The team is co-ed and consists of 12- and 13-year-olds who played against all-boys teams. Commissioner Reginald Burks commended his team for the hard work they put it and thanked various soccer leagues around the city who lent aid to them when they needed it.

"Their reward is the championship. My reward is for them to go to college and get good scholarships," he said to the council.

Burkes said in the past three years, Southwest Jackson Soccer League has been able to put 15 kids in college through scholarships.

The council awarded a resolution to Michael Hurst Jr., U.S. attorney for the Southern District of Mississippi, for his work in getting justice served for the family of Brittany Green. Last December, Green was shot to death at a gas station on Woodrow Wilson Avenue. Hurst helped with the capture of Green's alleged murderer, Jason Garrett. The U.S. Marshals Service found Garrett in Georgia, arrested him and brought him back to Jackson in May.

Carolyn Green Kennedy, Brittany's grandmother, thanked Hurst, the council and the mayor for helping their family.

"When we met with (Hurst), I had just been destroyed. It was just so heartbreaking to me to know that it had been three months and nothing (was done)," Green Kennedy told the council. "And he told me, Ms. Green, I promise you we're going to get him, and I just want to thank (him) for that."

Hurst did not attend the meeting, but Stokes promised they would hand-deliver the resolution to him.

The council gave the last resolution to Pete Brown, a resident of Jackson and the first African American to win a PGA championship, which he did in 1964. On top of receiving a certificate for his work, the council also approved Sonny Guy Park be renamed to Pete Brown Park. Brown passed in 2015, but Margaret Brown, his wife, accepted his certificate on his behalf.

"Pete helped any and everybody. Don't care what you need. If he's got it, you can get," his wife told the council.

In the original version of this story, we spelled Sonny in Sonny Brown Park as Sunny. The Jackson Free Press apologizes for this error.