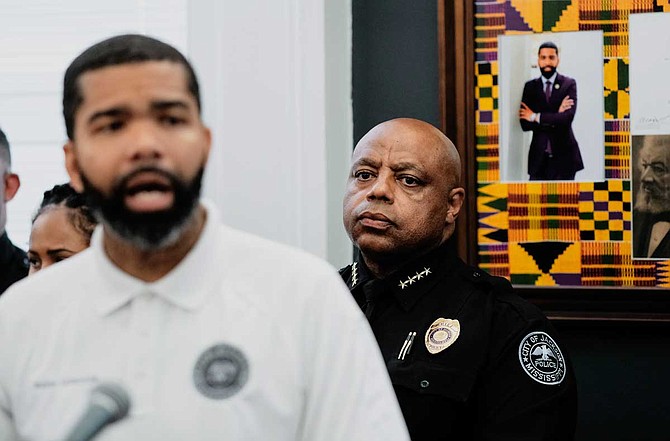 Jackson Mayor Chokwe A. Lumumba joined Police Chief James Davis at a press conference on May 28, 2019, where he defended JPD's handling of sexual-assault claims against Officer James Hollins, who committed suicide on May 27. Photo by Ashton Pittman.

JACKSON—Jackson Police Chief James Davis was four words into answering a press question about whether he had any regrets for his handling of sexual-assault allegations against an officer when Mayor Chokwe A. Lumumba stopped him.

"I got a call—," Davis managed at a City Hall press conference on Tuesday before Lumumba tapped his shoulder, signaling for him to move aside.

"If you're asking the question whether we felt that the response once the tragic details were revealed was sufficient, I believe that it was," Lumumba said after stepping into Davis' place.

On Memorial Day, JPD Officer James Hollins took his own life with a self-inflicted gunshot wound on Interstate 220, shortly before JPD held an initial press conference announcing allegations that he had sexually assaulted a 15-year-old girl.

"I'd like to begin my remarks by first recognizing and addressing the human tragedy that has taken place," Lumumba said.

Invoking a biblical passage about how "the power of life and death are in the tongue," Lumumba said he wanted "us to be admonished."

'Someone Should Have Shown Up'

Lumumba gave the media a timeline of events leading up to his press conference. Late Saturday, he said, Chief Davis received a phone call from the alleged rape victim's mother claiming he had been having sex with her daughter for months—a claim that amounts to statutory rape under Mississippi law, which sets the age of consent at 16 years old. Davis met with the mother on Sunday, where she presented video evidence of the alleged sexual abuse in the backseat a police cruiser. 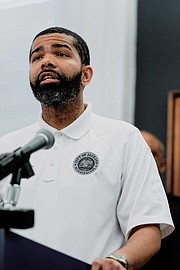 Jackson Mayor Chokwe A. Lumumba chided the press on Tuesday, telling them to put “facts and information above salacious headlines.”

Lisa Ross, the attorney for the family that is accusing Hollins, told the Jackson Free Press after Lumumba's press conference that the mother tried calling Davis around 11 a.m. Saturday to report the abuse, but he did not try to call back until nearly 9:30 that night. The girl's mother missed that call, Ross said, but dialed back and finally got in touch with him at 10:17 p.m. Davis then told her he would not send anyone out that night, Ross said.

The attorney confirmed that Davis did meet with the mother on Sunday, but said "someone should have shown up" on Saturday.

Jackson City Council President Melvin Priester Jr. says there should be no argument over the need for the police chief to have met immediately with the mother when she called to report the alleged rape.

"What are we even debating?" he wrote on his Facebook page today. "If Lisa Ross or a mother in Lisa Ross's office calls to tell you that a COP IS REGULARLY RAPING A CHILD IN A POLICE CRUISER, you don't put that meeting off until tomorrow."

"There are too many people who have spent the night in jail for simple assault or drunk and disorderly with way less evidence than a mother with a cell phone vid and testimony that 'this man in a position of authority abused my daughter.'"

'Why Is This Police Car Coming to Your Home?'

The girl's mother began to have suspicions after she noticed her child acting different and after people started calling her to report odd sightings, Ross said.

"People who saw things and called her reporting them: 'Why is this police car coming to your home?' ... This alerted the mother that something was going on and it had a connection to the Jackson Police Department," Ross said. "And so she started to call the commander last week and did not get a response, and so when the commander did not return her phone call, someone asked her to give me a call to help facilitate the process."

Ross met the mother Saturday morning, before her first attempt at calling Davis.

At Tuesday's press conference, Lumumba said that the video, which has not been made public, shows people engaged in sexual acts, but that no faces are visible.

"They don't have to show faces," Ross told the Jackson Free Press. Most of the time when there is a video of a sexual assault, she said, the perpetrator's face is not shown.

"This young lady has identified him as the person who sexually assaulted her," Ross said.

She said Hollins admitted to the assault during a phone conversation with the alleged victim's mother.

"He called the mother's phone on Sunday evening and said what he had to say," Ross said. "And the mother listened. In light of everything that was going on, she was very respectful. She did ask him some questions, and he did answer."

Ross said the mother asked Hollins why he had sex with her daughter in the back of a police cruiser. "He said it was crazy, it was just crazy," Ross said. "He apologized for his conduct and said he planned to take responsibility for it."

The attorney said the family did not hear back from Hollins again before his death the next day.

Family Exploring 'All of Their Legal Options,' Ross Says

At Tuesday's press conference, Lumumba said Davis contacted JPD's Internal Affairs Department after his meeting with the mother on Sunday, which initiated an internal and criminal investigation. Though the investigation was still pending, Davis placed Hollins on administrative leave. JPD asked the victim's mother to come in to file a criminal affidavit.

"She thought that's why she was visiting the police department, but no one gave her an affidavit to complete," Ross said. "And on Monday I received a text to my phone from (Hinds) County Attorney Gerald Mumford, who said that as soon as an affidavit was filed, he would take action."

Ross said she and the family are exploring "all of their legal options." She alluded to someone, whom she would not identify, that she believes knew about the alleged sexual misconduct but did not act. That person, she suggested, holds a position that, under state law, requires them to report instances in which they believe a minor may have been sexually assaulted, but she would not say whether it was someone in JPD.

"Any comments, any stories, any reports to the contrary that Chief Davis did not respond immediately, is an untruth and an out-and-out lie," Lumumba told the press. "Out of this circumstance, this is confirmation of my choice for police chief."

Lumumba defended Davis, emphasizing his ability to act immediately regarding the allegations. His ire, in particular, seemed geared toward the press, whom he suggested ought to prioritize "facts and information above salacious headlines."

"When you have a circumstance like this, which is tragic in its own right, compounding it with misinformation only leads to more tragedy and more harm to all that are involved," he said.

The Jackson Free Press asked Lumumba what changes will be made to avoid future incidents of possible sexual violence by JPD officers.

"This is not something that is condoned by our police department, our city, or our administration," Lumumba said. "You continue to make that clear and train people."

The mayor added that they cannot account for the choices that some humans make, but they will learn from this incident.

Although Lumumba did most of the talking, Davis did send his condolences to the family of the victim and Hollins. "I want the citizens to know that you have a police department and you have a chief that cares about our city and we care about the conduct of our officers," Davis told the press.

Council President Priester wrote on Facebook today that actions are needed more than defensiveness on the part of City and JPD leaders.

"I hope that this guy was a lone wolf. I also hope we've got the press conferences out of our system. We're just had conclusive evidence of at least one, very rotten apple in JPD," he wrote.

"Confidence has been shaken such that we're not getting people back on our side by arguing over how fast the chief answered his phone and if the mother called back. The first thing that will get citizen confidence back is showing concrete steps that we will take to quickly and conclusively get to the bottom of this and showing how we will be the sort of department where this will never happen again."

Priester indicated that the defensiveness on display in the mayor's press conference today was overwrought. "These are not the biggest criticisms we are about to face before this matter is over," he wrote. "If we are pushing back against softball critiques ..., that lessens confidence that we will seriously engage in the sort of fair, independent and competent investigation that this moment demands."

After the initial reports first surfaced, some Jackson-area media outlets, including WJTV, reported that Hollins was accused of "having sex with" the 15-year-old—without noting the implications of statutory rape.

Ending the Silence on Sexual Assault 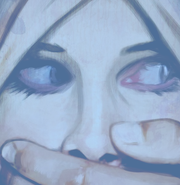 Ronni Mott explores the code of silence around sexual assault—a code that must be broken.

Laura Palumbo, the communications director for the National Sexual Violence Resource Center, said that kind of reporting "denotes that there wasn't necessarily harm done" and "softens" the actions of the accused.

"It tends to lessen the severity of people's reaction to it," she said. "In some ways, it justifies the behavior of the person who has caused harm, as if this is not necessarily something they did wrong, but a technical reason why it is not OK."

Consent laws are not just about age, she said, but about how minors can be "manipulated" by people in positions of authority—someone like a police officer.

"What we're talking about is actually an inappropriate and predatory behavior," she said. "Police officers have a position of trust and respect in most communities, and because of that, they have an increased level of responsibility to the citizens in the communities that they protect."

That "power dynamic," she said, is why it is not appropriate to use the same language we would use for consensual sex. That, she said, makes sex with minors sound consensual and only "sort of inappropriate" when it is "very inappropriate."