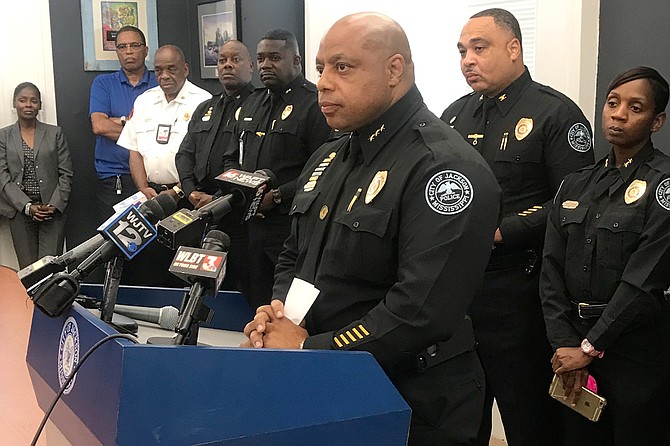 During an interview with WLBT, Mayor Chokwe A. Lumumba confirmed the officer's identity as 29-year-old James Hollins. WLBT also reported that the girl's attorney, Lisa Ross, said the assaults had occurred multiple times over the last six months.

The 15-year-old girl's family's claims amount to statutory rape under Mississippi law; a minor is unable to consent to sex until they are 16 years old.

Sgt. Roderick Holmes said in light of these allegations, Chief James Davis had put the accused officer on administrative leave on Sunday. He said the department takes accusations like this seriously.

"We want the family to understand that at any point in time if there's been any wrongdoing found during the course of this investigation, then we will not hesitate to take the appropriate actions," Holmes said in a video of the press conference.

Chief Davis was missing from Monday's press conference. When the media questioned his whereabouts, Holmes said he was not available, and he did not know where he was.

"The chief of police takes this matter very seriously as with any accusation involving any officer misconduct," Holmes said. "He's also taken the appropriate action by placing this officer on administrative leave, which, again, is standard procedure in situations like this."

When media brought up the existence of video evidence of the alleged abuse between the officer and the minor in the back of a patrol car, Holmes confirmed this fact, but did not offer more information.

"It's my understanding that there was some video of this particular situation. Again, I have not personally seen it, so I don't know whose actually in the videos to question," he said.

Holmes said results from an internal and criminal investigation will determine the next steps in the process. He was not sure if any federal agencies would be brought in to help with the investigation.

We reached out to the Jackson Police Department regarding the impact Hollins' death will have on the investigation, but they did not get back to us in time.

This story is developing. The mayor is holding a press conference at 1 p.m. today to address the situation.