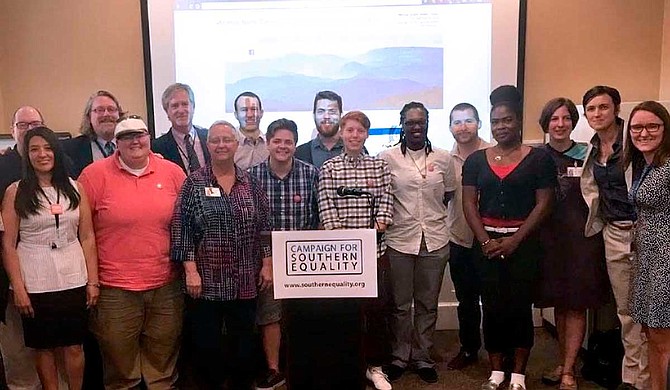 Leaders from the Campaign for Southern Equality joined forces with the Western North Carolina Community Health Services team in 2017 to launch their Southern LGBTQ Health Initiative, which focuses on healthcare issues in states like Mississippi. Photo courtesy CSE

Transgender Americans will no longer be protected from health-care discrimination after the Trump administration rolled back an Obama-era health-care policy on Friday. The change that the U.S. Department of Health announced on Friday follows a decision earlier this month to allow health-care workers to refuse to offer health services to LGBT people if they claim it conflicts with their religious beliefs.

"At least half a million transgender people call the south home, and every year, far too many struggle to find healthcare professionals that will competently treat them with dignity and respect," Ivy Gibson-Hill, the community health program director for CSE, said in the statement. "But the brazen disregard for trans people's health in the administration's new rule change underlines this disparity in bold black paint and gives discrimination a blanket thumbs-up. This policy is not just a step in the wrong direction; it's a hard shove off the map, the latest attempt by this administration to deny humanity to transgender people."

Since his election, Trump, who is now selling an "LGBTs for Trump" pride month T-shirt on his campaign site, has targeted LGBT rights, with a particular focus on transgender people. Early in his first year, he reinstated the transgender military ban that the Obama administration had ended, despite opposition from his top military leaders, including former Secretary of Defense Jim Mattis.

The latest policy is particularly harmful for transgender people in the South, Gibson-Hill, who goes by the pronoun "they," said on Friday.

"The policy exacerbates the need for trans Southerners to keep doing what we have been doing for years: find ways to bridge the gap between the care that we need and that which is available right now in our communities," they said. "We'll continue to do that in pursuit of our goal to build a South where transgender people can access their basic human rights—including their right to health care—without leaving their hometowns, no matter where they live."

CSE estimates that up to a quarter of transgender people do not seek health-care services for fear of discrimination. On its website, the campaign offers a guide to transgender-friendly providers in all 13 southern states, including in Mississippi.

"Today's announcement kicks off a several-week public comment period, where folks from across the country can write into the Trump Administration speaking out against the regulation, and then after that, a final regulation would be issued, which is when organizations or individuals would begin filing litigation against the rule," he said.

He advised supporters of transgender rights to leave public comments on the Protect Trans Health website at protecttranshealth.org, which the National Center for Transgender Equality and the Transgender Law Center will deliver to the Trump administration.

"The goal right now is to block the rule this way, since you can't file litigation over a proposed rule," he said.

In 2014, Mississippi Gov. Phil Bryant signed the state's Religious Freedom Restoration Act, which many LGBT groups opposed because they said it legalized discrimination against people based on sexual orientation and gender identity. In 2016, the Legislature passed and Bryant signed HB 1523, or the Religious Liberty Accommodations Act, which grants businesses the right to refuse to render services if doing so conflicts with their religious beliefs about same-sex marriage, pre-marital sex or gender identity.

CSE sued the state in 2016 to stop HB 1523. Although a federal judge in Jackson initially ruled it unconstitutional, the conservative Fifth Circuit Court of Appeals in New Orleans overturned that ruling and upheld it. The U.S. Supreme Court refused to hear the case, and the law took effect in January 2018.

Last week, all three Republicans congressman in Mississippi's delegation voted against the Equality Act, which would have guaranteed LGBT people the same rights against discrimination that the 1964 Civil Rights Act guarantees people on the basis of sex, faith and race. Only Rep. Bennie Thompson, the state's lone African American and Democratic congressman, voted for it.