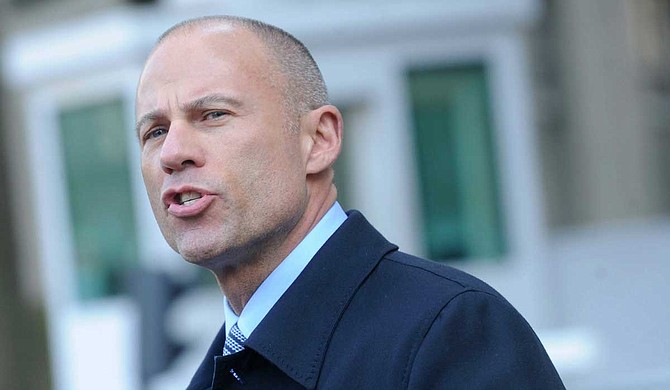 The U.S. Department of Justice alleges that Avenatti submitted false personal and business tax returns to The People's Bank, a federally insured bank based in Biloxi, in order to obtain $4.1 million in loans for his law firm and a coffee business.

"To obtain these loans, Mr. Avenatti submitted phony personal income tax returns claiming to have earned a total of $14.1 million in adjusted gross income for 2011, 2012 and 2013," Nicola Hanna, the U.S. attorney for the Central District of California, said at a press conference in California on Monday.

Between 2014 and 2016, the indictment claims, Avenatti sent the bank fictitious tax returns to procure three loans. In those faked tax returns, it alleges, he claimed he made between $4 million and $5.5 million each year from 2011 to 2013. He also told the bank he paid $1.6 million to the IRS in 2012 and $1.25 million in 2013, but he never even filed personal income taxes or made payments in those years, prosecutors allege.

"The People's Bank was ultimately repaid, but only after significant efforts and threats to refer one loan to collections," Hanna said.

“If this proves to be true, then Avenatti is nothing but a lowdown dirty thief in a fancy suit,” she wrote.

Prosecutors also charged him with allegedly embezzling a client's money and using it for his own expenses.

"Lawyers have a sworn duty to obey the law and to protect their clients," Hanna said. "Our system of justice depends on it. Mr. Avenatti has breached that duty, and violated the principles of honesty and fairness that he claims to uphold."

If convicted, Hanna said, Avenatti could face up to 50 years in prison.

On the same day, prosecutors in the Southern District of New York charged Avenatti with wire fraud and alleged he attempted to extort money from Nike. The indictment claims that he demanded millions in payments from the apparel company and threatened to use his national platform to harm their reputation with bad publicity if they refused.

This morning, Avenatti teased a press conference in which he said he would "disclose a major high school/college basketball scandal perpetrated by @Nike that we have uncovered," claiming with no evidence or details that it "involves some of the biggest names in college basketball."

Tmrw at 11 am ET, we will be holding a press conference to disclose a major high school/college basketball scandal perpetrated by @Nike that we have uncovered. This criminal conduct reaches the highest levels of Nike and involves some of the biggest names in college basketball.

Avenatti teased a press conference in which he said he would "disclose a major high school/college basketball scandal perpetrated by @Nike that we have uncovered," claiming with no evidence or details that it "involves some of the biggest names in college basketball."

Minutes later, agents from the U.S. Attorney's Office for the Southern District of New York arrested him, likely pre-empting his plans for a press conference.

Avenatti rocketed to fame last year as the attorney for Stormy Daniels, who alleged President Donald Trump had an affair with her more than a decade ago and paid her to stay silent about it in the weeks leading up to the 2016 election. In a tweet Monday afternoon, Daniels said she was not surprised.

"I made the decision more than a month ago to terminate Michael's services after discovering that he had dealt with me extremely dishonestly and there will be more announcements to come," she wrote.

Last year, Trump's former personal attorney, Michael Cohen, pled guilty to federal charges related to the payments he helped Trump make to Daniels in 2016. In 2018 filings, prosecutors in the Southern District of New York named Trump as an unindicted co-conspirator, referred to as Individual 1, who allegedly directed Cohen to commit campaign finance crimes by making the payment.

The charges against Avenatti, whom Trump has repeatedly attacked on Twitter, came a day after U.S. Attorney General Bill Barr declined to charge the president for obstruction of justice in a separate investigation into links between the Trump campaign and Russia. Trump appointed Barr late last year.

At the press conference, Hanna said his team coordinated with the Southern District of New York to announce the charges, but that they did not purposefully time the indictments to drop the day after Barr's summary of the Mueller report.

Last year, Avenatti floated the idea that he might run for president against Trump in 2020, but decided against it in December.