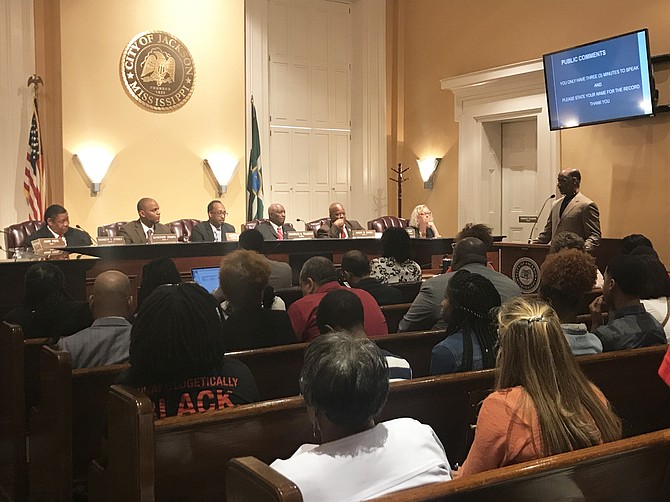 Jessie Thompson, founder of the Jackson Music Awards, speaks to city council members about the importance of southern soul music at the June 11 meeting. Photo by Aliyah Veal.

Lee King, executive producer of the Farish Street Heritage Festival, was back for the Jackson City Council meeting on June 11, but this time, his visit was cause for celebration instead of the conflict over sponsorship of the event that occurred at the last meeting. King was preaching the importance of Jackson becoming the birthplace of "southern soul" because of its rich history as a center for recording the iconic music on Farish Street and beyond.

"The birth of music in this rich, Mississippi soil is unprecedented. We need to recognize it," King told the council. "We need to make sure the world knows that Jackson, Mississippi, is the leader when it comes to southern soul."

Jesse Thompson, founder of the Jackson Music Awards, pointed to various examples of the genre's influence in today's music and pop culture, including Bruno Mars' mention of "Jackson, Mississippi" in "Uptown Funk," Bobby Rush receiving a Grammy and ESPN SportsCenter with Scott Van Pelt playing the Mississippi Mass Choir's "I'm Not Tired Yet."

Jackson, at one time, was a business hotbed for soul music, from Trumpet Records and other recording outlets on Farish Street to the still-thriving Malaco Records on West Northside Drive.

"Malaco Records, the founding record company that is worldwide, has displayed southern soul music to the entire world," King said at the meeting. "If we don't continue to promote the southern soul music, someone is going to claim it, we're going to lose it, and it will appear that it came from somewhere else."

Malaco Music Group was instrumental in recording, producing, and distributing blues and southern soul music. The studio opened in 1967, experimenting with local artists and songwriters, and producing recordings. The company didn't get its big break until Wardell Quezergue, producer and composer, brought five artists to Jackson in a borrowed schoolbus for recording sessions. These sessions created King Floyd's "Groove Me" and Jean Knight's "Mr. Big Stuff," which charted in the top 10 on the national R&B and pop charts.

The Pointer Sisters, Rufus Thomas and Paul Simon are among artists who have recorded at Malaco. The company attempted to break into the disco market, but ultimately fell back on their bread and butter: blues, gospel and southern R&B. Today, the company's gospel labels have won Train, Grammy and Stellar awards, among others. They have also launched Freedom Records, Malaco Jazz Records and J-Town, an urban contemporary, urban pop, label.

Gerald "Wolf" Stephenson, vice president of Malaco Records, said the company is honored to be recognized.

"We've been here over 50 years and have been a big part of the community. We've worked hard to bring some great music to the folks here and all over the country," he told the Jackson Free Press.

Council members unanimously voted for the resolution proclaiming Jackson, Miss., as the home and birthplace of southern soul music at Tuesday's meeting—emphasizing the economic-development potential of owning and promoting this history.

Ward 4 Councilman De'Keither Stamps said southern soul could be a marketing tool for the city and its talent. "This is a talent that we export and resources that we import," Stamps said.

"If you look (at) what happened with Nashville and country (music), Nashville was just a little ole bitty thang," Ward 3 Councilman Kenneth Stokes said. "You can't get into Nashville now. People coming from all over the world moving to Nashville. That can be the start with this southern soul. It can be the thing that jump-starts Jackson."

Emon Thompson came to City Hall last week to discuss pothole issues affecting the Brookleigh Hills and Brookleigh Hills II subdivision in south Jackson. He said Jimmy Smith, a resident of Brookleigh Hills, used to call regularly and follow up with the City about his complaints. However, Smith passed away, and Thompson took it upon himself to pick up where he left off.

Thompson pointed to caution signs around the potholes for two years, and that residents have constantly talked to Ward 6 Councilman Aaron Banks about how to get the issue resolved.

"We're asking that the City communicate with us better. It's not nice for someone to tell us that they're going to do something, and we never hear anything about it again," Thompson told the council.

Thompson, who has been living in Brookleigh Hills since 2008, pointed to potholes in the neighborhood that are two to three years old. When asked where the potholes were located, he told the Jackson Free Press, "The best question is where are they (are) not located. They're all over."

Potholes permeate various streets within the subdivision, including Riser Street, Cypress Road, and the intersection of Terry Road and Lee Street.

"We haven't had any streets paved since I've been there. We have been getting holes patched," he told the Jackson Free Press. "It doesn't last but two months. In some of the high-traffic areas, it looks like they put rocks or tar in it."

Potholes were the number-one reason residents called 311 last year. There were 1,835 complaints in 2017 and 2,028 complaints last year, the Tableau Public reported.

And just last year, Frances Fortner, 18, a graduating senior from Jackson Academy, was leaving graduation rehearsal when her car flipped over a partially covered manhole on Ridgewood Road. She died at the hospital. Her parents filed a wrongful death lawsuit against the City of Jackson, Superior Asphalt, Sigma Corporation, IMS Engineers Inc., and Integrated Management Inc., and their agents, contractors and employees in November. The city council rejected a $500,000 settlement with the Fortner family after going into an executive session on April 16 city council meeting.

Thompson said residents were complaining and calling 311 about the potholes, but were not getting a response from the city. He went to see Banks about the lack of response, but the councilman told him a state law prohibits council members from going directly to department heads with issues.

"A council person cannot direct an employee of the mayor. We have to work through 311," Banks told the Jackson Free Press on June 17. He said Banks recommended he come to council meetings.

"I got a large group of my homeowners to come and represent Brookleigh. That executive session was almost two hours, (and) all the people had left," he said of the May 28 city council meeting. "No one was left but myself and my board members. We decided to reschedule."

"We wanted to find out if there is anything scheduled in our neighborhood or anything else we need to do to speed things up a little bit," he said to the council.

Banks suggested that the City of Jackson develop a system of response or follow-up. "Either it's a written letter, an email or a phone call that lets those constituents know that they're putting stuff in 311, and that we received it," he told the council.

Keyshia Sanders, constituent services manager, said the City of Jackson has received a list of their issues, and she will keep in contact with Thompson about what is going on.

'It Would Be an Honor to Give You My Job'

Ruben Banks reflected on one of his most memorable interactions with Mayor Chokwe A. Lumumba at the June 11 city council meeting.

"I remember distinctly when we were working on Mike Espy's campaign, and we were walking. Mayor Lumumba asked me, 'How old are you?' I said I'm 17 right now. (The mayor) said, 'Well, at least I have a few more years before you come take my job,'" Banks recounted, garnering laughs from the audience.

"It's little moments like that where people around me that I remember, and I truly thank those people for investing time with me, even when I didn't see investment in myself," Banks added.

Banks received a resolution after the Commission of President Scholars selected him as a 2019 U.S. Presidential Scholar, one of three Mississippi High School students who make up the 55th class of U.S. Presidential scholars. President John F. Kennedy founded the award in 1964 to recognize and honor graduating seniors across the country.

Banks served as brigade commander over all seven JROTC units in Jackson Public Schools. Featured in the Jackson Free Press' 2018 Amazing Teens, he is a 2019 United States Senate Youth program selectee, a recipient of the 2019 Regional Valor Bronze Cross award and was president of Jim Hill's Student Government Association. He was a Mississippi Youth Media Project student in the summer of 2017, and he recently graduated from Jim Hill High School and will be attending the United States Air Force Academy in July.

"My goal is to hopefully graduate, attend law school and become a United States JAG officer, a law professional, in the air force," Banks said.

He thanked the council, the mayor, his instructors and his mom for their role in making him the man he is today. "My mother was always talking to me, teaching me and that led me to where I am today," he said.

Council members and Mayor Lumumba took turns praising Banks for his hard work and accomplishments. "People often don't have faith in what Jackson can produce. You give us the proof that we're moving in the right direction in this city," Ward 2 Councilman Melvin Priester Jr. said.

"He's selfless. This young man served on the officer ID task force with us. He continues to offer himself, and if you continue to walk on that path, continue to offer yourself, improve yourself, continue to be selfless, then to be entirely honest with you, it would be an honor to give my job to you," Lumumba told Banks.

The mayor ended his praise of Banks with a special message to the media.

The council also gave out resolutions to Col. Paul Willis for his 40 years of service to his country, community and Jackson Public Schools; Jayne Washington for her 35 years of service as an educator in Mississippi; Gregory Pippen for Ward 3 Father of the Year; and Pastor D.L. and Helen Govan for 70 years of marriage.

The City of Jackson declared the month of June LGBTQ & Pride month and proclaimed June 20 Mississippi Transportation Awareness Day in promotion of multimodality as a service. There will be music and food giveaways at Union Station starting at 11 a.m. that day. For more information, see this week's business news round-up.

Mukesh Kumar, director of planning and development for the City of Jackson, said buses will be free that day. He encouraged residents to leave their cars in the garage and ride bikes, walk or take the bus.

"You will see our city of Jackson in a completely different light. I guarantee it," he said.