Gipson: Officers Were 'Only Trying to Help' When They Shot His Father | Jackson Free Press | Jackson, MS

Gipson: Officers Were 'Only Trying to Help' When They Shot His Father 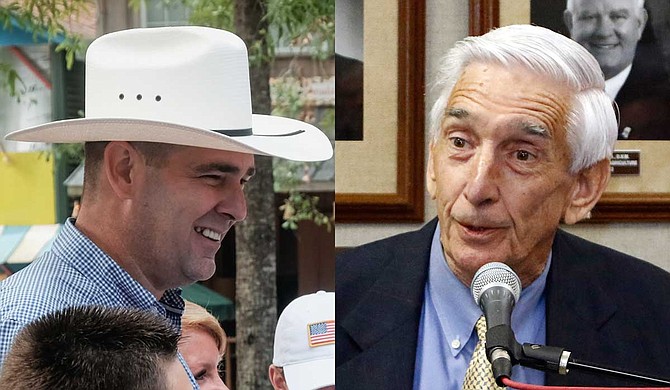 Mississippi Agriculture Commissioner Andy Gipson (left) said he does not blame the officers involved in the shooting death of his father, Harry Gipson (right). Photo by Rogelio v. Solis via AP

At age 18, Andy Gipson watched as a mule took off in the old-fashioned wagon his father was riding and hit a tree, catapulting Harry Gipson to the ground, breaking his neck in three places and fracturing his skull.

That was one of several accidents resulting in head injuries that the Mississippi agriculture commissioner relayed in the eulogy at his father's funeral on Sunday, where he told mourners that his father was "trapped in a prison of a broken mind" in his final days.

The Mississippi Bureau of Investigations is looking into the death of Harry Gipson, a 70-year-old evangelical preacher who died in an officer-involved shooting in Simpson County last Thursday. MBI has not released details on the investigation, and the Simpson County Sheriff's department would not comment when the Jackson Free Press reached out Monday morning, instead referring questions to MBI. At press time, MBI had not returned a Monday morning request for comment.

Andy Gipson posted the text of the eulogy on Facebook after the funeral on Sunday, which was not open to the press.

Andy Gipson posted the text of the eulogy on Facebook after the funeral on Sunday, which was not open to the press. In the eulogy, the commissioner said that he does not blame the officers for his father's death, and suggested it happened while his father was attempting to suicide.

"I want to say to all the officers involved, our family knows that you were only trying to help. You were trying to keep him from hurting himself, even though it seemed a point of no return had been reached. We as a family ascribe no blame to you, and we are praying for you and for your families who also mourn and grieve through this tragedy with us."

His father's death, he said, left him with a new personal mission: to fight for those suffering from mental illness.

"I will return to work as your Commissioner of Agriculture and Commerce, and I will continue to carry out all my responsibilities to the very best of my ability, just like my dad taught me to do," he said. "But I will also return with a new personal mission: to serve as an advocate unafraid to speak out on behalf of the thousands of Mississippians who even today are silently suffering the pain of traumatic brain injury, depression or mental illness."

In the mid-2000s, the elder Gipson fell 20 feet from a forklift onto concrete, cracking his skull. Then, in 2012, though wearing a helmet, he suffered head trauma after a motorcycle accident. In the last few years, Gipson said, his father struggled, vacillating between overactivity and depression.

Gipson said he would help carry on the Hilltop Memorial Children's Ranch, a Christian outreach program for children that his father built on their family farm.

"Daddy built the ranch including a full western town, a lake, a lodge and a chapel, and his greatest desire in life was to see children there, experiencing Mississippi farm life and the great outdoors, catching bass and hunting," Gipson said. "His goal was to reach children with the Gospel in a safe, fun outdoor environment."