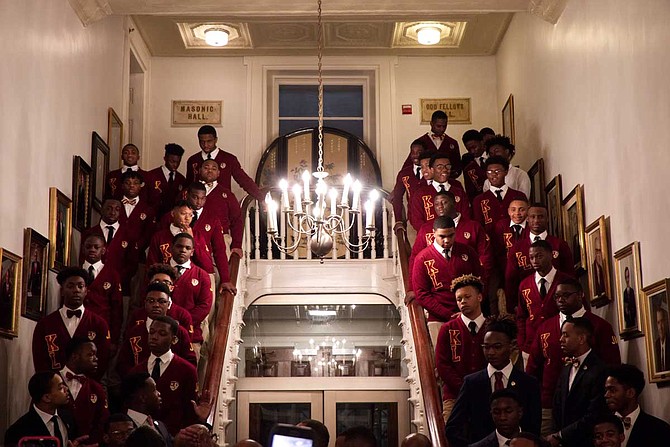 In operation for over a century, Kappa Alpha Psi Fraternity founded a youth-inspiration program, the Kappa League, which provides young people the opportunity to obtain both educational and occupational guidance. Photo by Taylor Langele

JACKSON — Young people of Jackson shuffled into Jackson City Hall on Jan. 22, 2019, at the start of the city-council meeting that evening. As the crowd of parents and teenagers waited patiently, stunned council members looked onto the crowd. "I don't want the fire marshal to bust us up," Council President Melvin Priester said, "so Mr. Mayor, we'll begin with your initiative."

"I don't think that there is a more appropriate moment to recognize the efforts of mentoring groups when we look at the recent violence in our community," Lumumba said at the Jan. 22 meeting. "We have to understand that it is the efforts of people who take out the time to mentor young people that has the most significant impact on things like violence."

"Every block will either be controlled by a negative force or a positive force, and we have to make the conscious decision and we will control our blocks with positive representations," the mayor added.

This is not the first time Lumumba has spoken out on the need for community involvement to help fight Jackson's violence epidemic at the grassroots level. "The essence of understanding how government works is really highlighted in this particular issue because when we better understand this problem, we understand that it really requires that everyone be involved," the mayor said at a Jan. 18, 2019, special city-council meeting about the spike in homicides in 2018, and in 2019 to date.

By the Jan. 22 council meeting, Jackson had seen 11 homicides in January alone, with Washington Addition resident George Robinson, 62, dying from head trauma after an encounter with police.

"I need the community to help in this effort," Lumumba said at the Jan. 18 special meeting. "We all have to be engaged in this process."

The council passed the resolution for the City of Jackson to recognize January as "National Mentorship Month." One by one, each community organization present made its way to the podium for council recognition.

Kappa Alpha Psi Fraternity had the largest constituency in the chamber. In operation for over a century, the fraternity founded a youth-inspiration program, the Kappa League, which provides young people the opportunity to obtain both educational and occupational guidance. Most of the young men in the room wore red cardigans with bright yellow Greek insignias on their left lapel.

Second was The 100 Black Men of Jackson Inc., which provides education services such as courses on financial literacy, processes of the judicial system and professional conduct; health and wellness services such as swimming lessons; and leadership and economic development through mentorship. Jackson's first black mayor, Harvey Johnson Jr., is its current president. The organization says of itself, "Our dedicated membership of real men giving real time through our Mentoring the 100 Way curriculum and programs make a holistic and sustainable impact on the quality of our youth, families and communities."

Next at the podium was an organization founded in the basement of Wells United Methodist Church in midtown during the turbulent era of the late 1960s. Today Operation Shoestring focuses on supporting children through educational development programs and family inspiration. Operation Shoestring takes an individual approach to each child and family member in need. With its "Project Rise," the organization provides academic and social support to students from pre-k to 5th grade both during after-school hours and through summer programming. It also partners with JPS to ensure college and career readiness for middle- and high-school students.

Finally, the council recognized Big Brothers Big Sisters Inc., which aims to provide one to one mentorship to children in need between the ages of 5 and 15. This organization has been in existence for over a century and works to connect admirable community members ("Bigs") to children in need of guidance and academic support. Anyone in Jackson is welcome to apply. Big Brothers Big Sisters' mission reads: "Provide children facing adversity with strong and enduring, professionally supported one-to-one relationships that change their lives for the better, forever."

"[When] there is a young person who's living in a community that is hungry, that feels like a community does not love them, does not support them, doesn't recognize them ..., it is a lot easier perpetrating harm on someone when you don't feel a [communal] connection," Mayor Lumumba responded at a Jan. 16 press conference to a question regarding the role of education in fighting violence.

Email city reporting intern Taylor Langele at [email protected] and follow him on Twitter at @taylor_langele. Read about violence solutions at jacksonfreepress.com/preventingviolence.