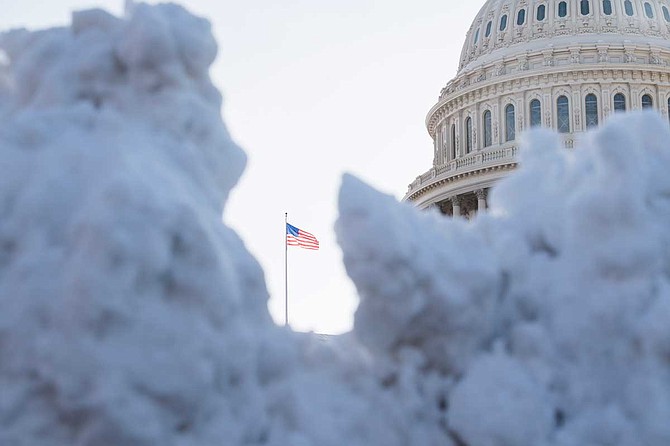 JACKSON — The ongoing federal government shutdown is doing more damage in Mississippi than in most states, an analysis finds.

Mississippi ranks eighth, according to WalletHub, thanks in part to its share of federal workers and its dependence on federal programs.

At 26 days, the government shutdown is now the longest in U.S. history. The second-longest shutdown lasted 21 days in January 1996, when President Bill Clinton struggled to make a budget deal with a Republican Congress.

WalletHub determined Mississippi's ranking after looking at all 50 states and the District of Columbia and considered in each the share of federal jobs, contract dollars per capita, the percent of families receiving food stamps, real estate as a percentage of gross product and national parks access.

At 18 percent, a higher percentage of Mississippi families receives SNAP, or food stamp, benefits than any state in the nation. The national average is 13 percent.

Earlier this month, the Mississippi Department of Health and Human Services announced that SNAP benefits for February would go out early on Jan. 17. The next SNAP payments will go out in March—if the president signs and funding bill, and the government reopens by then.

No Pay for FBI or TSA Agents; May Endanger Flying

Other federal employees not receiving pay across the state include TSA agents at airports. Nationwide, TSA agents are calling in sick, and experts say it is making air travel more dangerous.

The shutdown is affecting non-federal professionals across Mississippi, too, including realtors. Taryn Flint, a Biloxi realtor, told the Sun Herald earlier this month that she had a home sale that could not close because they needed a USDA loan guarantee.

Pelosi to Trump: Postpone State of the Union due to Shutdown

How each state ranks in terms of shutdown impact

This WalletHub graphic shows how states rank in terms of how hard the shutdown effects them. Hover over the graphic to see where a state ranks.

In December, while Republicans still controlled both chambers of Congress, President Trump began threatening to shut down the government if lawmakers would not give him funding for a border wall. In a meeting with Democratic Senate Minority Leader Chuck Schumer and then-incoming Democratic Speaker of the House Nancy Pelosi on Dec. 11, Trump said he would "be proud" to hold government operations hostage to a wall-funding ransom. In fact, he said, he would "love to see a government shutdown."

"If we don't get what we want, one way or the other ..., I will shut down the government, absolutely," Trump said.

Trump assured Schumer and Pelosi moments later he would not blame them.

"I will be the one to shut it down. I'm not going to blame you for it," he told them.

On Dec. 19, Democrats and Republicans in the Senate unanimously passed a bill to keep the government open after Vice President Mike Pence assured Senate leaders the president would sign it. Trump pulled the rug out from under Congress the next day, though, refusing to sign any bill that did not include $5 billion to build a border wall. On Dec. 22, the government shut down.

Trump also reneged on his promise to take the blame, and has since tried to rebrand the shutdown as a Pelosi-instigated "Schumer shutdown."

White House to Tenants: Try to Barter for Rent

The Office of Personnel Management, which oversees federal employees, sent them a letter late last month, suggesting that, absent paychecks, they try bartering with their landlords to make rent. Specifically, the letter suggested they offer "to perform maintenance (e.g. painting, carpentry work) in exchange for partial rent payments."

Earlier this month, Trump said he would allow the shutdown to go on for "months or years" if necessary to get border-wall funding. He also floated the idea of declaring a national emergency so he could bypass Congress and build his wall that way.

In a tweet Wednesday, U.S. Sen. Cindy Hyde-Smith, R-Miss., wrote that "resolving the shutdown will require good-faith negotiations by the Democrats," and said she supports Trump's goal of building a wall at the border. Trump supported her election bid last year, and held three Mississippi rallies with her in October and November.

The government shutdown started while Republicans controlled both houses of Congress.