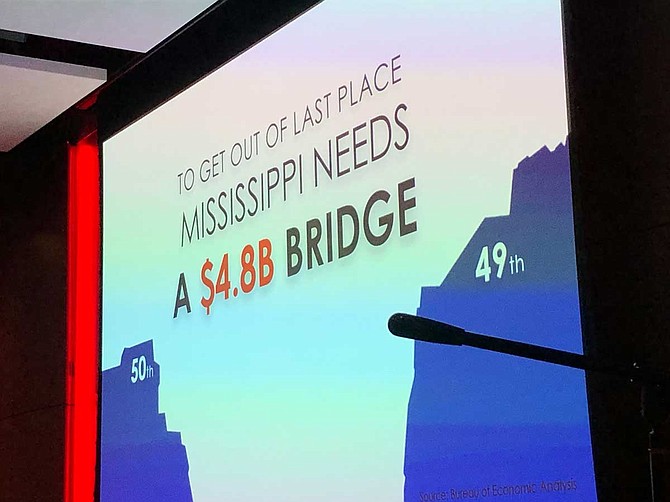 Mississippi currently ranks dead last in per capita income and needs $4.8 billion more in income per person to be able to rise to 49th place. That number breaks down to $1,600 per person. Photo by Amber Helsel.

Fifteen minutes before TEDxJackson was due to start, people were slowly trickling into the Craig H. Neilsen Auditorium at the Two Mississippi Museums. Around 9 a.m., organizers dimmed the lights, signaling that TEDx was beginning.

Previous iterations of the event commemorated areas such as Mississippi's space program and the state's bicentennial, but instead of looking at the last 200 years, this year's TEDx focused on the next 200.

Speakers talked about everything from the state flag to Mississippi's literary history to supporting the state's most underprivileged families. It was a reminder of how far we have to go, but also how far we can go, and how we can change.

A big theme of the day, besides emotional vulnerability, which many of the speakers either talked about or mentioned, was the state's negative mentality. Mississippi is at the bottom of lists such as per capita income, as Joel Bomgar illuminated in his talk, and at the top of lists for issues such as obesity. And that negativity  towards ourselves tends to eat into our everyday lives and create a defeatist attitude.

But as most speakers illustrated, we don't have to stay where we are as a state. We could move to at least 35th, moderator Maranda Joiner joked at one point, and hopefully a lot higher.

In Bomgar's talk, he talked about the state's per capita income, meaning how much each person makes. We are at the very bottom of that list in the U.S. (and have been since 1929). Data he presented show that the state needs $4.8 billion more in income to get out of last place. That sounds like a daunting number until you break that down per person, or about $1,600. Numbers like that may sound insane to children, but as my friend said to me the other day, $100 is like a dollar to many adults. We have lived long enough to know that sums such as $1,600 isn't actually that much money. It's about the average of a minor-to-moderate house repair, and a moderate car repair.

While many people may try to blame factors such as the cost of living and race, Bomgar contends, data show that the effects those things have on per capita income is negligent, so we can't blame them. What needs to happen, he believes, is people at all income levels need to make more money.

"We need big solutions that affect everyone," he said. "... Together is the only way up."

Aisha Nyandoro, the chief executive officer of Springboard to Opportunities, talked about paving a way forward through supporting the state's most vulnerable.

"Society as a whole flourishes when we invest in our most vulnerable," she said. In particular, she talked about supporting black mothers and their families. In her speech, she talked about Springboard's newest program, the Magnolia Mother's Trust, which gives 15 families an extra $1,000 a month for a year, doubling the families' incomes. The mothers involved also get leadership opportunities, coaching, counseling and more.

Springboard's website says about the program: "If we offer our families a little bit of breathing room, will they be able to dream about something a little bigger? If  financial survival is not always top of mind, would community leadership and activism become a real possibility?"

Nyandoro said at TEDx: "For all of our abilities to analyze and critique and pick apart, we have become grounded in 'what ifs,' rather than what could be. If my granny (civil-rights activist L.C. Dorsey) had focused only on the cotton fields right before her eyes, where would I be? I wouldn't be on this stage."

TEDx speakers such as Nyandoro offered concrete solutions to a problem, while others such as Bomgar may have not offered a specific solution, but they did plant ideas. They showed us what is possible and what we as a whole should focus on. Mississippi can only come out of last place if we as a people make it happen. And as Bomgar said, that only happens if we rise together

For Nyandoro, it's about supporting the vulnerable. For Millsaps College professor Ann Phelps, it's about reclaiming spiritual spaces. For Citizen Health Chief Executive Officer Brennan Hodge, it's about finding a way to fix the broken health-care system.

Managing Editor Amber Helsel is a writer, storyteller and snack eater by day, and an artist by night. She's currently obsessed with making resin jewelry and watching episodes of "The Great British Baking Show." Send story ideas to [email protected].