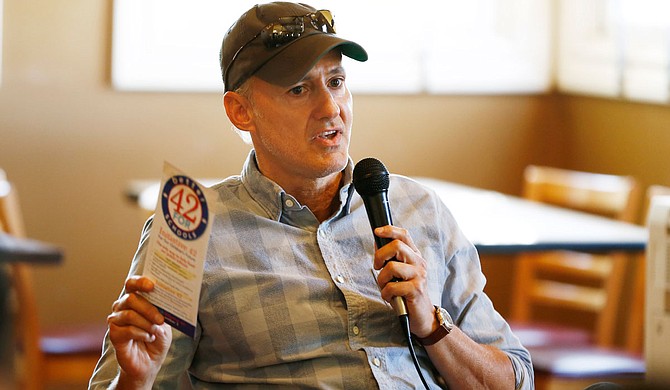 When the votes from Mississippi's elections were finally tallied, the results were damning for the state's Democratic party. Republicans made a clean sweep of statewide offices, and retained a supermajority in the Mississippi Senate and House of Representatives. While there have been no shortage of opinions on the Democratic Party's challenges going forward, a good deal of them present race as an obstacle for the party to overcome.

A recent interview with Jim Hood's campaign manager and political strategist Michael Rejebian asked to comment on the Hood campaign's unsuccessful strategy of trying to thread a needle between a black electorate that comprises the majority of the Democratic base and more moderate white voters:

"If we missed it to the right, then we were alienating people to the left," Rejebian said. "If we missed it to the left, then we were losing moderates that we needed to the right. ...This wasn't something that we just did one time. We were threading that needle every single day ... because we knew at the beginning of this campaign that our base was not enough to win us this campaign. We had to have moderate white voters. And to do that you have to do certain things. You have to appeal to them in certain ways that you might not appeal to your base voters."

In presenting the challenges as "threading a needle" between black and white voters, Rejebian and others are guilty of what Karen and Barbara Fields term "racecraft": a system of beliefs that imbue race with a kind of phantasmal power to determine people's ideas, habits and preferences. In Rejebian's quote, race is imagined as a determinant of political action. Subsequent strategy then conjures some voters as liberal because they are black, while others are conjured as moderate because they are white. Through racecraft, "black" and "white" serve as a verbal sleight of hand that converts an economic problem into a demographic one.

Yet while poverty is a problem all too familiar to many Mississippians, it is more prevalent among black people than white. While the poverty rate for whites in this state is just over 13%, it is nearly 34% for blacks. Meanwhile, the median black household income in Mississippi is just 54% of the median white household's income.

When Rejebian states that in order to win over moderate white voters campaigns "have to appeal to them in certain ways that you might not appeal to your base voters," he and others who share that belief are claiming that one's politics are matters of race rather than material circumstances.

To be sure, some whites more readily identify with members of their own race than they do members of their own economic position. Yet to accept without question that white working-class voters have more in common with whites at the top of the income distribution than they do with black voters who share similar economic standing is to treat racial fantasy as racial destiny, and to confuse race with racism.

In his 1935 "Black Reconstruction in America," the sociologist W.E.B. Du Bois describes how this fantasy of racial solidarity took shape, and its devastating consequences for blacks and white people alike. Following Emancipation, former plantation owners seeking to maintain their dominant status forged an alliance with white workers. Through this alliance, the planter class was able to maintain its stronghold over capital.

Meanwhile, for white workers, the alliance guaranteed dominance over blacks through a series of economic and political maneuvers that reduced black labor as close as possible to a condition of unlimited exploitation.

The goal, as a former governor and one of the architects of Mississippi apartheid, James K. Vardaman, put it, was "to eliminate the nigger from politics"--by force, by economic intimidation, and by political skullduggery while at the same time solidifying whites' superior social and political standing. Today, propaganda casts black political interests as narrow, kin-based and unable to save them, while maintaining that the charity and good intentions of whites in positions of power just might.

And what of the white working-class who tethered their fate to the wealthy elite? What they have lacked in actual economic gains, they have more than made up for in the "wages of whiteness": those social and psychological wages that come from having their group's dominance codified and enforced through law and custom.

As long as white workers "could be induced to prefer poverty to equality with the Negro," Du Bois writes, economic solidarity was made impossible. As movements for civil and political rights resulted in legislative victories for blacks, whites became ever more certain that each step in the slow march toward integrated schooling, the franchise, and fair housing was a direct threat to their racial rights.

Today, the majority of Mississippians--black and white--face economic uncertainty. All available data suggest black and white workers alike would benefit from a living wage, universal healthcare, universal pre-K, the abolishment of right-to-work, the active support for unions and collective bargaining, and a state-wide bill for tenants' rights. Yet Democratic candidates in the last election offered little more than milquetoast reforms that do little for the life chances of those with the least opportunities.

The future of Mississippi's Democratic Party depends upon its willingness to embrace a platform that premises its politics upon shared economic and racial injustice, rather than trying to thread a needle through imagined racial differences.

James M. Thomas (JT) is an associate professor of sociology at the University of Mississippi. He is the author of four books and more than 20 peer-reviewed journal articles, book chapters, and other essays on the causes and consequences of racism in America and abroad. JT can be reached at [email protected], or on Twitter at @Insurgent_Prof.