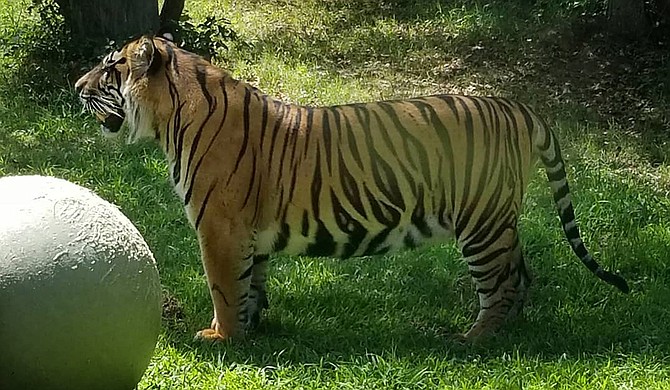 Demolition of outdated buildings is underway at the Jackson Zoo as part of renovation requirements the City must meet before the facility can reopen. City officials said that they hope to replace a former discovery zone with a contact area where visitors can interact with animals. Photo courtesy Jackson Zoo

The Jackson City Council voted last week to approve demolition of outdated zoo buildings that city officials say they hope to transform into a contact area for animals; the conversion of an unused former daycare building into a Virden Addition community center; and construction of Jackson's first walking and biking trail.

Three Jackson Zoo buildings, which were part of its old "discovery zone," are undergoing demolition while the zoo is closed, a decision the council approved last week. The members also voted to authorize the City to apply for $351,714.78 in state grant money through the Mississippi Department of Finance and Administration to pay for zoo repairs.

City of Jackson Parks and Recreation Director Ison B. Harris confirmed that the demolition is already halfway complete, with a partner organization carrying out the demolition free of charge. He said it would take 45 to 60 days to complete the project after the council's approval to move forward.

The demolition is the first step in a long list of items that the City must address before the zoo can reopen, Harris said. Part of that list is transforming the old discovery zone into an animal contact area.

"The idea is to tear it down, and then hopefully we'll be able to make another contact zoo, where you'll be able to have animals that people can actually touch," Harris said.

Harris confirmed that the animals are in good shape as the zoo remains closed to the public. "Animals are doing well. We're feeding them. They're getting all the food and everything that they need to survive," he said.

An abandoned building that formerly housed the Virden Early Childhood Development Center will turn into a community center. The Jackson-based Better Men Society, a mentoring group that serves young people in the Virden Addition, will oversee programs at the new center.

The daycare shuttered its doors in 2016 after the council voted to close it on the grounds that it would save the City $301,000. Children who attended the Virden Addition daycare transferred to another daycare in west Jackson.

Parks and Recreation Director Harris, who brought the proposal before the council during its Nov. 25 work session, said the unoccupied building is currently undergoing renovations. He said that it could be ready for use within one month.

When renovations are complete, the Better Men Society intends to sign a lease to use the building as a community center, offering mentoring and enrichment programs to young people.

Hemphill Construction Company will begin work on the 10-foot wide, 2.5-mile multi-use "Museum-to-Market Trail" in spring 2020 with completion as early as next fall. The Jackson-based engineering firm Neel-Schaffer Inc. will handle the construction, engineering and inspection services for the project.

The trail will begin on Jefferson Street at the Two Museums and end at the Mississippi Museum of Natural Science off Highland Drive. It will incorporate an old rail line.

"This is a great development moving forward for Jackson," Ward 1 Councilman Ashby Foote said at the council's Nov. 25 work session.

"About 10 years ago ... (we) went to Hattiesburg and saw what was possible and what could be," Lindsay said to members of the project. "I just cannot believe we are finally here, gentlemen. I thank you so very much for everything. You've bled this trail."

The council authorized the City to receive $450,000 in private donations to cover the remaining costs of the $1.5-million construction project.

Once the trail is ready, the goal is to expand it into a larger, regional trail.

"(The) long-term plan is to use this as a start to grow the bike path system," said Robert Lee, an engineer with the City of Jackson. "If you go to Hattiesburg, if you go to the Tanglewood Trail in North Mississippi, they started with something and they grew it. And now they have 40-mile bike paths going through at least 3 counties. And they're wonderful."

City officials said they are also discussing a bike-rental program.