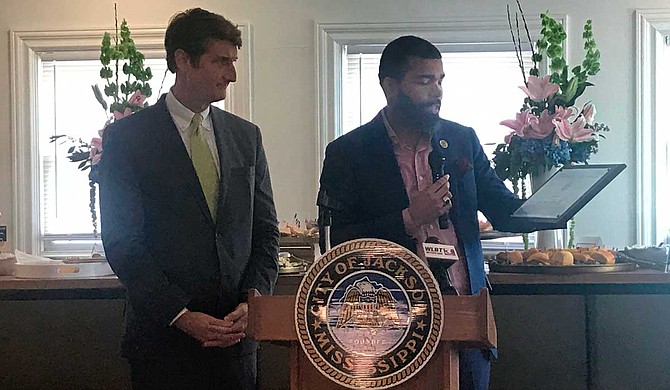 Mayor Chokwe A. Lumumba recognizes the Refill Cafe Initiative with a certificate of appreciation for its commitment to economic growth and vitality, he said, at the Refill Cafe opening ceremony on Aug. 26. Jeff Good, co-chairman of Refill Jackson, accepts the plaque on the program's behalf. Photo by Aliyah Veal

JACKSON—When Lee Harper moved to Jackson with her husband, she did not know what she had gotten herself into, but she soon became attached to the community, she told the audience at the opening of Refill Cafe on Aug. 26. The business' space is the former location of Koinonia Coffeehouse, which Harper opened with her husband in 2008. Harper is not connected to the Refill Cafe project.

"There's something about this community that you find different, and it has a way of putting its tentacles into you, and you want it to be more than it is. You know that it can be more. That's what I found when I got here," Harper said.

Jacksonians, businesspeople, cafe staff and local leaders filled Refill Cafe to capacity in celebration of the opening of the city's newest local eatery. After months of renovations, the cafe is finally open to serve the Jackson community sandwiches, soups and blue plates Monday through Friday from 11 a.m. to 2 p.m.

The Refill Cafe will serve lunch daily and give on-site job training for those who are enrolled in the Refill Jackson Initiative. The initiative is a workforce training program for 18- and 24-year-olds that teaches them soft skills, financial literacy, resume-building, and other essential skills to help them obtain and maintain a job.

Refill Cafe proves that working together works, said Jeff Good, co-chairman of Refill Jackson Initiative. This week marks week five for the members enrolled in the program and, next week, they begin training in the cafe.

In a speech during the opening ceremony, Good thanked various businesses and donors for their contributions to the restaurant and program. Then, 12 male Mississippi Department of Corrections inmates, who helped in the construction process of the cafe, entered the ceremony and interrupted Good's speech. The audience applauded as the men made their way to the podium.

"When we found out what we were doing it for, it meant a lot more. A lot of people don't give (other) people a chance," one of them said. "What you did here is a blessing, and I hope it continues, and everything you touch is a blessing."

Mayor Chokwe A. Lumumba talked about creating a "dignity economy," which he said would recognize the inherent worth of every single person, including the "surplus" of people whom the current economy has cast aside.

"From the young people that this particular establishment will be training each and every day, to the people that came here just a moment ago that worked on this project, (to) those individuals that are incarcerated at this moment—and we look forward to them being returning citizens working each and everyday to build this city—this is what this project is about," Lumumba said.

More than a decade ago, while Harper was traveling to raise money for a nonprofit she worked with at the time, she saw how other cities were making sure their communities were not forgotten, she said. That gave her the idea to open a coffee house in the middle of west Jackson.

"It was crazy. There were a couple of homeless people that told me it was crazy," Harper said. "I knew that one of the things we could do was to bring attention and start to bring people into this neighborhood (because) they may have some resources that we didn't have."

Harper ran Koinonia, whose name was derived from a Greek word meaning "fellowship," for eight years before closing its doors in 2016. The one thing she learned from running a business, she said, is that success does not just come from money; it also includes the social benefit for the community.

"Listening to what Refill Cafe is doing and what Jeff and the team are doing, it's rethinking how we are to approach things that challenge us the most. As much as they have given and are going to give in the future, the success of Refill Cafe is not on Jeff or his team, but it's on you. It's on us," she said, referring to Jackson residents.