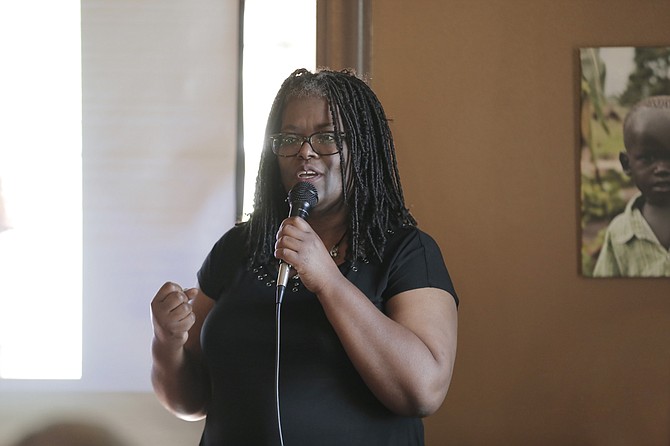 Lee Harper, owner of Koinonia Coffee House, announces both the end of the current incarnation of the community gathering spot, promising a rebirth with a new owner in the next couple of months. Photo by Imani Khayyam.

JACKSON — Koinonia Coffee House closes at the end of the month, owner Lee Harper announced this morning during the weekly Friday Forum, promising that in its place a whole new stage of community development will take its place for west Jackson.

Harper, a Jackson resident since 1970, said she would explore her options for the future, perhaps build a home in the area. The coffee shop, as a community gathering place and forum for ideas, will not disappear, she promised, explaining that she was in talks to transfer ownership to a new business partner after she closes at the end of the month.

"When you put a period behind something, and say generally, this is the decision, that's the time when something starts to happen," Harper said. "And in our case something has started to happen."

She said she couldn't disclose any of the details of the deal, or with whom she has been discussing the future of the business, but that it would hold with the ideas she and her business partner Alexis Spencer-Byers set out with over eight years ago.

"All I can say is that you are going to love it," Harper said. "Since that time it has been snowballing into something really great. The people that are involved in it know at the heart of it what it is, and secondly they are going to take it even farther with their dreams."

She pulled up an email, reading the message from the anonymous soon-to-be owner.

"Koinonia is not dying; it is morphing into a new being and will emerge from the shell," Harper read from an email from the new mystery owner. "Just to hear that gives you just an idea of what is going to come next. I am excited."

Spencer-Byers has since moved out to Los Angeles and Skyped in for the announcement.

"Part of our hope for Koinonia was that it would be a seed or a catalyst where other similar ventures in communities where people might be slow to invest, or start a business," Spencer-Byers said.

She moved back to California, to Los Angeles, where she said she met a young man with a vision to create a market in south central L.A. After weeks of informal meetings, she said that the young man asked her to be a part of the project, to leverage her experience to secure the loans necessary.

"And three months ago With Love Cafe and Market opened in Los Angeles. I want all of y'all to know that there are people in south Los Angeles who have access to healthy food, who have a beautiful place to gather, and to eat and converse and enjoy creative events, in part, because Koinonia existed."

The Friday Forums will continue every Friday at 9 a.m., but Harper said she was unsure whether there would be hot food served. The last day for the only coffee house in west Jackson is the end of this month.