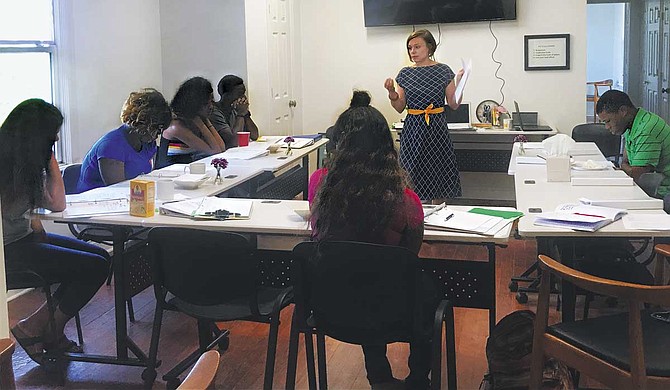 The Refill Jackson Initiative’s Vice President of Training and Education Jordan Butler talks on Aug. 8 with Refill Jackson students about the meaning of open-mindedness inside the soon-opening Refill Café in west Jackson. Photo by Aliyah Veal

Common and John Legend's Oscar-winning song "Glory" filled the classroom above the Refill Cafe on Aug. 8 as Jordan Butler waited for more students to arrive. It was week two of The Refill Jackson Initiative, a workforce training program that supports Jackson's vulnerable young adults between the ages of 18 and 24. The program teaches participants soft skills that are essential for getting and keeping a job, as well as on-site job training through working in the cafe.

The cafe, which at one point was yellow, is now white with a wraparound patio for outdoor seating and a wheelchair ramp for those who cannot take the stairs. Construction workers pounded hammers to finish renovations on the cafe on Adams Street as students engaged in their daily exercise on Aug. 8.

Refill Cafe will soon serve lunch weekly to the surrounding Jackson community. The restaurant will also act as a job training site for members enrolled in the program. Students will obtain job experience by working at the restaurant and get paid. Refill Jackson is one of many across the country including the Cafe Reconcile program in New Orleans.

When the cafe opens on Aug. 26, restaurant manager Sharna Shields, who has more than 10 years of restaurant experience, will teach student-workers how to properly cut food, and about cross-contamination, food allergies and hygiene, she said.

"Every single member gets to rotate stations, so everyone will know what it's like to be a dishwasher, to be on the sandwich station, to be a cashier, to bus the tables. Restaurant work is very humbling, in my opinion," Shields said.

"Nine times out of 10, whatever you learn in the restaurant you can take anywhere," Shields said. "We're not making restaurant workers. We're making employees."

Before the students start the actual restaurant work, though, they are spending five weeks learning skills they need to succeed in life and in the working world.

"They will spend five weeks in Refill Cafe applying some of the things they learned in the classroom to a real-life work setting," Stanfield explained.

On Aug. 8, as the hammering faded into the background, Butler asked students to define "open-mindedness" in their own words. Elizabeth Garcia said she thinks open-mindedness means a willingness to accept other people's ways of thinking. "If you're close-minded, you're not going to even consider it," she said.

Kyra Tolston said open-mindedness means getting yourself out of the same rut. She recalled seeing a picture online that fit her definition of the word. "It was someone standing on two sides. To one (person), it looks like a 6, and to another (person) it looks like a 9. You stand at different angles and see different things," Tolston said of the picture.

Butler asked the class what quotes resonated with them the most. Da'Quan Myatt said he agreed with Frank Zappa's words: "A mind is like a parachute. It doesn't work if it isn't open."

Tolston said the Refill Jackson program is an example of them being open-minded. "If we weren't open-minded to getting new solutions to the problems we have, we wouldn't be here today," she said.

After Refill students came back from a brief break, they rolled into the second session: their Smart Start portfolio. Butler said the Smart Start curriculum is a workforce training program that is offered through the Community College Board and community-college system in Mississippi.

"On the other end of the 45-hour course, you get a three-hour college credit course. The course is also a prerequisite for many of the adult education programs, whether that is completing your high-school equivalency or going into any kind of certification program," Butler said.

Following graduation, students will receive a SMART Start certificate, recognized statewide, that gives them the ability to put the program on their resumes.

"What are the top three things you need to be career ready?" Butler asked the class.

Myatt said you have to know what your interests are. "If you don't like it, you don't want to do it," he said.

Butler said students should not only find a job that matches their interest, but one that will also be in high demand, which is the second need.

"What's the third need?" she asked.

"Get an idea of the type of job you will need to help support yourself and your family," Tolston said.

The lesson of the day focused on 16 career clusters, groups of professions that share a common interest, such as architecture and construction; agriculture, food, and natural resources; and finance.

Butler assigned students the task of searching O-Net Online, a database of occupational information, to find their top two career clusters and then fill out a worksheet to determine what jobs match their interests.

"The thing that's really tricky, and this is true for all 18- to 24-year-olds, is figuring out what you're interested in. Generally speaking, (this) takes experience. It's a starting place for thinking about what type of fields they might be drawn towards," Butler said.

The students come from various backgrounds and levels of education and represent a wide variety of interests and skill sets, she added. "They are caring and insightful, and they are incredibly hardworking, and they're curious. They're budding with potential and thrive in a positive environment where they are given feedback, support, and opportunities where they can be successful and show leadership."

"It's not how it was, at least, for my parents, where you finish school, you might go to college and then you sort of settle into that career for 30 years to get your pension," Stanfield told the audience at the Refill Cafe's Friday Forum on Aug. 2.

Stanfield said people are now moving around to different companies for only one, two or four years, especially vulnerable populations who might lack support networks, skills and resources.

"We offer to fill in those gaps that vulnerable populations may be experiencing," Stanfield said.

The Refill Jackson program started July 29 and recruited 10 young adults—five women and five men. After graduating from the program in early October, Refill will provide members 10 months of follow-up support.

Career Coordinator Amber Parker said she and Vice President of Social Services Betsy Smith will continue talking to members to address any barriers they are facing in trying to find full-time employment, staying employed or any personal issues they might face.

Parker books guest speakers to expose the members to different industries and, after graduation, she will help connect them to internships. "It's always good to have those internships to help them figure out what they want to do or sometimes what they don't want to do," she said.

The internship lasts four months, and members are able to job shadow and get entry-level work experience.

'That Type Of Change'

Da'Quan Myatt, whose career goal is in culinary arts, said he is excited to start working inside the cafe. He learned how to cook from his mom, and he eventually wants to go to culinary school and then open his own restaurant.

"I like to work with my hands. I worked in a restaurant, but not a cafe. I think at the end, it's going to be all worth it. All the training we do," Myatt told the Jackson Free Press.

"I feel the same way. I'm ready to work. I'm very excited because I never worked in a cafe before, so that's something I would like to experience," said Angalec Felton, who is interested in cosmetology.

Morning discussion transitioned to a conversation less about word concepts as students began to share their personal growth, future plans and thoughts about the program. Participants said they've learned lessons like accountability, leadership, standing firm and how to work in a group.

Martin Maberry, who is interested in working in construction, said he keeps coming back to the program because the staff cares, and they try to help him become a better person. "Where I grew up, people don't really care. People always trying to down you. They don't want to see you make it out," he said.

"I come here everyday because I can't learn anything without being in the classroom. I feel like this is a safe place. It's teaches me what to do and what not to do in the workplace. It also teaches me skills that I might need in life. I learn new words every day. It's positivity," Felton said.

The students have grown closer as friends and family, and they learn each other's flaws and pasts.

Jatavius Harris, who wants to be a shoe salesman, said his fellow classmates help him out as much as they can.

"I ride the bus with you (Myatt), you (Felton) make sure that I'm doing good, and I'm here and he (Maberry) helped me when I finally decided that I was fed up with this place. He got me to come back and finish. Not too many people would do that for me," Harris said.

Myatt said he sees himself doing very well in life, while Felton said she will continue to push herself on the road to success. "I feel like I'm going to be a better person. I think I'm going to feel bigger," she said.

"Actions speak way louder than words. I just want to leave here, come back five years from now, if they're still here, and come in like, 'Whoa, that's a whole different person. That's not the same kid that was in my classroom.' That type of change," Maberry said.

The grand opening for the Refill Cafe is Aug. 26 at 11:30 am. The following day, the cafe will be open for its normal business hours from 11 a.m. to 2 p.m. Monday-Friday. Menu items will include soups, salads, sandwiches and blue plates, and meals should cost customers no more than $15, Shields said.