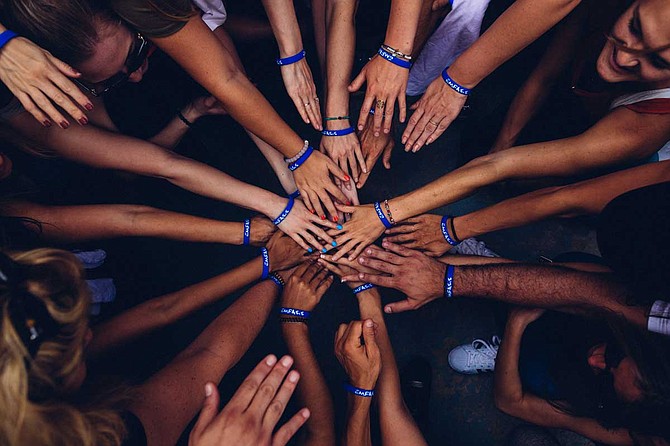 “I think part of it lies in learning about other people, and realizing that all of us are chasing the same thing anyway. We all want to feel wanted and secure and like we belong, and we’re all searching for a purpose.” Photo by Perry Grone on Unsplash

Last Saturday, I attended a Mississippi Book Festival panel called "Enneagram: How We See and Why It Matters." For those who don't know what the enneagram is, it's comprised of nine numbers that essentially tell us how and why we see the world the way we do. I'm a type 5, so basically, I'm constantly in search of information and tend to be pretty aloof.

However, during the panel at the book festival, the panelists didn't talk much about the enneagram itself. Like the title suggested, panelists Suzanne Stabile and Brian McLaren, and moderator George Patton, used it to frame some of the stuff that's happening in the world, especially in concerns of the Christian church, as enneagram has a bit of a spiritual component.

The thing that stuck out most to me at the panel was when they talked about the idea of belonging, something we should all be pondering about right now with everything that's happening in the world.

A couple of weeks ago, Immigration and Customs Enforcement, or ICE, agents raided plants in Mississippi, detaining nearly 700 immigrants, some of whom had children who just started school that day, and without notifying schools or  others about the need to care for the kids, as Ashton Pittman reports on page 6.

Since that moment, I've been thinking a lot about all of us just wanting a place to belong. We all want to feel wanted and needed and secure. I know I do. It's the  reason I do things like linger way longer than I should after church. And I bet you dollars that members of the immigrant community also just want to belong. It's really not a hard concept, but it's one we get wrong so often as humans.

At one point in the panel, moderator Patton asked author Stabile to comment on the way the Christian church tends to treat the LGBT community.

"I fear that we are feeling like we can't belong unless somebody doesn't, and so I think we've assigned a new group of people to fill that role for us collectively," Stabile said.

Then, the panelists talked about how immigrants are now becoming that group. There's been so much hate and devisiveness over this issue. As a side note: If you're more worried about people breaking a law than you are of their well-being, you've seriously lost touch with your humanity.

Near the end of the panel, Stabile turned to McLaren and asked him, "Brian, what makes you hopeful?"

There's a type of hopeful, he said, where a person believes that everything will be OK no matter what. Then, there's another kind of hope where the person recognizes that things are already a mess, so there's no use fighting it. But right in the middle, he said, is a place where he recognizes that things could get better or worse, but he has a role to play either way.

Amid the horrible news that kept breaking around the ICE raids, there was some hope, as always. Yes, there was a lot of deserved condemnation of what was  happening, but people were also asking how they could help. Churches and organizations did food and supply drives, and a bunch of people stepped up to help, from lawyers helping place kids and reunite families to people providing shelter. Our most-read story from the last two weeks is the one with resources.

It was a sign of hope for me in a time when it seems that we've just lost touch with each other. In our quest for belonging, we've forgotten that others also want to belong. We've also forgotten that love is greater than hate.

There's something else I took from the panel. McLaren finds hope in science, he said. "If you go to your basic physics class, and learn about cosmology and the origin of the universe, it basically tells you that 14 billion years ago, there was a hot mess, and now we have Mozart and Bach and 'Weird Al' Yankovic and Wanda Sykes and  Rembrandt and Bruce Springsteen, and you think, 'From a hot mess, the way the universe works, beauty can still come.' I think that's part of what God is in the  universe. God is the creator, a loving,  imaginative, creative force that out of a hot mess can bring beauty."

That notion also gives me hope that beauty can come from complete chaos. Earlier this year, some people came and cut my entire yard—front and back. My bamboo and weeds had grown out of control, but they came and spent a couple of hours making it look like a backyard again. From that hot mess came beauty. The same thing happened when my mom and sister helped me clean my house on the Fourth of July. From a hot mess came beauty, thanks to the kindness of friends and family.

I don't claim to know how to solve the world's problems. I can barely even solve my own. But I think part of it lies in  learning about other people, and realizing that all of us are chasing the same thing anyway. We all want to feel wanted and secure and like we belong, and we're all searching for a purpose. The world may be chaotic, but instead of descending into that place where we shrug our shoulders and say "I can't stop this," we could reach out to help someone else up.