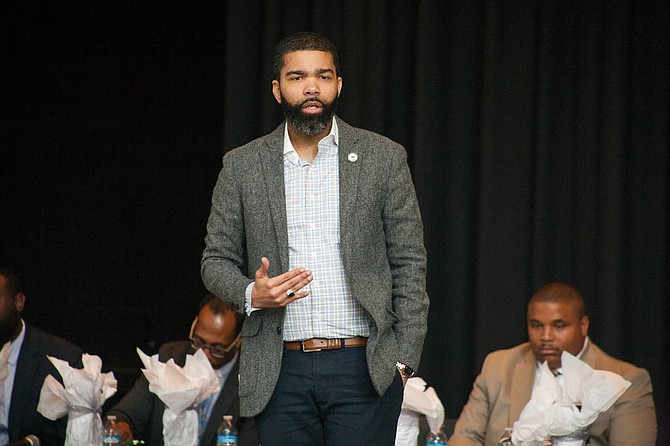 At a "Man to Man" panel at Bailey APAC Middle School, Mayor Chokwe Antar Lumumba and a panel of city leaders and professionals talked to the seventh- and eighth-grade boys about the importance of education and staying on track on April 13, 2018. Photo by Stephen Wilson.

JACKSON — While the middle-school girls of Bailey APAC were away on a girls-only science-related field trip on Friday, the boys were invited into the auditorium to engage with a panel of city leaders and professionals. In the gray, concrete auditorium, the men encouraged the boys to find what they love in school and stay on the right track.

Mayor Chokwe Antar Lumumba introduced himself first, prefacing his remarks by saying that the girls should be jealous about the forthcoming conversation.

"I am a JPS (Jackson Public Schools) product myself, so I know what capacities you have, I know the struggles that you have, I know the issues that JPS students see each and every day," Lumumba said. "So we are trying to set a new path where we can change those dynamics."

The mayor talked about being distracted in school until something clicked for him.

"There were a number of things that I was interested in," Lumumba said. "I cannot tell you I started out where you were just in love with school. I was a daydreamer.... I played basketball, and I thought about being a basketball player, and I'm still waiting on them to call me up now."

Lumumba credited his late parents and teachers who kept him close to the process of learning until he realized how important doing well in school was to his goals. The mayor said his father reminded him after he hid a report card for two weeks that change is inevitable—he would just have to decide whether he wanted to make progress or to fall behind.

Ward 2 Councilman Melvin Priester Jr. offered another perspective as a self-proclaimed "nerd" who always liked reading, and found himself bullied in JPS schools because of it.

"I just want to say a couple words to the people being bullied," Priester said, offering "practical advice" for dealing with those situations.

"Bullies tend to bully you about things that are actually positive about yourself," he added.

Jackson Police Department Deputy Chief Tyrone Buckley was candid about his academic path, which led him into law enforcement after he finished college because he did not have a backup plan for not making it into the National Football League, he said. Buckley also warned the boys about how bullying or following a crowd can have legal consequences if things get out of hand.

"Bullies breed other things," Buckley said, adding later that "if you want to be a bully, you might find yourself in the criminal-justice system. ... I know in the 8th grade it might feel like 'I'm just having fun, and I'm just playing,' but trust me, your plan can escalate."

It's never a true Jackson event unless someone brings up potholes, as a boy in the crowd did.

"I had to ask, why are there so many potholes?" a middle schooler in the audience asked, his classmates erupting into laughter.

Priester took the question because the mayor had to leave early, and used the City's crumbling infrastructure as an analogy for staying on top of schoolwork.

"The streets are a perfect example for what happens when you fail to plan," Priester said. "[T]he potholes are just like anything else in life. In school, you get an assignment, and you know it's due an in a month, and if you just do a little bit each day, you can get a great grade.

"But if you don't do a little bit each day, when it comes time to turn in that thing you knew a month ago you had to do, you'll turn in messed-up homework. It's the same thing with the potholes. We did not do maintenance over time, and now we're trying to catch up. ... The lesson there is don't let the little things pile up."