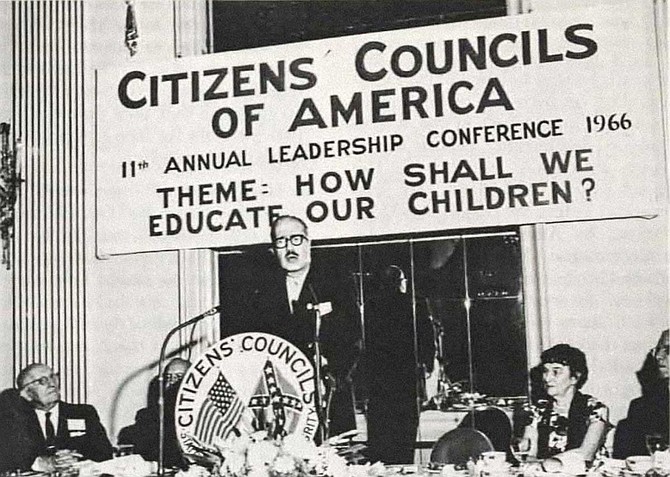 JACKSON — Stephanie Rolph was a graduate student at Mississippi State University in the mid-2000s when she found a collection of reel-to-reel audio recordings of the Citizens Forum, a broadcast once helmed by the segregationist Citizens Council.

She flipped through the accompanying index cards that described each episode and noticed a number of high-profile guests, including former U.S. Sen. Jim Eastland, a Mississippi Dixiecrat; former Mississippi Gov. John Bell Williams; and former Mississippi Gov. Ross Barnett. On those tapes, the state's old leaders often revel in their opposition to civil rights and support for segregation, revealing much about Mississippi's political culture in the tumultuous years of the 1950s and 1960s.

In one recording, Williams, who was then a Democratic congressman, calls the Civil Rights Act "the most monstrous piece of tyrannical legislation ever considered by Congress." In another, Barnett, who was no longer governor at the time, claims communists are behind the civil rights movement.

"This was our first attempt to digitize anything from this collection, so there was nothing online before now," Stephen Cunetto, associate dean of MSU Libraries, told the Jackson Free Press on Wednesday.

Until Rolph came along, researchers had sparingly used the recordings, if at all, Rolph told the Jackson Free Press Thursday morning. She began transcribing them in 2006, typing away while listening to the old machine on a pair of headphones, assisted by MSU's archivist, who would load each successive reel. About a year and a half later, she was done.

"Halfway through the transcription process, I told (the archivist) that once they were done, I would donate them to the library," Rolph said.

She followed through. Years later, in 2017, Rolph wrote a letter to help MSU Libraries obtain a $25,000 grant from the Council on Library and Information Resources to get the tapes digitized.

The recordings served as the "foundation" for her dissertation, Rolph said on Thursday. Last year, she also published a book on the Citizens' Council called, "Resisting Equality: The Citizens' Council, 1954-1989" (LSU Press, 2018, $48.00).

Rolph said WLBT first broadcast The Citizens Forum as a television program in Jackson, where the Council was based, in 1957. Later, the Council switched to a radio format and began broadcasting out of Washington D.C., using congressional studios with the help of people like Eastland. From there, the Council was able to broadcast to several southern states and was also able to procure interviews with senators, congressmen and governors that they could not get in their Mississippi studio.

MSU archivist Jessica Perkins Smith told the Jackson Free Press on Thursday that they chose to prioritize getting the Citizens Forum collection digitized, not only because researchers prize their civil-rights collections, but because time was running out for many of the recordings; some of the tapes snapped while researchers at the Northeast Document Conservation Center, who handled the digitization process, examined them.

"The tapes weren't accessible, and while we had the equipment to listen to them on, some of them were falling apart, and once they were examined, it became clear that they really were degrading," Perkins Smith said.

MSU Libraries obtained the grant. The collection, though, includes more than 400 tapes. The $25,000 grant was just enough to digitize about 270 of them, so Perkins Smith had to select which ones were the most important. She prioritized taped interviews with Mississippians. The NEDCC used what they call a "minimal touch" technology to digitize the tapes while causing as little additional wear as possible, and returned them to MSU on a harddrive.

Perkins Smith said she is excited about what the digitized tapes will offer researchers. Listening to them, she says, is a different experience from reading transcripts. At the beginning of most of the recordings, she points out, listeners can hear "Dixie" playing as an intro to the program.

On the tapes, she said, are discussions of topics that are still pertinent today, like voting rights, the power of the Supreme Court, education and civil rights.

"So much has been written about civil rights and about the Jim Crow era in Mississippi," Perkins Smith said. "But these tapes show you not only what segregationists were thinking, but what conservatives were talking about in the 1960s."

Throughout the 1960s and into the 1970s, the Citizens Council fought efforts to desegregate at every turn. After the Supreme Court ordered the integration of public schools, they set up and helped fund several private, all-white academies in Mississippi. Current Gov. Phil Bryant attended and graduated from one of them: Council McCluer High School, which is now Hillcrest Christian School, in Jackson.

Perkins Smith and Cunetto said they hope to eventually obtain the funds needed to digitize the rest of the tapes in the collection, too. The collection is available online at lib.msstate.edu.

Since the 1990s, several Mississippi politicians, including former Gov. Haley Barbour and current U.S. Sen. Roger Wicker, have attended rallies held by the Council of Conservative Citizens, an offshoot of the Citizens Council. Both organizations espoused "scientific racism," the erroneous belief that black people are mentally and biologically inferior to white people. The original Citizens Council shut its doors in 1989.