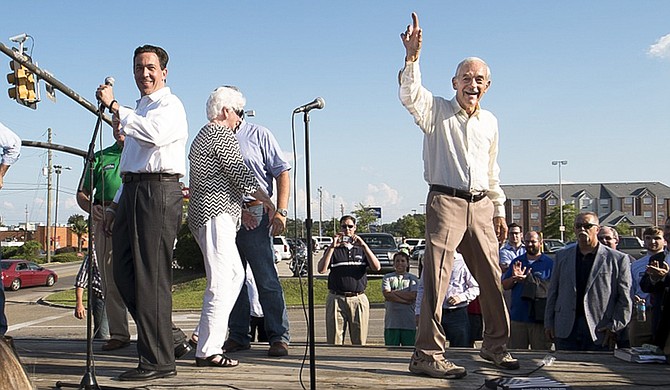 Former Texas Congressman Ron Paul endorsed Mississippi State Sen. Chris McDaniel in his 2014 bid for U.S. Senate at a rally in Hattiesburg, Miss. Paul endorsed him again in his 2018 bid on Sept. 19. Photo by Ashton Pittman.

"Conservatives who want more liberty and less government should get behind Chris McDaniel in Mississippi," said Paul, an icon among right wing libertarians, who also endorsed McDaniel in his first bid for U.S. Senate in 2014.

McDaniel praised Paul for having "inspired so many Americans to get involved in politics and to engage the system."

"Dr. Paul is a champion for civil liberties and opponent of government overreach and out-of-control spending, and I'm very excitred to have his endorsement in our fight for liberty in Mississippi," McDaniel said.

A History of Controversy

Like McDaniel—who spent the past week warding off criticisms that he insulted black Mississippians in an episode of MSNBC's Morning Joe last week—Paul is no stranger to race-related controversies.

When Paul ran for the Republican nomination for president in 2008, old newsletters from the late 1980s and early 1990s issued under his name resurfaced. "I think we can safely assume that 95 percent of the black males in (DC) are semi-criminal or entirely criminal," one newsletter read; "Order was only restored in L.A. when it came time for the blacks to pick up their welfare checks," another read; "Homosexuals, if admitted, should be put in a special category and not allowed in close physical contact with heterosexuals" and gay AIDS patients "enjoy the attention and pity that comes with being sick," read others.

As a candidate for the Republican nomination again in 2011, Paul drew fire after saying he would have voted against the 1964 Civil Rights Act had he been in Congress at the time. In Paul's view, government shouldn't force businesses to not discriminate on the basis of race; people would simply choose not to patronize such a discriminatory establishment, he argues.

Paul, the father of Republican Sen. Rand Paul of Kentucky, is a frequent guest on Russia Today, the Kremlin's English-language propaganda network. In a July apperance, Paul called Special Counsel Robert Mueller's investigation into Russia's attacks on U.S. election systems a "propaganda stunt" and said the media is "wrong" to "cast Russia as an enemy."

Mississippi's U.S. Senate special election is on Nov. 6, 2018, the same day as the national midterms. Mississippi's other U.S. Senate seat and House seats in each of the state's four congressional districts will also be on the ballot. Polls in Mississippi are open from 7 a.m. to 7 p.m.