Trump Mocked Sessions as 'Dumb Southerner' and 'Retarded,' Per Woodward 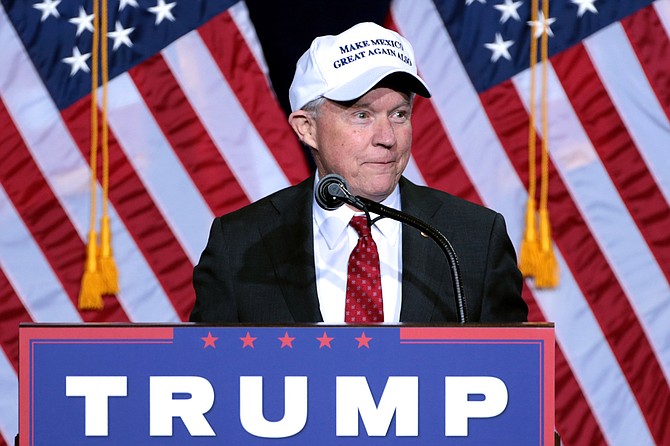 After naming Jeff Sessions attorney general, Trump soured on him for recusing from the Russia investigation, calling him a "traitor" and a "dumb Southerner" according to a book by Bob Woodward. Here, Sessions speaks at a Trump-Pence campaign rally in August 2016. Photo by Flickr/Gage Skidmore

JACKSON — President Donald Trump once described his attorney general, Alabama native Jeff Sessions, as a "dumb Southerner," according to a new book by journalist Bob Woodward.

Woodward—who is legendary for having been part of the duo that broke the Watergate scandal that doomed the Nixon presidency—recounts the episode in his book, "Fear: Trump in the White House," which releases Sept. 11.

During a conversation with then-White House Staff Secretary Rob Porter, who resigned in February amid allegations of domestic violence, Trump called Sessions a "traitor" for recusing himself from overseeing the investigation into possible Russian collusion with the Trump campaign.

"This guy is mentally retarded," Trump told Porter, mocking Sessions' southern accent. "He's this dumb Southerner" who "couldn't even be a one-person country lawyer down in Alabama."

The Washington Post teased the excerpt in an article Tuesday.

A separate report in Politico on Aug. 29 also described Trump as mocking Sessions for his southern roots.

Sessions "talks like he has marbles in his mouth," Trump told aides, complaining that Sessions' accent made him incapable of defending the president on TV, according to Politico.

Trump also criticized Sessions for his lack of an Ivy League education, the report said. While Trump attended the University of Pennsylvania, which is Ivy Leage, Sessions attended Huntingdon College in Montgomery, Ala., a private liberal-arts college.

Since Sessions recused himself in March 2017, Trump has repeatedly floated the idea of firing Sessions, but so far aides have been successful in convincing him that it would only help Special Counsel Robert Meuller find cause for obstruction of justice charges. Mueller is heading the investigation into Russia's actions in 2016 and possible coordination with the Trump campaign.

The Washington Post previewed other revelations from Woodward's tome as well.

After Trump delivered a speech condemning the white supremacists and neo-Nazis who rampaged in Charlottesville, Va., leaving counter protester Heather Heyer dead, the president vented to aides that it was "the biggest fucking mistake I've made" and "the worst speech I've ever given," Woodward writes.

When then-White House Chief Economnic Adviser Gary Cohn, who is Jewish, told Trump he was resigning after Charlottesville, Trump accused him of "treason" and convinced him to stay on, Woodward wrote. Cohn resigned in March.

"When you put a snake and a rat and a falcon and a rabbit and a shark and a seal in a zoo without walls, things start getting nasty and bloody," Priebus told Woodward.

Trump denied Woodward's reports in a tweet Tuesday, calling the quotes "made up frauds," the book "a con on the public," and accusing Woodward of being "a Dem operative."

In a 2013 tweet, Trump defended Woodward after the Obama White House criticized his reporting. "Only the Obama WH can get away with attacking Bob Woodward," Trump wrote.

Trump's 2013 tweet came after Obama's press secretary called Woodward "willfully wrong" for an op-ed he wrote on the administration's efforts on a budget deal with Republicans in Congress.

The Washington Post also released an Aug. 14, 2018, recording and transcript of a phone call between Woodward and Trump about the book.