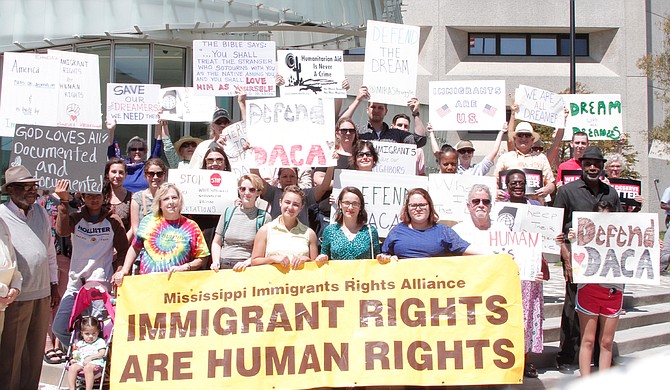 Young people with DACA status are in flux on a weekly basis depending on what the court says, then the White House, then the court in an endless feedback loop that seems to scream, "Does anyone care?" Photo by Arielle Dreher.

Families are literally being separated. Immigration and Customs Enforcement officers are arresting more undocumented immigrants now than under the previous administration—nonviolent undocumented men and women as Donald Trump uses scare tactics about dangerous immigrant gangs to justify deportations and splitting up families for just the crime of being undocumented. Many of them fled danger and can be killed or "disappeared" if they return.

Young people with DACA status are in flux on a weekly basis depending on what the court says, then the White House, then the court in an endless feedback loop that seems to scream, "Does anyone care?"

Mississippi's two senators, both supporters of Trump's border wall, doubt the Senate will take up immigration reform in 2018. With more than half a year to go, leaders are leaving families in limbo. State taxpayer dollars are supporting enhanced border security, as the Mississippi National Guard joined several other forces to be a presence on the southwest border between the U.S. and Mexico.

While leaders put off creating any solutions, ICE and the U.S. Department of Justice are implementing their own kind of deportation plan. Attorney General Jeff Sessions wants to have more oversight and say-so into how immigration judges can rule.

Technically, the country's immigration courts are under DOJ's jurisdiction, and as Dara Lind writes for Vox, this means Sessions' power could only increase in the coming months. "[E]ven when a DOJ judge makes a ruling in an immigrant's favor and ICE prosecutors don't try to appeal the ruling, the attorney general's office could sweep in and overrule the judge," Lind writes.

Federal private prisons run by corporations—funded with taxpayer dollars—are the real winners to this approach, particularly if undocumented immigrants are charged in federal court and forced to sit in prison before being deported. The longer Congress waits, the more people will be thrown into a system with apparent rules that Sessions could change whenever he wants.

Congress must act to preserve DACA, implement measures to keep families together, and provide a path to citizenship for all immigrants who have done what they believe is best for their well-being and just do not have the documentation to prove it.

Meantime, if the U.S. is serious about saving lives on either side of the border, it is time to seriously reconsider the escalation of a shortsighted "war on drugs" that Sessions loves to fight.