Ringing the Bell on Kids Charged as Adults 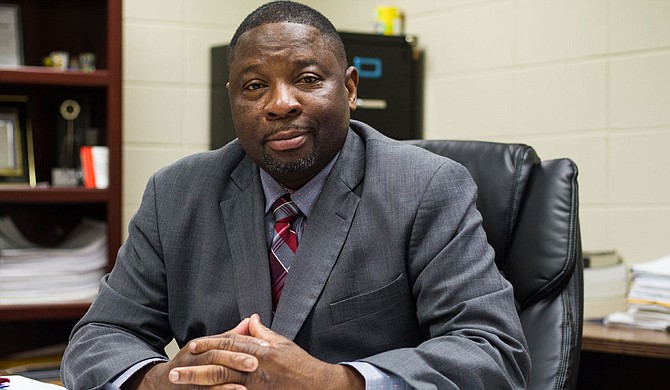 Johnnie McDaniels, executive director of the Henley-Young Juvenile Justice Center, wants law enforcement and the Hinds County district attorney’s office to stop the “finger pointing.” He says youth charged as adults are sitting in his detention facility for more than 100 days. Photo by Stephen Wilson.

"It is easier to build strong children than to repair broken men," Douglas wrote in 1855.

"And I'll add women to that," McDaniels said in an interview at the youth detention center on Feb. 28.

McDaniels' job requires him to repair broken children, especially those who have been charged as adults. Many of them sit in his facility for the better part of a year awaiting court dates, convictions and indictments.

Meanwhile, those exclusively in the youth system tend to be in and out in a maximum 21-day window, as a consent decree between Hinds County and plaintiffs in a 2011 lawsuit over the conditions at the center mandates. Mississippi law and youth-court rules allow 90 days for the initial delinquency youth-court hearing process after the youth-court prosecutor files the petition in a child's case.

In reality, at least half the kids currently in the Henley-Young detention center are presumably innocent. Their inability to post bail or a judge revoking it at their initial hearing forces them to stay detained until they either find the money or the district attorney's office assigns their case to the docket, which takes time.

Of the 23 juveniles in the facility as of Feb. 28, a dozen are charged as adults—11 boys and one girl. Of that dozen, nine have been at Henley-Young for more than 90 days, and only two of them have been indicted in Hinds County.

Overall, McDaniels has seven juveniles who have been there from 102 to 178 days without an indictment.

Juveniles charged as adults get all the protections and services those under 18 receive—regular school schedules and mental-health counseling—but they suffer all the backlog embedded in the adult system as their childhoods tick away. McDaniels is worried about what long-term stays do to the youth there, but also whether what is happening as a potential result of political pressure, case mismanagement and finger-pointing violates juvenile rights.

"It is constitutionally suspect to me that a 16-year-old or a 14-year-old charged with a serious offense, which they could get life in jail for, will sit un-indicted for 178 days," McDaniels told the Jackson Free Press.

Juveniles Get Due Process, Too

A 15-year-old Arizona boy named Gerald "Jerry" Gault helped change the juvenile-justice system in the 1960s. A friend made an obscene call to a woman while at Gault's house, and when the woman filed a complaint, police arrested Jerry without notifying his parents nor mentioning his legal right to an attorney. Gault's mother could not bring him home, and a week later he was sentenced to nearly six years in a juvenile-detention facility. 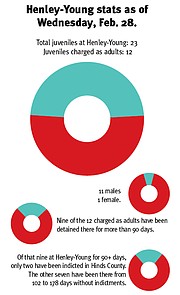 As of Feb. 28, 2018, nearly half of the juveniles at Henley-Young Juvenile Justice Center are being charged as adults.

Three years later, in May 1967, the U.S. Supreme Court ruled 8-1 in Gault's favor, establishing juveniles' right to delinquency proceedings under the same due-process rights adults have in criminal trials. That includes the right to counsel, timely notification of charges, the right to appeal and the right to avoid self-incrimination.

"Under our Constitution, the condition of being a boy does not justify a kangaroo court," Justice Abe Fortas wrote in the 1967 opinion.

The justice added that in the "traditional ideas" of juvenile court procedure, authorities should have considered whether it was a prank that parents could have dealt with at home. Fortas also pointed out that Gault received much harsher punishments as a juvenile than he would have if he were 18 at the time—the maximum punishment would have been a fine of $5 to $50, or imprisonment in jail for not more than two months, he wrote.

More than 50 years after that landmark decision, Mississippi juveniles get placed into the adult system at the law-enforcement level when he or she is still presumably innocent—often with media publishing mugshots and asking for "perp" walks for video of the accused children.

Patrick Webb, an associate professor of criminal justice at St. Augustine's University, a historically black college in Raleigh, N.C., has done research on the relationship between media coverage and juvenile proceedings.

"Exposing children to 'hey, look this is what can happen to you, look at this perp walk, look at this kid behind these bars,' it may frighten him and it may expose him, but it's not going to change his thinking," Webb said in an November 2017 interview. "It will only frighten him and shock him and entertain him and leave an impression, but that impression will not be permanent, and it will not lead to a change of behavior."

In other jurisdictions in the U.S., youth under 18 go before a youth-court judge who decides on the level of the charges and if the juvenile at hand will be treated as an adult before being subjected to the potential damage of a media circus.

McDaniels says Mississippi should adopt the latter practice, but for now, at least, he wants law enforcement and the district attorney's office to take ownership over moving juvenile cases through the system swiftly.

"It just kind of depends on who I'm talking to in terms of what answer I get," McDaniels said, "which is frustrating in a sense that someone should say at that point the court should be involved in this process."

Regardless of fault, juveniles sit awaiting justice in cases that might not have necessary evidence to move their charges forward. Many young people are detained after their bond hearings, so even if a judge decides to kick their cases into youth court, they have to wait to get onto the docket to do so. The longer the juveniles are away from their community, schools and family, the more frustrated they get, McDaniels said.

Having spent a decade as a city prosecutor, McDaniels said he often puts his "old attorney hat on" to explain where kids charged as adults are in the process, especially when they do not understand why they have not gotten bond or why their stint is so long this time versus other times they may have been to the facility.

"But for the most part ... some of them understand the seriousness of it, and that (they) may leave here, and the next stop may be Parchman," McDaniels said of the notorious prison in the Mississippi Delta.

McDaniels said other kids tell him: "I'm not guilty of what they're accusing me of, but I've been in here for 170 days. Mr. McDaniels, that's not fair."

McDaniels is particularly sensitive to how juveniles are treated in the media before they get there.

On Feb. 26, the mayor issued an executive order banning the police from sending out mugshots of civilians that officers shoot, and said at the press conference that he would also have JPD stop giving out mugshots of juveniles, even if they're being charged as adults.

Before that, JPD sent out and tweeted mugshots of kids as young as 13—the minimum age one can be charged as an adult in this state.

Weeks ago, JPD disseminated one of a 14-year-old girl charged with capital murder and already in custody.

But, Webb says, these fear-backed, short-term measures like "Scared Straight" tough talks and media "dog-and-pony" shows only create temporary behavior changes. He says the best way to discourage anti-social behavior is not to intimidate or shame the person.

Backed by research, McDaniels fears that some of the same juveniles "castigated" on local TV news may have difficulties going back into school, classroom settings and the community because of the coverage, even if nearly a year passes before they are indicted.

"There's always political pressure on a case that has been highlighted in the news, and the community has a bunch of perspective on what they think has occurred, but the facts may not be what they suggest," McDaniels said.

McDaniels wants law enforcement and the Hinds County district attorney's office to stop the "finger pointing" at each other and work together for a solution.

"That's not a mean-spirited criticism of any of the other parties that are involved in this process, whether it's law enforcement, district attorney's office, or whomever," McDaniels said in the interview.

"But, I think we have to ring the bell at this point and say that the current system is simply not working, and we've got to do some things different in Hinds County."