Johnnie McDaniels: ‘I Pray, I Plant, and I Plow’ 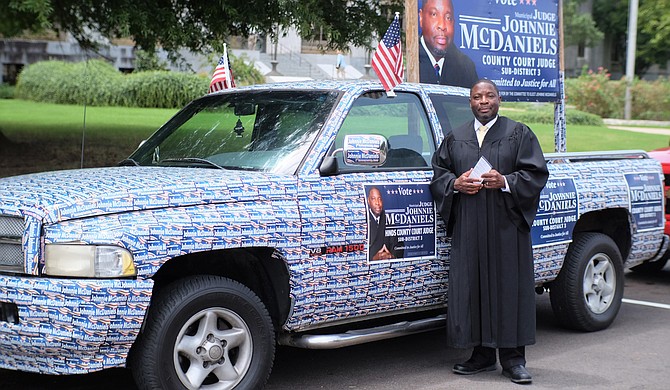 JACKSON — Johnnie McDaniels and his sons spent three days taping 1,411 bumper stickers all across his pickup truck. They have not yet thought about how they will get them off in November, because he is too busy campaigning to become Hinds County's new youth-court judge.

McDaniels has spent the last three years as the executive director of the Henley-Young Juvenile Justice Center in Jackson. He inherited a facility that has been under a federal consent decree since 2012. A federal court monitor once referred to the youth jail as "dungeon-like."

In the last calendar year, the facility began admitting juveniles charged as adults for pretrial detention. If elected, McDaniels hopes to create a pipeline that gets their cases on the docket more quickly. Some kids at Henley-Young have been in the facility without indictment on adult charges for nearly a year.

Hinds County Court has three judges, one of whom presides over the youth court. The senior county-court judge assigns a judge to the juvenile docket, and that is who McDaniels hopes to become November if voters choose him to fill Judge Bill Skinner's seat. McDaniels believes this would be a natural progression from leading Henley-Young. He unsuccessfully ran for the same position four years ago before he became director of the facility.

The youth-court system in Hinds County is currently split in two: Skinner presides over the abuse and neglect docket, and Judge Melvin Priester Sr., who is running for re-election, has been over the delinquency docket. McDaniels wants to change this.

"A kid who's been subject to abuse and neglect could very well have some delinquency issues, and he (or she) certainly shouldn't be hauled into different court settings," he told the Jackson Free Press in an interview in our office on Aug 10.

Since he officially began campaigning in February 2018, McDaniels has been on a 100-church tour throughout the county. When he spoke to the JFP, he had already visited 50. As the son of a maid and a sharecropper from the Mississippi Delta, McDaniels says he learned the "3 P's" of good politics from them.

What made you want to run for this position?

[T]he youth court has to have a functioning youth-court judge who is engaged in every aspect of that system, who understands the connection between services that children should be provided when they're in detention and certainly alternatives to detentions.... I was of the position that you can't lock your way up out of where we are now.... There's a way to improve our system, both the juvenile-justice system and the adult system, (and) keeping our communities safe being at the forefront of that....

What I think has been the absolute failure of the juvenile-justice system in Hinds County for the last eight to 10 years (is) this one-shoe-fits-all approach. Detention first without looking at alternatives is problematic, and we're going to change the direction of that.

Talk about your hope for juveniles charged as adults in Hinds County.

They are, in fact, juveniles with all these constitutional protections and safeguards still in place, but they are in the adult system. They are not part of the youth court, they are part of the circuit-court system.... Some of them may receive a bond, some of them may not receive a bond. They will be a part of a system here in Hinds County that has had its challenges in terms of how quickly people who are accused of various offenses ... go to trial and whether or not they're languishing in Raymond (adult detention center) or anywhere else. ...

[O]ne of the things I am going to advocate for as a youth-court judge is the creation of a juvenile-charged-as-adult docket that is separate and distinct from the adult docket for Hinds County. Those individuals who are charged as adults who are housed at Henley-Young ... should have their court proceedings conducted in the youth court building.... When you have a juvenile charged as adults that's been in a facility like Henley-Young for 300 days unindicted, that's a problem, an absolute problem. ...

I think that there has to be a way for our circuit-court judges, our county-court judges and our district attorney's office and law enforcement and public defenders and others to fix that part of the system. There has to be a way to determine why they hadn't been indicted.... Those determinations need to be made a lot faster in Hinds County.

Absolutely. Our laws in the state of Mississippi allows law enforcement to make determinations as to whether or not kids are going to be charged as adults, and I will continue to be adamant that the youth court should absolutely be a part of that determination. There should be a review of juveniles who are charged as adults to determine whether or not their cases should remain in the adult system or whether or not they should be transferred or remanded to the youth court. And those are just factual determinations that shouldn't be left solely to law enforcement; there has to be other entities taking a look at it.

We talk about juvenile-justice reform or criminal-justice reform—those are the heavy things that we have been behind on in the State of Mississippi and Hinds County.... There is an absolute way to make sure that our communities are safe ... the right people that need to be in jail should be. ...

You have two opponents. What is your strategy?

What I tell voters is I've spent a lot of long, hot summers down in Claiborne County where I grew up. I listened to my mom sing gospel songs to comfort her concerns, and one of her favorites was "May the Work I've Done Speak for Me." My strategy has been simply to talk about the work I've done.

No pun intended, but I'm not a Johnnie-come-lately to this process.... I spent 13 years as a prosecutor in this city.... I understand how that system works. I've amassed expert knowledge on the issues associated with juvenile issues here in Hinds County ... where kids were going simply from school to Henley-Young to Raymond to Parchman.

Certainly, my experience as a municipal court judge (in Utica) where I have had an opportunity to call balls and strikes (helps), and that's what I would do as the next Hinds County Court judge.... When I talk to voters, I say, "Look, on day one I won't have to go out and get measured for a robe, I'll go to my closet, take my robe down and put it on and go to work."

I am certain that I am the only person in my race who is a part of the Hinds County Criminal Justice Coordinating Council, where we meet frequently with the circuit judges, with law enforcement, with mental-health professionals, with all the people who have a stake in this process to discuss these issues.... You have to come to the table with strategies to improve the system, not just talking about it in the abstract....

I tell people I'm the son of a maid and a sharecropper, so I know I've got to work hard from sun up to sun down....