EDITOR'S NOTE: Move ... Because Your Life Depends On It 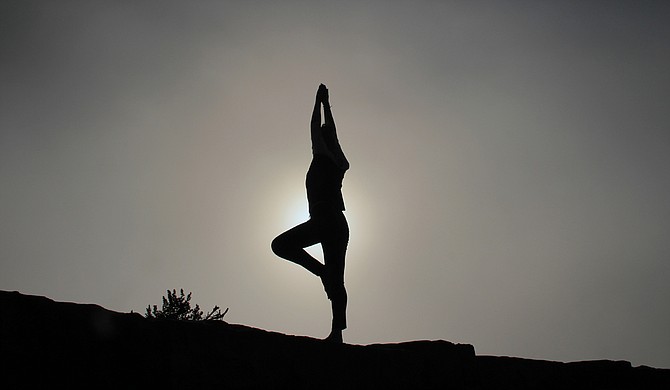 For people who tend to be high-strung and stressed out, slower-paced yoga classes can help them combat anxiety and reset their brains to a more natural pace. Photo by Unsplash/Patrick Hendry

Even late at night, there's always something happening at the rail yard in midtown. Trains are coming and going. Even when sitting still, they're making noises: the hissing as gas expels, the popping as cars get ready to move, the low rumbling the trains make when they move. When you stand on the Charles Tillman pedestrian bridge as they move, you can feel the movement beneath your feet. It's a neat experience. Not to mention all the cool, free artwork there is to look at.

Believe it or not, it's a really great place to run. You get to tune out the rest of the world and just experience that gloriously industrial stretch of road, while doing something active. And the interchanging swaths of sidewalks, potholes, broken glass and tall grass turn a run into a weird obstacle course.

Running can be a polarizing experience. You either love it so much that you want to do it all the time, or you hate it and never want to do it. Hating it is totally understandable. It requires a substantial amount of energy, and you lose a decent amount as well. If you want to last for a while, you have to control your breathing. When you're out in the world running, it can be hard to control speed, which makes you tire faster. For people who have joint or muscle problems, it can be painful. And if you aren't careful or watching where you're going, you can injure yourself.

But running can also be one of the best experiences, even for mental health. Scott Douglas wrote in Runners World about how people often use the practice as a kind of therapy for anxiety and depression. He uses one example of a woman who miscarried while two months pregnant and then fell into a deep depression. She began talking to a therapist, who asked her what her pre-depression hobbies were. She revealed that before she had gotten pregnant, she planned to run her first marathon in New York City. Her therapist suggested she use that goal to fight her depression.

The woman told Douglas that running helped her bring a sense of accomplishment into her life and also helped her find a way to process her thoughts differently. Douglas himself says he uses the practice as a way to combat his own mild depression. And for me, I can always tell I'm either depressed or frustrated with life when I end up binging TV shows, so I've started running instead.

Running is an intense exercise, though, so while it may be amazing for some people, it may be tough for others. But find a thing you can do, and do it. Before starting any exercise regimen, though, it's always best to talk to a health professional.

It isn't necessarily what you do; you just have to do something. We all do. We all know the statistics: Thirty-seven percent of Mississippians are obese. We're the second-fattest state in the U.S. The adult hypertension rate in 2015 was 42.4 percent, and it was 13.6 percent for diabetes. And the list goes on.

Obviously, our state is not the healthiest place in the world. I mean, we fry almost anything (which is so delicious but so unhealthy). But we could be the healthiest, or we could at least strive for it. A key aspect is becoming more active. It is hot, but even through the Mississippi heat, being in the sun can make you feel better. Being in the sunshine increases serotonin in the brain (the chemical that makes you happy), and you also get vitamin D. Wear sunscreen and drink lots of water, though, because skin cancer and heat stroke are no joke.

We should do things, period. Exercising things. Running. Walking. Jumping jacks. Swimming. Ultimate Frisbee. Do whatever thing you can stand (because you shouldn't do exercises you hate), because sadly, being lazy isn't always a good thing.

In this week's cover story on yoga, Tara Yoga owner and lead instructor Tara Blumenthal said some of her clients have told her they didn't know they could lose weight or lower blood pressure through yoga.

"A lot of people assume yoga is just stretching, but what we do at our studio encompasses strength-building and mobility and balance," she said.

For people who tend to be high-strung and stressed out, she said slower-paced yoga classes can help them combat anxiety and reset their brains to a more natural pace.

"For somebody just starting out in yoga, I'd say to come in with an open mind, that the possibilities are endless," Blumenthal said.

Yoga and running are just two things on an endless list of possibilities, and the reasons you should exercise are also endless. A list from Lifehacker.com shows that besides losing weight, exercise can also improve our memory, make us have better posture, boost confidence, provide stress relief, sleep better, get sick less often and have more energy in general.

Our ancestors ran because their lives depended on it, but now we don't have to run from things as often. But we should still run and be active because our lives and our health depend on it.

Luckily, the Jackson metro area has a lot of parks and tracks to get started at—Parham Bridges, walking tracks on college campuses, Flowood Nature Park, I can't name all of them. If you don't like one of those, there's always LeFleur's Bluff State Park, or you can chart your own route in the city (my personal favorite).

Our brains are wired to see things that require effort as a threat, so for some people, it may be difficult to just begin. But it's important to start somewhere.

Managing Editor Amber Helsel is a storyteller and artist. Her hobbies include an-noying her cat, going on adventures, listening to excessive amounts of EDM and running sound at CityHeart Church. Email story ideas to [email protected] freepress.com.