Jackson May Decriminalize Pot Possession of 30 Grams or Less 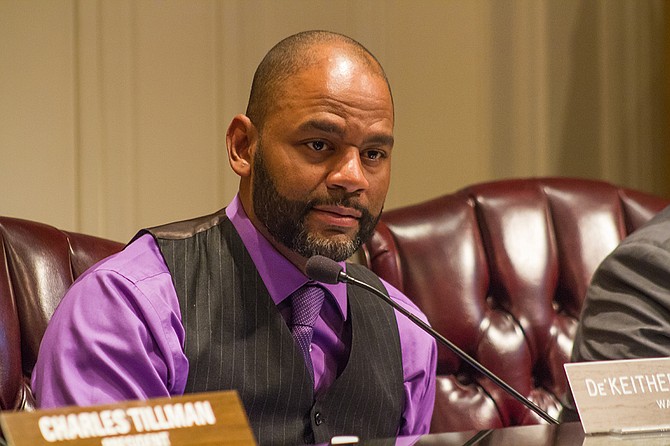 Ward 4 Councilman De'Keither Stamps proposed a change to Jackson's ordinances at a Jan. 30 city council meeting that would decriminalize possession of user-level amounts of marijuana. Photo by Stephen Wilson.

JACKSON — Ward 4 Councilman De'Keither Stamps proposed a change to Jackson's ordinances that would decriminalize possession of user-level amounts of marijuana.

If the ordinance passes, those in Jackson with possession of 30 grams of marijuana or less would be fined no more than $100 and would not be sent to prison for any term. Prescription marijuana would not be subject to these same penalties, however.

"We're introducing this to decriminalize user level amounts of marijuana because for far too long we have made a practice of turning users into criminals," Stamps said at the council meeting on Jan. 30.

The ordinance also suggests training for the Jackson Police Department to learn the difference between the proposed City ordinance and State law. The City will hold a public hearing before the ordinance shows up on the next agenda for the council meeting on Feb. 13 at 10 a.m.

State law enforces punishments for marijuana possession of 30 grams or less by a fine of $100-$250.

Stamps wants the City legislation to halt the pipeline that begins with low-level arrests for possession, for instance, and sends people into a life of crime, gangs, and ultimately prison instead of into higher-level education.

Those who spoke at the meeting, including the mayor, complimented Stamps for his work to get on board with the movement to decriminalize marijuana so that law enforcement can focus on worse crimes such as murders, opioids and big-time drug suppliers.

"I have never used marijuana," Mayor Chokwe Antar Lumumba said. "But, I believe that the detrimental impact of criminalizing individuals for simple usage for something that has shown that it has far less detrimental impact than many of the things that we consume everyday, legally, is the wrong way to go."

A 2013 American Civil Liberties Union study on the racial disparities of criminalizing marijuana showed that although blacks and whites use marijuana pretty much equally, blacks are 3.73 times as likely to be arrested for marijuana possession. The study also says enforcing marijuana laws can cost $3.6 billion annually.

Jennifer Riley-Collins, the executive director of the ACLU of Mississippi, also spoke at the meeting, commending Stamps, but also offering ways the ordinance could be improved so that fines will not lock poorer people into a debtors' prison scheme.

"(The proposed ordinance) could potentially be plagued with the same selective enforcement woes as marijuana criminal laws, and those unable to pay fines could face arrest and imprisonment," Riley-Collins said to the council. "We therefore ask in its implementation that the City of Jackson ensure that those who cannot afford to pay the associated fine because of indigence are not penalized for being poor...."

CORRECTION: This story previously included state marijuana laws for transferring and possession with intent to transfer 30 grams or less. This story has been updated to reflect state-mandated fines for simple possession of marijuana.