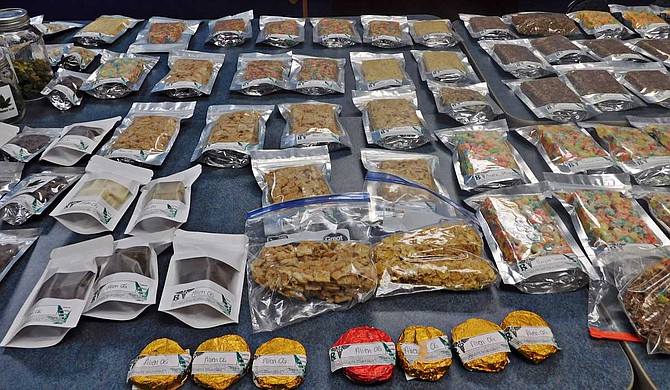 Edibles, marijuana and other items sat on display at a Jackson Police Department press conference on July 16. Photo by Josh Wright

An array of edibles, marijuana, ecstasy, a bong, a ballistic vest, a vacuum sealer and $3,000 in cash sat on a table inside the Jackson Police Department Headquarters. At a July 15 Jackson Police Department press conference, JPD Public Information Officer Sam Brown said officers got information about a gathering in the 2800 block of Woodside Drive on July 12 and confiscated these items.

"At the party, various edible items that contained cannabis was being served and possibly sold at that location," he said.

Brown said the "dispensary party" is a new local trend. He wanted to warn the public about foods that may contain cannabis, he said, especially parents so they could be careful when their kids go to parties.

"We don't know exactly what else is in it. It could be any type of chemical involved," Brown said. "Some of this stuff could be deadly, and we just don't know. You're eating these things, and your body could have an allergic reaction to something."

Brown said he has never seen a party of this event's magnitude. Dispensary parties normally happen in states where marijuana is legal; however, it is not legal in Mississippi, he said. "It appears that some individuals leave the state, they purchase these things, and they bring them back to possibly sell them and make a profit," he said.

Officers detained 15 people and arrested five of them for possession of ecstasy and possession of marijuana with intent to distribute. He is not sure how much jail time the individuals will receive because the investigation is still ongoing.

Last year, the Jackson City Council unanimously voted to decriminalize marijuana, amending Chapter 86, Article III, in the city's Code of Ordinances. This would limit the maximum penalty for possession of 30 grams or less of cannabis to a $100 fine, with no prison time.

During a July 16 press conference, Brown said Frederick Robinson was charged with carrying a concealed weapon and for possession of narcotics. He said a citizen called Precinct 1 in reference to a black male walking along Siwell Road near Highway 18.

"A black bag was tied around Mr. Robinson's waist, and he was saying he had an altercation with his girlfriend at the time," Brown said. "He said he was dropped off near the Hinds County Detention Center in Raymond. He indicated that he was dropped off there to smuggle contraband into the jail."

Officers searched Robinson and found tobacco, six cell phones, cell-phone chargers, cigarettes, cigarette wrapping papers, marijuana, a substance that appears to be embalming fluid, a torch, about 10 to 15 knives, a machete, lighters and other items. Officers intercepted Robinson before he could deliver these items, Brown said.

Robinson did not say where he got the items from, who he was taking them to, what the items were for or how he planned to get them into the jail, Brown said.

"I'm not sure about the process they use. I've heard everything from throwing (it) over the fence to somebody coming to get it, but we just don't know. It never did get to that point," he said.

Brown said the investigation is ongoing and that detectives will get with Robinson for more questions.