Almost Half of JPS High Schoolers Are Not Showing Up for Class | Jackson Free Press | Jackson, MS 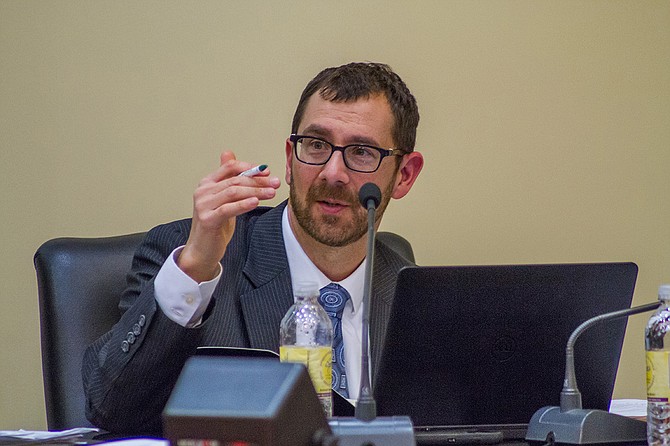 At the Dec. 18 school board meeting for Jackson Public Schools, board members like Vice President Ed Sivak learned that 44 percent of JPS high-school students are truant, and 34 percent have already missed 10 percent of the school year. He flagged the numbers as a "crisis." Photo by Stephen Wilson.

JACKSON — At the midpoint of this school year, approximately 44 percent of high schoolers in the Jackson Public School District are labeled as truant, meaning they missed five or more days of school with no excuses, data from JPS show. Around 16 percent of high schoolers are "habitually truant," meaning they missed 12 or more days of school and risk legal repercussions.

"This seems like a crisis to me. Tell me if I'm overreacting to these numbers," said Ed Sivak, vice president of the JPS Board of Trustees at the Dec. 18 meeting.

Others in the room assured Sivak he was reacting appropriately to the data.

This time last year, 29 percent of high schoolers had truancy issues, with about 9 percent falling in the habitually truant category.

Elementary and middle school students also seem to be slightly more truant in margins that show an increase this school year of less than 3 percent so far.

This year-to-date data show JPS enrollment down by almost 2,000 kids, or 7 percent, and also show a rise in chronic absenteeism particularly at the high school level. While often conflated with truancy, chronic absenteeism tracks those students who have missed more than 18 days of school, or 10 percent of the school year, and includes suspensions, and excused and unexcused absences. Suspensions are not included in truancy data.

Thirty-four percent of JPS high schoolers are chronically absent in this school year so far. The district counted 2,414 chronically absent high schoolers compared to 1,705 at this point last year—a 42-percent increase in high schoolers missing 18 days or more just halfway into the school year. In this category, the lower grades seem to be improving. The elementary schools had 4 percent less absenteeism, and middle schools saw a 5-percent drop compared to last year's numbers.

Chronic absenteeism does not fall under the Compulsory School Attendance Law, but this data set concerns schools more because it deals with the amount of instructional time kids miss.

Jason Sargent, executive director for research, enrollment and accountability within JPS, said that part of the reason for the spike in numbers is because the district recently started collecting better numbers under a state mandate.

Part of the 2016-2017 Corrective Action Plan, or CAP, requires JPS to track absences, suspensions and truancy under the Compulsory School Attendance law. Mississippi K-12 students cannot miss more than 18 days, or 10 percent of the school year. Prior to the CAP, the Mississippi Department of Education auditors had found students being absent for as many as 90 days, or half the school year, and still passing courses.

"One benefit to having that plan is that we have improved our data report," Sargent said at the Dec. 18 meeting. "The good news and the bad news is that we're doing a better job of capturing the attendance and making sure that we identify those kids that have absentee problems. So because our schools are doing a better job of capturing the absences, that's why you're seeing a spike in the data."

MDE's 2018 Chronic Absenteeism Data Report says that when kids missing two or more days per month can set students back one to two full years of learning. Lower-income families do not always have the resources to get their kids caught up on the backend.

"High rates of absenteeism often contribute to a widening of the achievement gap among students from low-income families and other minority groups," the report reads. "Students who are frequently absent from school miss instructional time, resulting in lower performance on coursework, course exams, and standardized assessments."

Newly minted superintendent Errick Greene talked about the importance of going child by child to address the root cause of absences that can stem from health issues, bullying, learning issues, being over age for their grade and homelessness.

"If we as a system, as a matter of practice, sweat every absence, then you start to dig into and push against chronic absenteeism," Greene said. "If every absence is alarming to us, and there's a conversation with families, and there's work with the student to ensure that they're not manufacturing illnesses because they're feeling bullied or othered or not feeling a sense of belonging, all those kinds of things that start to increase absences, then you really start to push against chronic absenteeism."

State law says that when K-12 students have missed more than 18 days due to chronic absenteeism or five to 12 unlawful days due to truancy, the district superintendent or a designee shall report the absences to the school attendance officer, who is supposed to intervene with resources and counseling.

If this proves unsuccessful, the parents and guardians are subject to prosecution, often through youth court, and the superintendent has the discretion to enroll the child in an alternative school. However, this process hinges on districts like JPS maintaining accurate attendance records.

With clear strides in reporting absences, the district leadership now has to work to fix the "crisis" Sivak called out.

Sargent said even if a student has reached the truancy benchmark by law, the school can halt the trajectory toward chronic absenteeism, so long as the child does not cross the 18-day threshold—the point of no return.

"As long the school recognizes that a student's absences are climbing, if they can intervene early and stop the student from accumulating more absences. ... [T]hat percentage is going to get smaller," he said.