Having the Truancy Discussion 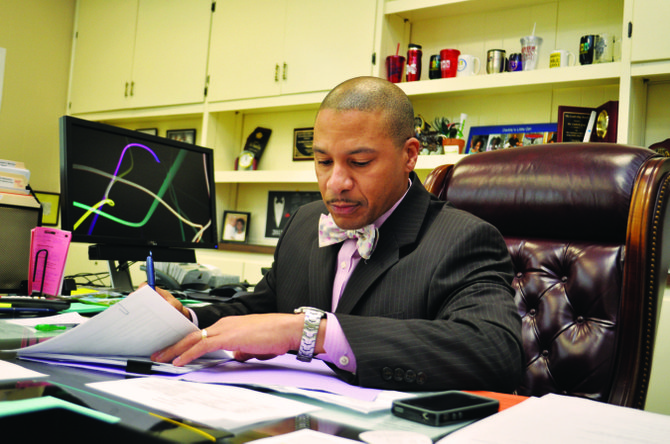 Jackson Public Schools Superintendent Cedrick Gray is supportive of an ordinance that would levy penalties against parents of truant students. Photo by Trip Burns

As the highest-ranking educator in Jackson, he has no peers he can look to—at least in Mississippi—as a model for how to fix the ailing school system. That's because there isn't another school district in the state that faces the challenges JPS faces. Neither does the state have a school system with as much potential as his district.

Last week, the Jackson Free Press reported on an ordinance, proposed by Ward 6 Councilman Tony Yarber, that would put penalties on the parents of JPS students caught skipping school in an effort to get parents more involved in making sure their children attend school. This week, we learned just how big the truancy problem is in the district.

JPS has 30,000 students, 9,000 of which are in high school. That number, alone, helps to explain why truancy laws are so hard to enforce in the capital city. The truancy rate—the percentage of students who record five or more un-excused absences during the last school year—was 39 percent for elementary schools, 48 percent for middle schools and a startling 71 percent for high school JPS students, according to Gray.

"For me, and for all of us, it's a major concern," Gray said. "Truancy leads to un-excused absences, and when you have those, that leads to a failing grade. Unfortunately, that path ultimately leads to negative activity and, based on conversations I've had with our youth court and detention center, the disengaged and disenfranchised student turns to non-productive activity."

The logic is simple. If a student is not in class, he or she isn't learning.

What isn't simple is finding the solution to the problem, as evidenced by a discussion at the United Way's Jackson offices Sept. 12. At that meeting, representatives from the Jackson Police Department, the Hinds County Sheriff's office, the American Civil Liberties Union, the Southern Poverty Law Center, the city of Jackson, the NAACP, and various other groups hashed out questions and concerns about the ordinance Councilman Yarber proposed.

The consensus? It is no silver bullet.

Yarber opened the meeting by sharing his story of property crime taking place in his ward during the day. He said he has had a long list of property stolen from his house and, in one instance, he came face-to-face with a 16-year-old who kicked in his door.

Although the Jackson Police Department was still in the process of gathering data, the officer at the meeting predicted that minors commit 85 percent of property crimes in south Jackson.

Yarber is convinced his ordinance will help by holding parents or guardians responsible for their child's attendance through fines and responsible parenting classes.

Thursday's group had concerns about the measure the way it stands. Some at the meeting thought the fines ($150 for second offense, $250 for third and subsequent offenses) are too low. Others showed concern for the parents of children who have been in and out of youth court and who have done everything they can do to no avail.

"One of our biggest concerns is that (the ordinance) does not address the root problem of why these students are not in school in the first place," ACLU of Mississippi Executive Director Jennifer Riley-Collins said. "Also, this seems to be a solution for the entire city that addresses a neighborhood problem."

Superintendent Gray said he applauded Yarber's effort to take action on the issue, and said he likes to think of the ordinance as one part of a two-part plan.

Yarber said he believes those skeptical of his ordinance should focus on the big picture.

"Everybody in the room is right," Yarber said. "We play different roles, but we need to be working together. It's like the offense and defense are fighting with each other when we are all on the same team."

Fines for parents who are probably already struggling financially doesn't seem like a productive solution to this issue. In my discussions with some school adminstrators in JPS, one thing is apparent, the approach to student learning is trumped by accountability ratings and concerns. Decisions about the curriculum, formative assessment, and enrichment activities center too much around raising test scores. What this does is creates an environment that is not intellectually or existentially appealing to most students in JPS. In layman's terms, scoring proficient and/or advanced on the MCT or SATP does nothing for the college and career prospects for the students, so why is so much time, talent, and treasure in the district devoted toward those aims?

A 71% truancy rate (as defined here inflates the problem, I think), is indicative that many students do not see the relevance in the academic offerings of th edistrict by the time they get to high school. What are the choices being made about texts and assignments being influenced by? Do the students have the opportunity to address real world issues in their social studies and science classes? Is there active professional mentoring/job shadowing taking place where students can see real world application of some of the content and skills they are studying in class? If students cannot relate to the lessons, they cannot relate to schooling, and check out mentally long before they drop out physically.

This solution seems to place the blame primarily on the shoulders of parents. While parents play a significant role, I wonder if any solution to challenges in contexts of poverty (like with JPS) that blames parents is really a solution at all? How much more do you expect these parents to be able to do, realistically? The ordinance has done a good job in raising the issue, and now has brought together a good cross section of the communtiy in dialog, but what has JPS offered in terms of systemic change that will address this issue? A 71% truancy rate is not just an individual family issue, but a systemic challenge. How JPS conducts schooling must be called into question.

I think it's important that we don't get lost in the punitive component of the ordinance. Doing so silences the more real conversations around the issue. That conversation is spun from the question; Why aren't our students going to school 95% of the time? I could care less about the fine component of the ordinance. In fact, you may see that section of the ordinance greatly augmented by the time we are done with it in committee. Actually, the state statute imposes a $1000.00 fine and jail time. No one protested the State sanctions (to my knowledge) that were enacted by groups outside of our community with little or no input from our community. But, I am more concerned with establishing a culture of responsibility, accountability, and engagement for ALL of us. There are several realities birthed from different perspectives. The reality of about 4 of the 7 wards in this city is that too many of our students are not going to school and are walking the streets during the day. Property crimes are sending great neighbors (black folks) running for the suburbs, and those who can't leave screaming for relief. The ordinance does not answer the root of truancy. No ordinance does that. The ordinance is an address of the face of the problem. The answer comes through wrap around services that we will see come to fruition as they are being talked about by groups like SPLC, my office, and the United Way! My responsibility is look seek solutions. We find those solutions through having tough conversations that make us all uncomfortable and challenges the philosophy of our respective institutions. Then, we have to be poised to DO SOMETHING. I'm sensitive to the possibilities of the cons this ordinance brings. I'm also aware of its potential pros. But, to do what has been done is negligent.

I acknowledge that the ordinance has indeed spurred on a much needed discussion about solutions. I was not aware of the community meeting, so I am not privy to the conversations between the SPLC, United Way, your office, etc. I was trying to raise the point that the truant children are making a conscious decision to not participate in the learning experiences taking place in the schools. Considering the alarming truancy and dropout rates of the schools, I was asking what systemic changes, to both the approach to schooling for these children and the business and civic leader practice, were being proposed? From the article, it seemed that the punitive consequences seemed to fall squarely on parents (both between what the ordinance proposed and what the state already requires). How do we hold the school system accountable to make sure that the curricular and instructional practices are relevant to the particular needs and interests of these students? This would give the schools a better chance of capturing students’ minds and hearts as they learn about various subjects. How do we hold the civic and business leaders accountable for policies and practices that encourage residential segregation (such as predatory lending, residential covenants and ordinances which restrict affordable housing for low income residents, police action and city ordinances that criminalize black youth culture –sagging pants ordinances, industrial zoning that causes pollution and other unsafe environmental hazards for too many of these students, etc.)? These things accelerate the concentration of poverty, which is a root cause of things like truancy and dropouts. How do we not only hold parents accountable, but also empower parents to help by providing affordable and safe outlets for children’s creativity and energy? How do we support efforts of the United Way and Boys and Girls Club (among other programs) to provide proven experiences and activities that give children more options? These are the types of discussions that move towards actionable solutions.

I am in agreement with Councilman Yarber. We must do something and now!! I am a homeowner in South Jackson (annexed portion of Byram) and I had my home broken into some months ago by some teenagers who should have been in school during the day!!! Just as I had to be responsible for my children until they were no longer minors, so do ALL other parents!!! In addition, if the kids are not in class, their chance of learning the material is greatly reduced. Parents MUST be accountable as well as the children. Let's stop making excuses and start making PROGRESS!!!

Every child deserves a responsible parent who will hold him/her accountable and push them to develop their potential!!!

I am in agreement with Councilman Yarber. We must do something and now!! I am a homeowner in South Jackson (annexed portion of Byram) and I had my home broken into some months ago by some teenagers who should have been in school during the day!!! Just as I had to be responsible for my children until they were no longer minors, so do ALL other parents!!! In addition, if the kids are not in class, their chance of learning the material is greatly reduced. Parents MUST be accountable as well as the children. Let's stop making excuses and start making PROGRESS!!!

Every child deserves a responsible parent who will hold him/her accountable and push them to develop their potential!!!

I agree that children who are not in school are missing out on learning content and skills they will need to be productive adults as well as more apt to participate in crime . Good parenting will definitely help with these issues. The question I have is whether or not a fine or possible jail time make better parents? Also, how will we hold systems accountable for their complicity in these issues?